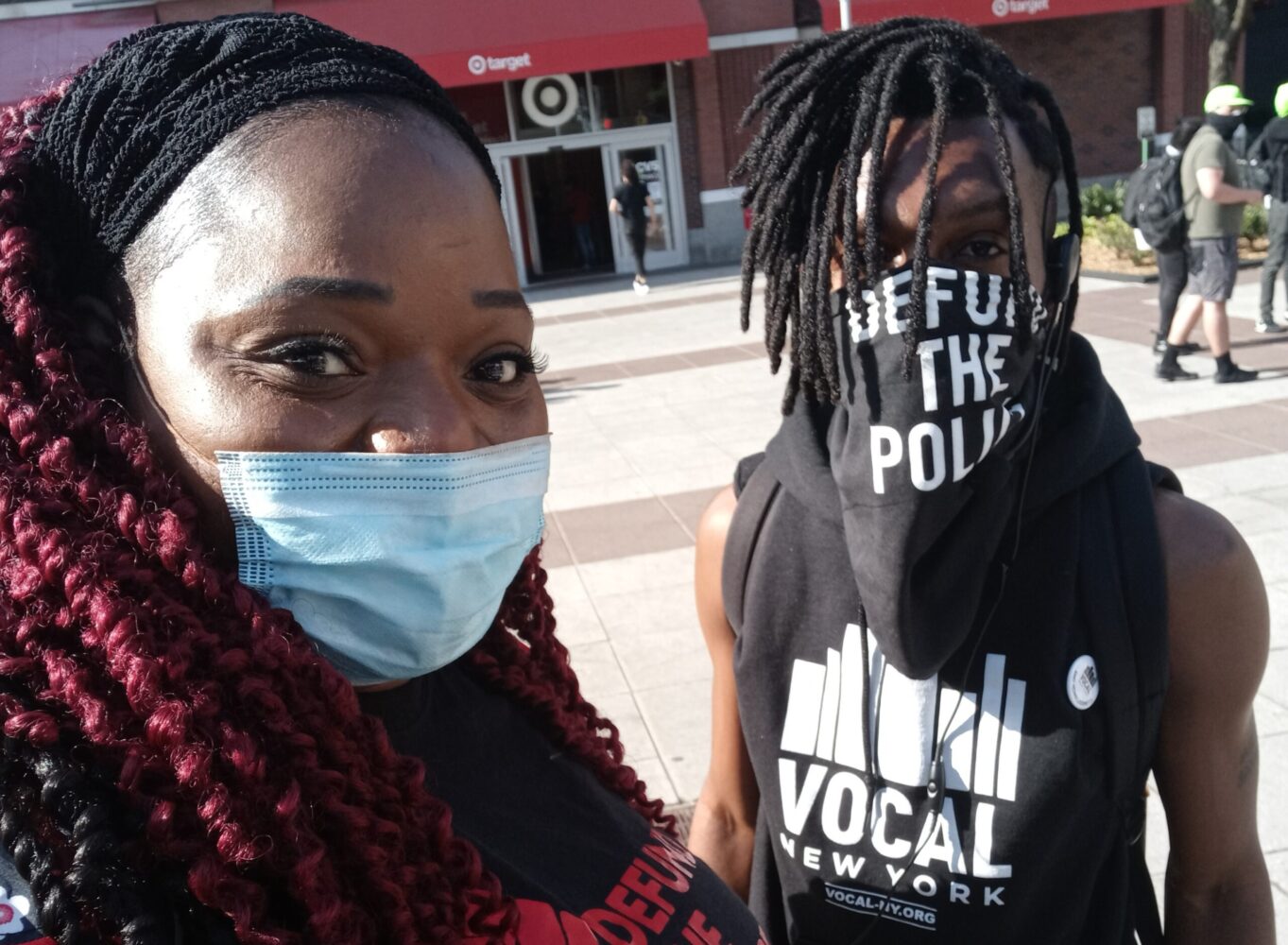 Here, she explains how the movement to defund the police (NYPD) and the movement to abolish family policing (ACS) have shared goals—shifting funding away from systems of policing and instead investing in communities and community-led solutions.

Q. Who organized the march and what was its purpose?

A. The rally was organized by several groups including Citizen Action, VOCAL, Make the Road and many others. It was about defunding the police (#defundnypd) — taking funds from the NYPD, and investing in mental health care, restorative justice, food security, education, housing, good jobs and resources for the communities that have been disproportionately impacted by policing.

The purpose was to raise awareness that the NYPD and policing all across the country has been and continues to be responsible for the killing of Black people. This rally also marked the one year anniversary of the murder of George Floyd and called attention to the ongoing movement to defund the police.

One of the points raised at the rally was that the NYPD has become militarized with high-tech weapons and gear like that of the military in other countries — and that weaponry is disproportionately used to police communities that are Black, brown and poor. In neighborhoods where people who are Black, brown and poor live, there are police everywhere, anywhere you go, while in other neighborhoods, they barely know what the police look like.

We want policing defunded in all forms — including the family policing system. Police do not need to be in schools, either. “School safety officers” don’t make schools safer. Instead, we need to invest in social workers, guidance counselors and other resources for schools. Similarly, at Rise, we are calling for investment in individuals, families and the communities they live in.

Q. Why did you attend the march?

A. I attended the march because, as the community coordinator at Rise, I wanted to learn about the organizations that were there, make connections with these organizations and share information about the work Rise is doing and the movement to abolish the family policing system. I want to get a deeper understanding of what they are calling for — what defunding and abolishing means for this movement and how their calls to action are similar to ours.

The Defund the Police movement is calling for divestment from police and surveillance of families and communities and investment in mental health care, restorative justice, education, housing, good jobs and more resources. We are calling for money to be taken from policing budgets (NYPD and ACS) and for that money to be invested in communities so families have what they need to thrive.

Q. What is the alternative to systems of policing?

A. Police haven’t made us safe. We need to go in a different direction, and invest in communities. Our society doesn’t give people what they need to thrive and barely gives people what they need to survive. That breeds anger, resentment, trauma, harm and hurt. “Hurt people hurt people” — and if we repair the harm and hurt, we don’t need surveillance or policing. But because our resources are invested in police, communities don’t have them. This creates less safety and security for communities — and a direct pipeline into prison for Black and brown people.

Most people don’t just wake up and decide they want to commit a crime or harm someone. People are pushed to the limit by conditions in society. The community will be safe because there will be funding available so that everybody will have what they need — jobs, health care, mental health care, child care, education, vocational services.

Another point that I heard at the rally was that the police never have to ask for money or validate their huge budget, while community-led solutions and organizations often struggle for funding and  aren’t 100% sure that we will continue to be funded. Similarly, despite parents’ opposition to ACS-funded parent support programs, Mayor de Blasio announced plans in May to expand ACS-funded Family Enrichment centers from 3 to 30 centers, at a projected cost of $13.5 million. The city should divest from ACS, an agency Black and brown families distrust and fear, and invest in community-led solutions that support safety.

Q. What do you want parents to know and how can they get involved?

A. “The personal is political” — anything that affects you personally is a political matter. Find out who is doing work around issues that affect you and get involved. Sign up to get involved in our parents’ platform and join our organizing work at Rise.