This series exposes the harm of punishing parents instead of addressing the root causes of family policing system involvement. We provide information that parents can use to advocate for their families and communities and highlight efforts to target community conditions instead of families.

No Escape: The system failed me as a child but now it won’t leave me alone.by Sarah Harris

A Punishment Worse than the Crime: I was charged with abuse but my kids were … Read More

Schools play an outsized role in putting families in the child welfare pipeline. Nationwide, schools are the number one driver of reports of suspected child abuse and neglect to the State Central Registry, accounting for almost 20 percent of calls.

In the coming weeks, Rise will provide immediate information to support parents facing a school challenge—legal information about mandated reporting, educational neglect and “excessive corporal punishment,” as well as guidance on requesting an IEP and negotiating to meet your child’s needs.

We also challenge systems nationwide and New York City’s Administration for Children’s Services and Department of Education to better inform school personnel about mandated reporting and referrals to community-based services so that they don’t make unnecessary reports.

This year, Rise will share parents’ perspectives and recommendations for strengthening families without surveillance and through community.

Too often, when families are struggling, school
personnel, doctors and police are quick to call a hotline instead of connecting
us to resources and support.

Nationwide, child abuse and neglect reports grew more than 12% from 2013 to 2017. Abuse scandals across the country and sensational media coverage of child fatalities in many communities put mandated reporters … Read More 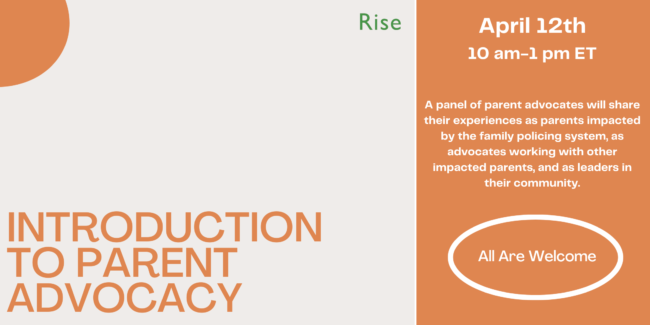 A panel of parent advocates will share how the family policing system impacted them, their families and their journeys in advocacy. They will share their experiences as advocates and leaders in their communities, in addition to how they became a part of the parent advocacy movement. Advocates will reflect on concepts of surveillance, disproportionality, peer support and community care.

This Zoom training is free and all are welcome. It will be hosted by Rise.