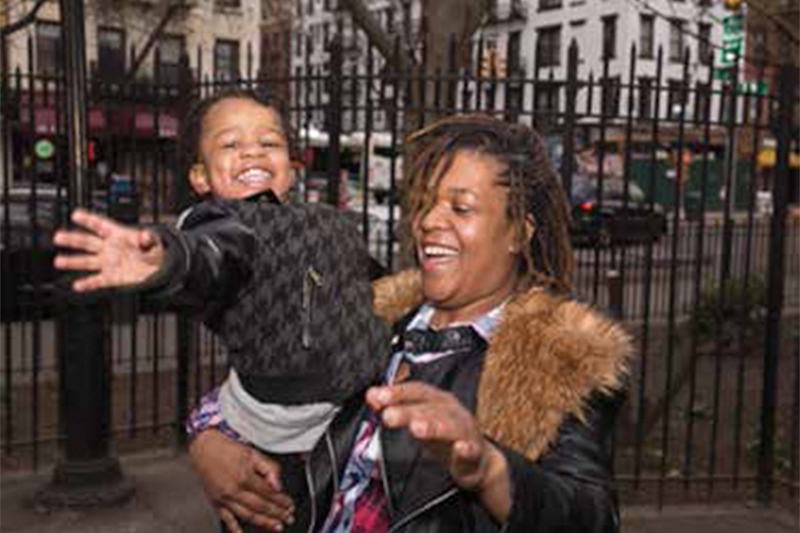 Life after adoption: Sharkkarah and her youngest child

In 2013, I placed my oldest daughter in foster care because I didn’t know how to help her. She was 6 when she started to say that she hated me and her siblings and didn’t want to live with us anymore. One day, after I told her that she could have a piece of cake only after she did her homework, she said, “I hate you, Mommy,” and “I want to kill myself,” over and over.

I had an open child protective case at the time and was afraid of my agency knowing that something was wrong with my family. But I was so shocked and scared that I called my caseworker. She told me to take my daughter to the hospital.

Six days later, the hospital discharged her saying she was the best-behaved child there. But at home, she pushed her siblings and hit them with a broom. When I tried to stop her, she hit me and tried to run out the door. I felt heartbroken. I wanted to help her but I didn’t know why she was hurting.

I’d spent much of my childhood in foster care, and my own children had already spent six months in care because I’d used excessive corporal punishment.

At the time, I was a good mother and a bad mother. I loved my children, who were 2, 3 and 6 when they came home from care the first time. I hugged and kissed them. I took them to the movies and the pool. We had water balloon fights and played in the park.

But other times I’d be mad at the world because I didn’t have enough money, mad at my kids for messing up their room, and I would curse and beat them if they got me really mad. After, I’d hug and kiss them and tell them I was sorry. Somehow they’d still love me. That’s what surprised me.

When they came home from foster care, I promised them they wouldn’t go in again. But when my daughter started acting up, I was afraid that child protection would take all my children. Three days after she came home from the hospital, I felt like I had no choice but to place her in foster care.

A month later, my daughter told her new worker that she’d been molested and that I knew and did nothing to stop it. In truth, I was completely unaware.

After I found out, my heart felt like it was broken, literally. I felt like I’d had a stroke. I’d been molested and not protected when I was a child. I felt horrible that I’d been unable to protect my own child. I felt unworthy to be my children’s mother even though I loved them so much.

When I visited, I wanted to hug my daughter and say, “I’m sorry that this horrible thing happened to you but I’m here for you and I will help you get help.” But the agency said that if I talked to my daughter about it, I would only upset her. They kept me from her like I was the one who violated her.

For several weeks after that, I stopped going to visits because it was too painful to face my daughter. Eventually I became  so overwhelmed—I was also homeless—that I placed my other two children.

I reassured them that I would be back. But I felt so bad for  failing them that I did not go to the planning conference at the agency and I was off track with services for the next two months.

What helped me start working to bring my children home was remembering being in foster care myself. I never wanted my children to feel as lonely as I’d felt. So I began talking to a therapist about my past and present problems. I found support groups, and anger management and parenting classes. Eventually, I began to have the space and the skills to be a calm and loving parent.

After six months, I gained unsupervised visits. The first half hour was supervised. But after that, my children and I had time together without anyone watching or judging. We’d play board games like Tic Tac Toe and Jumping Monkeys. I’d bring sandwiches and chips and we’d eat and talk. Then we’d go outside and play in the park. My younger two, in particular, would tell me how much they loved me, and when I didn’t feel like I was doing my best for them, they’d show me otherwise.

Still, my case moved slowly. Part of it was my attitude. I was so angry at how the caseworkers treated me that I’d yell at them all the time. It gave me temporary relief, but if I had tried to build a positive relationship with them, I could have avoided a lot of pain.

Part of it was that I had to deal with two foster care agencies, five supervisors, and eight different caseworkers during the course of my case. With all those changes, it was very hard to get them to see me as anything other than what was written on paper.

Over the three years that my children were in foster care, I grew very close to my younger children. But my oldest daughter came into care with so much hurt that it was hard for us to heal that pain.

My oldest also lived with a different foster mother than her siblings, and they formed a strong attachment. This, too, made a distance in our relationship. One time at a visit, when I tried to discuss with my daughter whether she wanted to come home, she started crying. After that, the agency told me that I couldn’t discuss the case with my daughter. But I know her foster mother did talk to her about whether she wanted to be adopted.

One thing I did to strengthen  our bond was reach out to my daughter’s therapist. At first I met with her alone. Then, when my daughter was ready, my daughter and I had therapy together.

In the beginning, I couldn’t understand why my daughter hadn’t come to me when someone had hurt her. But the more I listened, the more I understood the effect that my anger had had on her. It felt horrible to realize that I had acted in ways that made it harder for her to talk to me when she was molested. I hated myself for a long time because of that.

After each session, I cried. Even so, I took advantage of every session to get closer to my daughter. In the end, my daughter said that she forgave me and she loved me. But she also told me that she still didn’t feel safe coming home.

CHOOSING NOT TO FIGHT

When my daughter told me she wanted to be adopted it broke my heart. She was 9 by then. Despite all the ways I’d changed, I felt like all she could see was the past.

At the time, the agency had already filed papers in court to terminate my parental rights to all three children, in compliance with federal law, because they had been in care for several years. But because I was making progress in my case, the agency agreed to a “suspended judgment,” which would give me one year to reunify before my rights were terminated. But the agency said it would only agree to the suspended judgment if I agreed to let my oldest be adopted.

Eventually, I decided that my pain didn’t need to stop me from loving my daughter. She didn’t choose just to be with her new mother. She chose to have both of us in her life. I decided to continue to show her that I’m here when she needs me.

A year ago, my youngest children came home, and my oldest was adopted. When I agreed to let her be adopted, I was told that her siblings and I would be able to see her on weekends, holidays and birthdays, but in the last year we’ve only seen her twice.

In the beginning, my daughter would call me every morning and night from her cell phone. But when I’d contact her adoptive mom to set up a visit, she would always say either, “She’s busy,” or “I have to check her schedule.”

Her brother and sister would cry because they missed their sister. Sometimes they’d take it out on me and I’d feel guilty. Other times they’d be angry with her. I’d tell them that they weren’t allowed to blame her.

Then her adoptive mother surprised me on Mother’s Day with a visit. But two hours later she took my daughter away again. My daughter cried all the way to the car and told me she didn’t want to leave us yet.

I told the adoptive mother, “We have to make a way so she can see us more often.” But she got angry. She said it was her day, and that my daughter should be happy that she’d taken the time to bring her at all. Then last month, my daughter lost her cell phone privileges, and her calls have stopped.

WISHING SHE WERE HERE

I mourn the loss of my daughter. But I’ve decided not to go to court to fight for visits because I don’t want to put her through court battles. I also don’t want to risk the possibility of having the visits stop completely.

I hope my daughter knows that I’m here for her if she ever needs me. I hope one day my daughter will be back in my life. In the meantime, her siblings and I keep creating memories without her, wishing she were with us.