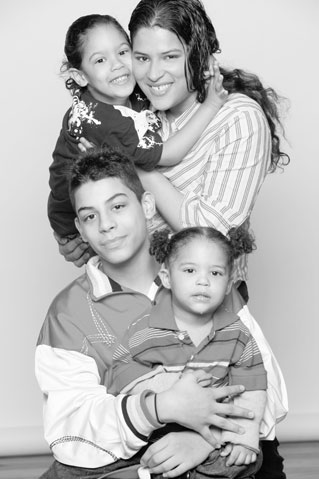 Jeanette with her oldest son, Remi, and Xavier and Zachary.

In 1999, my 2-year-old son Remi was removed because I hit him and my family called child welfare on me. I was only 17 years old when Remi was born. Remi was an all-over-the-place, running around, never-sitting-still type of kid. It was partially my fault. I spoiled him rotten. I thought that’s what I was supposed to do—spoil him and love him to death.

I didn’t know that Remi would get so out of control. By age 2, he was defiant and strong-minded. Yes, he was 2, but I think it was more than that—Remi was recently diagnosed with ADHD. Back then, I did not know how to get him to listen. Besides, in my family, we were raised that if you talk back or get out line, you get your ass kicked.

One night while I was in the shower, Remi climbed out of his crib and went out to the sidewalk all by himself. When I saw that he was missing and found him playing outside, I was shocked and scared and I hit him. I immediately regretted it but the damage was done. When my mom and aunt saw the bruises the next day, they called child welfare. Remi was removed and I was arrested.

Our first few visits were rough. The visits were supervised. They felt like jail. The foster mother, a nasty woman in her 30s, usually sat in the visit room along with her three teenagers and the worker. Being watched and told how to talk or play with my own child drove me crazy. I felt so uncomfortable that I just wanted the visits to end. I wanted to see Remi but it felt like there was no space for Remi and me to bond.

I felt as if I’d lost Remi’s love and that his foster parents had made me out to be a monster. Remi seemed scared of me. He would hesitate to hug me, or hug me and then go back to the foster mother as if I would hurt him. It killed me. At those moments, I broke down and cried, apologizing to Remi: “I’m sorry, my baby. Mommy won’t ever hurt you again. Life will be better for us.”

Most times, Remi was quiet on my lap during visits, just hugging me while I whispered to him our song, “You Are My Sunshine.” Remi was not playful or happy. Before going into care, he loved playing with his Ninja Turtle toys. I brought a new one to each visit, but he had no reaction of excitement. Remi’s sadness also made it seem like everything I said he had done at home was a lie. He seemed to be a quiet, easy kid.
After a few weeks, Remi began to flip out at the end of visits. It felt good that my baby once again wanted only Mom. But it was awful to see him crying even harder than me. How do you explain to a 2 year old, “No, you have to leave with these people. I’ll see you next week.”

That first year that Remi was in care I had such a hard time.

I was so angry at my family for calling in the case that for a long time I didn’t speak to any of them.

Then I lost my grandmother and my big brother, who was my everything. I felt like I was losing everything and everyone. I felt weak and hopeless.

To deal with feeling that others saw me as a child abuser, I put up a front of “I am strong, nothing bothers me.” It felt like my only way to get through it all. I feared that if I let myself feel what I was feeling, I might not have the strength to get Remi back.

The only person I let in on my heartbreak was my fiancé. He didn’t care how I pushed him away and shut down. He took care of me and guided me to be strong. He truly saved Remi, because I almost could not breathe.

My Pain, My Anger, My Hurt

One day, after Remi had been in care for a year, all the pain and anger I had bottled up came out. Remi came in with stitches on his chin. The foster mother said that he had run into a computer table. At that moment, I freaked out, thinking, “They take him from me for hitting him yet they bring him to me with stitches?” I believed that her teenagers had been playing too rough and the mother had covered it up.

I felt like I had taken all I could take. Remi was only three and helpless to protect himself. I grabbed the foster mother’s neck and kept squeezing until the workers took me off. That foster mother felt all my pain, my anger, my hurt.

When I let go, I saw that Remi was scared, and for frightening him I was truly sorry. I told Remi, “I love you and I am not mad at you. They hurt you and that is a no-no.”

I told the worker, “She ain’t taking my baby nowhere.”

I told the foster mom, “Trust me, I will sleep in front of your house to make sure you don’t do anything to him.”

The foster mother left, saying, “I am not putting up with this.”

After that incident, my unsupervised visits were suspended and the workers gave me anger management classes. I thought, “As if I had no reason to be angry!” I felt that the child welfare system was what made me angry and I felt justified in attacking Remi’s foster mom. I was sure that she had hurt my baby and that no one cared.

But my angry reaction got results. Remi was placed with another foster mom. My first impression was that Gladys seemed decent enough. Her kids were grown and she had time to get to know Remi. I was relieved.

A few months later, I was sitting on the floor with Remi, playing “Itsy Bitsy Spider.” The worker came in and said, “You should be doing something educational, or reading to him.”

“Really, you have the nerve. He is 3 years old! He wants to go outside and run and jump!” I said. I felt they had us like prisoners in that visiting room.

She screamed at me, saying, “You can go. I will cancel your visit if you want to have an attitude.”

“Let me bond with my son how we want. Who the hell are you to tell me what he likes and dislikes?” I said. I cursed at her and Remi started crying.
I had just finished one anger management class, but I was sent back to take another.

Luckily, Remi’s foster mom saw our pain. I asked Gladys if I could attend Remi’s doctor visits, school meetings and therapy, and share his first day of camp. Gladys thought that my son and I belonged together. Though the agency didn’t give us more time together, Gladys made it happen!

After school, I would often walk home with them, help Remi with homework, eat dinner with their family, and even put him to bed. She’d always tell Remi, “You are going home with Mommy soon and you will always be welcome here. You will have two homes when you go back to live with Mom for good.”

Gladys loved Remi and made him part of her family. At Christmas, she invited me to come over. Everyone knew him and bought him gifts, and he got hugs and kisses just like the grandkids. It was a great sight but heartbreaking at the same time. I felt like such an outsider. Part of me wanted to snatch him up and say, “They are not your family, I am!” But it was not his fault he ended up there, and I was happy see him in such a loving, caring family.

When Remi had been with Gladys for a year (and in foster care for two years), I was almost done with services and was pushing for weekend visits.

Then one day, my latest worker (I had five in all) told me that my fiancé would have to do all the services I’d done before Remi could come home. That was going to take an entire year! I felt so trapped and bad and overwhelmed that I don’t even know how to express it.

Soon after, I took Remi on an unsupervised visit to Chuck E. Cheese. He loved it, and I loved it. We had so much fun together. Then I realized that we were 30 minutes late to get back to the agency. I rushed Remi out of there and we took a cab back.

The worker was outside with Gladys and the police. “Oh my God,” I thought. “Really? Is it that serious?” The worker said they thought I had taken him and run. She also said that we’d start supervised visits again. I was so frustrated with everything going wrong in my case that I cursed her out.

This time, my worker pulled me aside. “Can I speak to you?” she said. “I am not here to argue with you. I just want you to understand that your actions are setting you back.”

“But I’m sick of people trying to tell me how to live my life and how to act with my son. It’s insane,” I said.

“It might seem that way now, but in the long run, you can be with your son. Try not show anger when something occurs that frustrates you.”

“Everyone thinks that because I’m young they can talk to me like they want,” I told her. “If they want respect, they need to show respect.”

“I will try to talk to you in an appropriate manner,” she told me.

“I will do my best to keep my cool for Remi’s sake,” I said.

Up until then, I hadn’t really understood how my actions were seen. But it did sink in that I was making things worse for Remi. I decided to try to ignore it when I didn’t like the way workers talked to me. I didn’t want to be the cause of my son staying in care any longer.

Looking back now, I realize that the workers saw me as someone who would try to fix any situation with hitting, and my actions did hurt my case. But at 19 years old, I really did not know that telling the workers how I felt would set my case back for months.

I wish that the caseworkers could’ve seen me as a naïve young mother who was raised in a neighborhood where, if you get tough, you get put in your place. I felt that the workers were testing me and wanted me to fail, and that I needed to show them how tough I could be.

The workers had so much power over me, and I was in such an extreme battle within myself. I really needed them to explain things to me in a reasonable way. Instead, they were quick to judge and took the worst out of me.

Ten years later, I’m no longer a naïve teenage mother. I’ve learned that the way that you portray yourself in life is how you get treated, and that little mistakes can make a world of difference. As an advocate, I tell other parents to stay cool and collected during visits, and in all their other interactions too.