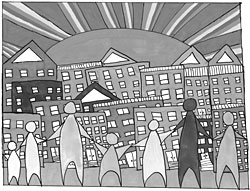 Recently, I facilitated a Family Team Meeting with a mother who was going through tremendous stress. (To protect her privacy, I’ll just call her “Mom.”) Her partner had recently died and she’d been diagnosed with a serious illness. She also suffered from anxiety and depression.

Up until the series of crises in her life, she’d worked, had an apartment, cared for her daughter. But after, she started losing interest in life and accumulating objects in ways that were dangerous for her and her daughter. Her daughter, who was 12, also had developmental and cognitive disabilities and was not developing age appropriately. Eventually her daughter was removed from her care. Mom blamed everyone for the removal and was aggressive toward any case planner that came to her home.

The Importance of Parents’ Perspectives

Before the meeting, I felt some anxiety because dealing with aggression is one of my biggest challenges. But as a facilitator, I also have strong feelings about parents participating in Family Team Meetings and having an opportunity to tell their stories. Family Team Meetings are where we discuss parents’ strengths and supports, the barriers to the child returning home, and possible permanency plans. Because a parent’s input is often critical to coming up with the best plan, over time I’ve learned to manage my anxiety by focusing on the parent’s feelings instead of on my own.

The day of the meeting, I came early so I could welcome Mom, show her my respect and the respect of the agency, and begin to develop a relationship.

When Mom came in she looked angry and anxious, avoiding eye contact. I wanted to open up conversation and validate her feelings so I asked her how her commute was and how she felt coming to the meeting. Mom said she did not want to come because she did not like the agency and no one understood her. I let her know I understood how difficult it was for her to be there.

When the meeting started, I welcomed everyone, and asked the participants to sit where they felt comfortable. Mom sat with her social worker from the Center for Family Representation, her legal services provider. The case planner, the agency case planner and the girl’s foster mother, who was also her grown half-sister, were also there. I informed the participants about the rules of the meeting, and I noticed that when I said “no shaming, no blaming” Mom looked up.

Then I asked Mom to give her version of the story. I told her that I would be writing notes to remember her story. She looked at me surprised. Then she started crying, as if she wasn’t expecting anyone to care what she had to say. I offered her tissues and we all waited in silence until she got ready to talk.

She started to talk about the time before her child was placed in foster care, how they used to go to Broadway shows and the park together. She talked about reading to her daughter and the bond they shared.

As she talked, I reflected her words. I told her, “I hear you,” and I said how hard it must be for her to go through what she was going through.

She felt comfortable enough to talk about how her recent struggles impacted her and her daughter. She acknowledged that she did not know how to handle those stressors.

She also showed that even when she was not in a place to really take care of her daughter properly, she’d reached out for help. She’d hired a babysitter and eventually she reached out to her daughter’s half-sister, now her foster mother. She didn’t like her too much, but she was able to work with her for the sake of her daughter.

Listening to this mother, I thought how often we focus on parents’ struggles and not on their strengths. Pulling out Mom’s strengths allowed her to take an interest in continuing the meeting.

Making Space for Pain and Anger

Next, however, it was time to discuss the risks.

I just felt sad and unable to approach her without getting her upset. But I observed some participants in the room making faces like they didn’t care, like they were expecting her to act the way she did. At the same time, they seemed angry, like she was offending them personally by displaying behaviors that were not appropriate. I felt upset. Those of us who work in child welfare should be more educated about mental health.

Finally I asked Mom if she wanted to take a break. I wanted to give her a moment to not feel the pressure. I had begun to feel more and more anxious myself and I also wanted time to come back to a place where I could put myself in her position.

When I offered her the break, my biggest fear was that Mom might not return to the meeting. So before she walked out the room, I told her it was extremely important for her to return. It was her meeting, and we needed her to help us plan for her daughter. Ten minutes later, she returned seeming calmer.

I reminded Mom of her strengths and I told her we could use some of those strengths in creating a permanency plan for her daughter. I also told her that I knew she had concerns that had not been addressed. Mom said she felt that the system was very invasive. She was also very concerned about her child’s education. I promised that we would return to those concerns before the end of the meeting.

But I also told Mom that everyone at the conference has a voice, and that now was the time to focus on some of the concerns that others had. I explained that if we could not discuss the barriers to reunification, it would slow the process of her daughter’s permanency plan.

I had noticed Mom smile when she’d talked about the activities she used to do with her daughter. I told her that we wanted to bring those beautiful memories back into her life but that to do that we needed to address her own and the agency’s concerns.

After that, we worked together to find solutions. Not everyone agreed on every solution, but I kept reminding the group that we all wanted the child to return home to a safe environment and get Mom the support she needed.

To begin, we arranged for Mom to visit her child at the foster home rather than the agency, which was less stressful for her. Once we did that, she agreed to go to therapy after work, which until then she’d said she was too stressed to do.

Mom was able to hear that her daughter was probably not going to come home quickly but she wanted child welfare out of her life. Because the child was in a kinship foster home, we decided to discuss with the agency and the court the idea of changing the goal to Kinship Guardianship, which would allow the daughter to stay with her half-sister until a judge deemed she could return to her mom, but without the involvement of the child welfare system.

Recovering My Own Strength

After the conference, I felt exhausted and I took lunch to recover. I thought a lot about this mother and all the losses in her life. I also realized how much support I need to manage the strong emotions I experience facilitating meetings like these. I need that support because I care about the parents I come in contact with. I want to have the strength to continue giving them the opportunity to have a voice.

The Power of Participation

As a system, we need to have more training about parents’ challenges, and we need to display patience and empathy with families. We need to be more conscious of the strengths parents have.

Despite the challenge of this conference, I came away impressed with this mom’s strength. She had to be strong to get up from her bed to come to the meeting despite how upsetting it was to her, and to return to the meeting to after she got so upset. Because she returned to the meeting and continue to express herself, we all came away with a better plan.