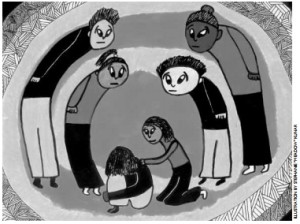 I have worn many hats and held many positions at Sheltering Arms, the agency where I started in the field of child welfare. I’ve gone from intern to case planner to senior case planner to supervisor to coordinator of services for families that have reunified. What I have seen is that parents need to feel supported and accepted to make progress, and their caseworkers need to feel that same support and acceptance from their supervisors to offer it to parents.

When I first started as a case planner, I was allied with one perspective—the perspective of what a child needs to survive. I felt that if parents really loved their kids they would do whatever it took to get them back. I thought that if they didn’t, they must be bad people.

Someone to Believe in Her

One of the first parents I learned from was Ms. S, whom I met in the first few months of starting the job.

When I first met Ms. S she told me that she had five previous children who had all been adopted. She was trying to stay drug-free in order to reunite with her sixth child, her first daughter.

Then Ms. S explained that like her children, she’d been in foster care as a child. She’d also been sexually abused. Being abandoned and abused had led her to develop a drug addiction. When I heard just how hard and heartbreaking her past had been, I began to better understand why she’d been so out of control, why she’d had so many children she couldn’t take care of, and why she hadn’t done what she needed to do to get them back.

Ms. S explained that for most of her life she’d had no one who believed she could do better. Then she’d met her fiancé, and having that one person had helped her turn things around.

Ms. S had a calm demeanor and a sweet personality and I could tell that we could work together as a team to ensure that the kind of abuse she’d experienced didn’t happen to her daughter. I saw the love she had for her daughter and that made a big difference to me as well.

In the two years that I worked with Ms. S, she achieved her GED, completed a substance abuse program, moved into a new apartment with her partner and reached final discharge with her daughter. Ms. S’s resilience and charisma taught me to hear a parent’s story first before placing judgment on them. My feelings about “bad parents” slowly began to disappear. Repairing families became my new mission.

Melting My Wall of Ice

Another parent who changed my perspective was Mr. B.

I remember so clearly the day Mr. B came to my cubicle to discuss the parenting class he’d found in his neighborhood.

Now Mr. B wasn’t my favorite parent. Without going into details, I’ll just say that he had kept secrets from his partner and the mother of his children in a way that hurt her, and I decided from the beginning that he was not someone I thought would be a good father.

Since he was deceitful to his partner, I thought everything he would tell me would be a lie and I decided to let his talking go in one ear and out the other. I thought a person who could lie to the partner he loved would eventually lie to his child.

But our conversation that day slowly melted my wall of ice.

He sat at my desk and waited patiently for me to finish talking on the phone. I noticed him looking at the pictures taped to the desk and the little knick-knacks I had gotten from children during the holidays. As soon as the phone touched the cradle, his first words were, “I can tell you love what you do. It shows.”

As I began to engage in conversation, Mr. B explained his story to me.

He explained his past lifestyle of random sex partners and drugs, which landed him in jail. While in jail he’d realized that there was more to life than just sex and drugs. The moment that really changed his life, Mr. B explained, was the passing of his mother. The fact that he never got a chance to say goodbye to her became a pivotal moment that made him stay on the path to recovery. He didn’t want to leave this world without having a positive relationship with someone.

Mr. B told me how people never listened to him and that I was one of the first people who had. I was struck by how open Mr. B was and how thoughtful about the mistakes he’d made.

Listening to Mr. B helped me to understand him and all that he’d done. It also helped us build a bond that allowed him to get full custody of his son within a year’s time.

With Mr. B I realized that my relationships with parents seemed to work when I allowed them to talk and I just listened. More than it being a technique, I learned to put down my guard and open myself up to accepting other people’s realities.

Now, as a supervisor, I try to let workers share their thoughts and feelings in the safe haven of my office, just as I did with parents.

It’s extremely important that workers feel supported on the job. Since I started, I have seen many workers leave the agency, including almost all of the workers I started with. This impacts parents. When workers leave and parents have to tell their stories over and over again, parents feel defeated and disrespected. When workers leave, other workers and supervisors also have to take on additional work, which makes connecting to each family that much harder.

If we want to reduce the impact of turnover, we need to provide the support that workers need to stay.

During supervision, I don’t just go over the work. I make time for a bond to grow.

At times, workers may share anger or frustration, or they may sit quietly, not talking about problems even though I know they’re not getting their work done. That’s when I pull them aside to talk or vent. Other times people just need to feel appreciated so I buy breakfast or leave a sticky note to make them smile. Small things matter to people.

I also try to create a community of support around workers. When I have unit meetings, I leave time at the end for workers to discuss things going on outside the office or how they’re feeling about the job, including when they’re feeling overwhelmed. Workers who are better able to handle the pressure often help others figure out how to find balance in their work lives.

Sharing My Own Vulnerability

Just like when I started out, many workers need support learning to understand families and to examine their biases. Other workers need support managing their disappointment when families don’t reunify. Many case planners really do want successful endings. They often need support to believe their hard work and dedication is important, even if every case does not end in reunification.

When workers are struggling with biases or disappointment, one of the most important things I do is allow them to know that I have gone through my own struggles in the job as well. I believe that when I share my own vulnerabilities, that translates into workers feeling more open and accepted. Workers can be more open to listening to parents, and more able to show parents that they are there to help them grow, if they feel that they have the room to make mistakes and grow as well.