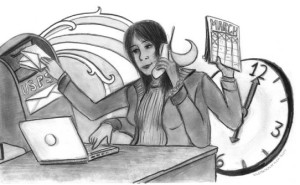 I took the job of case planner because I wanted to help families, particularly parents.

I believe I have the ability to empathize with people without judging them. I grew up poor in Harlem in the 1980s. My mother received public assistance, and drug trafficking was all around in my neighborhood, so I understand that people can struggle when life is hard.

Before I took the job, I had earned some graduate credits toward a degree in social work. In my job, I tried to practice the social work skills I learned, like empathy and respect. I tried to meet clients where they were. Because of that, I developed a good relationship with many of the parents I worked with. But I found the job very difficult.

When I first started, I was told I would have 8 to 10 cases. Three weeks later I had 13. If a case planner quit, or another case came in, the load would increase. Working 13 cases was overwhelming. Imagine having 13 kids as a single parent; well that’s how I felt.

I never worked 8-hour days. It was always a minimum 10-hour day without any overtime or comp time. If my schedule was 9 a.m. to 5 p.m., I wouldn’t finish work ’til 7 and wouldn’t get home ’til 8. The time I felt most stressed was when I was asked to help out on a case that started at 5 p.m. and didn’t finish until after 2 in the morning. I had to help a teenager pack up and move out of her foster home because the foster mother didn’t want her there anymore. Then I still had to come in the next day for an early morning meeting. It was all too much.

My child began to tell me that my job took too many hours away from me being with him. About the time I arrived home it was time for him to be in bed or he was already asleep.

Not Set Up for Success

It was also painful for me when parents lacked the resources to care for their children. Once I was trying to assist a parent in reclaiming her teenage children. I could see this mom wanted to be there for them. Still, mom would always say she couldn’t attend supervised visits because she was trying to maintain a job to survive, and visits conflicted with her work schedule. I felt poverty was tearing apart the family.

Another mother I worked with had three children, and two of them had different diagnoses. Having two children with special needs was very overwhelming to this mom, and I never felt that she got enough support from the child welfare system or from her children’s school. Sometimes I felt like she was being set up for failure.

Despite the difficulties of the job, the human connection made it worthwhile. When families were open to working with me, when they told me “thank you for your work” and expressed that they liked that I was their worker because I was a support, I felt like I had made their lives better. That, in turn, made me feel like my work wasn’t done in vain.

But having so many cases made investing in those relationships harder.

Each case had what seemed like a never-ending list of duties. These included meeting court orders, conducting foster home visits, meeting parents at home, assisting parents to find services, assisting youth in any way they needed, monitoring visits, attending court, and on and on.

Sometimes parents really wanted to talk. I wanted to give them my time, so I could show them that the system wasn’t just against them, but could also be there for them. But at times I had so much pressure on me that it could be hard to really be present. I’d be listening, but I’d also be thinking about all the other tasks I had to complete. I felt that when it came to my own evaluation, what really mattered would be documentation not human connection. Like everyone else I worked with, I saw case planners terminated, often because of untimely entering of progress notes.

That’s because paperwork is the legal protection for the agency. If agencies don’t have documentation that case planners have done the job the way they’re supposed to and something goes very wrong, there can be serious consequences. Supervisors and agencies themselves are under intense pressure.

Still, working with that sense of threat always over my head made me feel expendable and stressed. Because of the overwhelming pressure, I often felt physically ill and down. I would experience intense pressure in my head and the back and sides of my neck. I sometimes thought I might have an aneurism.

Fellow case planners would vent and talk about how overwhelming the job was, and we would also try to assist one another with cases. But providing assistance was challenging because we all had the same stress.

After 9 months as a case planner, I found a different position at my agency. Now I have fewer tasks for each case. The biggest difference is that I don’t have to go to court. That makes it easier for me to be available to families if they want or need something from me. I feel more successful in helping families feel like the system is not fully against them. That also helps me feel more satisfied with my job.

Recently I ran into a mother in the community who had been able to bring her daughter home, and she gave me a hug. She told me that her child was doing well and she was happy, and it seemed clear from her smile and her warmth that she was genuinely happy to see me. It made me feel good about the work I do.

Not every case planner can simply move to a different role. Many just leave the field. I believe child welfare systems need to understand how important it is for case planners to have manageable caseloads. When case planners and parents have time to build a relationship and time for trust to grow, parents are more likely to stop fighting the system and start working together with it to bring their children home.