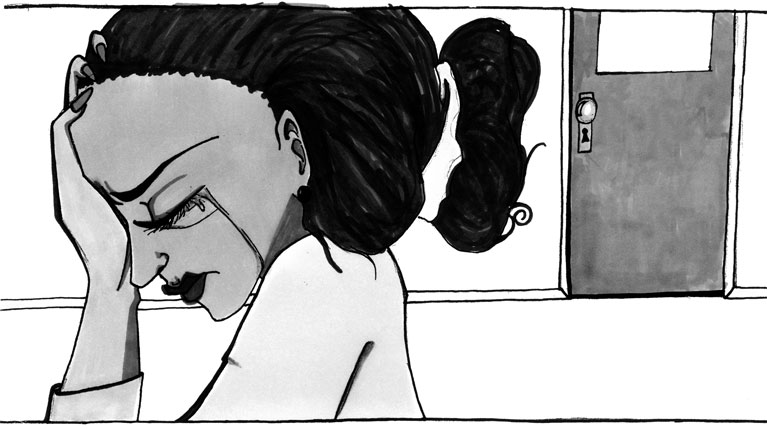 Three years ago I lost my son to foster care because I got too exhausted and overwhelmed to care for him.

My son, who is now 13, was diagnosed with bipolar disorder and ADHD and was in and out of the hospital more than a dozen times in five years. I was a single parent with little support from my family. The pressure of caring for my son took a toll on me.

My son was in preschool when he began showing very strong negative behaviors. If I told him “no,” he would throw things, break things, scream at me, and get so mad he would run out of the house. I tried to deal with my son’s behavior by punishing him, taking the PlayStation away and even spanking him on his bottom. Nothing worked.

It became hard to take my son anywhere or find childcare for him. He was kicked out of several daycare centers because of his behavior. I had to stay in the house with him a lot. I gained a lot of weight. I felt so depressed and cried often. At times I was unable to work due to exhaustion. I lost jobs and found it very hard to maintain a normal life. Even going to church was a struggle.

My son was hospitalized for the first time at 5 years old. One day at an after-school daycare for children with emotional or physical challenges, he attacked a girl and had to be restrained. At the hospital, the doctors told me he had ADHD and bipolar disorder. They gave me information to read and the descriptions sounded just like him.

I used all of the resources I could find to stabilize my son. Through the Virginia Department of Social Services, we had case management, mentoring and in-home counseling.

Those services helped, but not enough. I felt I needed someone capable of keeping him for a weekend, just so I could rest. I looked for respite services, but the only one I could find was to help foster parents. I also learned about a therapeutic summer program and enrolled my son, but his behaviors got to be too much for them and they put him out.

As my son went from hospital to hospital, I felt alone, sad and overwhelmed. People would criticize me when they saw my son’s behavior. They would say, “He needs a spanking,” or, “Let him come home with me for a while. Then he wouldn’t act like that.”

Most people didn’t seem to care or understand that his actions reflected his mental illness. They thought I was just making an excuse when I told them his diagnosis. My family also treated my son’s problems as taboo. My family is not close knit and does not talk about family issues. I felt that no one could relate to what I was going through.

Until my son was 8 or 9, my mom was my main support. But my mom is an elderly lady, now in her late 70s, and as she and my son both got older, she could not handle the physical tasks of dealing with him. Finally, she had to stop caring for him.

In the winter of 2006, I began to feel very stressed out. I often put myself on the back burner to take care of my son, and I was getting run down.

I began talking with our caseworker about options for my son’s care that would give me a break and help him do better. We discussed placing my son temporarily in therapeutic foster care with a family trained to respond to his needs.

I thought it was a good idea for both of us. But before we could get him placed, I became extremely sick. My mind and body just gave out.

One day when I picked my son up from daycare, he was upset because the daycare didn’t have the kind of candy he wanted. He said, “I don’t want this kind of candy.”

“That’s all they have,” I said. He got mad, threw the candy down on the ground, screamed at me and ran outside. I was calling his name and so were the daycare staff but he ignored us and kept running around the building.

I was out of breath and did not feel like I could cope with his behavior. I called my neighbor to come pick up my son so I could go straight to the hospital.

A Place to Rest

In the emergency room, I found out that I had pneumonia and bronchitis. I had a fever of 103 and extremely high blood pressure. I ended up spending the night. It felt good that people were attentive to my needs in the hospital. I felt like I would do or say anything just to have a peaceful place to rest.

While the nurses were checking my vital signs, they asked me, “What is going on in your life?”

I told the staff, “I have a special needs son who is causing me a lot of stress. I feel like I’m going to choke him or seriously harm him if I go back home!” I was just physically and mentally exhausted.

The medical staff felt it was necessary to call child protective services (CPS). The investigator said CPS would provide temporary foster care for my son until they had a chance to review my emotional status.

I Could Not Cope

The next day, when I was released from the hospital, I found out that CPS had not followed through. I felt like I could not cope with my son’s attitudes or behaviors if he came home that day. I was having a hard time breathing and had no energy at all. I felt like I might snap. I immediately began to make calls to find assistance.

One of the agencies I contacted called the police because I made comments similar to those I made to the hospital staff. But as much as I feared I would hurt my son, I didn’t mean that I would—I was calling for help to make sure I wouldn’t.

A Knock on the Door

Soon I heard a knock on the door and there stood the police. They had a mental health crisis evaluator come to my home.

I told the evaluator everything that happened at the hospital and explained that I was just trying to make sure that my son was well cared for because I couldn’t take care of him and had no one to help me. The assessment was that I was under extreme stress and overwhelmed.

The police called CPS. Finally, CPS made arrangements to pick him up from daycare.

I Gave Up Custody

The next day, CPS contacted my son’s father, who lived in Texas, and asked him to come to Virginia to care for our son. My son’s father told CPS that he did not want to be going back and forth with our son. He wanted to take full custody and keep him for the long haul.

I felt I had no choice. No one in Virginia could help me. I also hoped that living with his father would be a positive change for my son. I thought that I would be able to visit my child once I was healed. I could never have imagined that, by placing my son in his father’s care, I would end up losing custody of him forever.

That day we had an emergency hearing and I signed my son over to his father’s custody. Then CPS arranged for my son to stay with me for three days until his father arrived. My mother stayed at our house to watch over us.

During our last three days together, I did not regret my decision. My son was very disrespectful and cursed at me. He didn’t act like he cared that I was sick. It was almost as if my illness triggered his aggression.

My son was also upset when I told him that he was going to stay with his father for a while. He told me, “I don’t want to live with my father,” but I told him, “You have to go until I get better.”

The day his father came to get my son, I walked them to the door, told my son goodbye and gave him a hug. I feared that I would never see him again but I hoped that things would work out great between him and his father and their bond would make him a stronger boy.

But after only a short time in his father’s care, I found out that my son was removed from home. His father had gotten frustrated and hit him, the school reported bruises and our son was placed in residential care.

It’s a long story what happened after that, but in the end, his father gave up his rights. Then, because I didn’t attend court hearings in Texas, I lost my rights and all contact with my son.

Now God has given me the strength to fight once again. Last year, I moved to Texas to try to reconnect with my son. My goal is to get the termination overturned, or at least to have contact. I have met my son’s caseworker and gone before the judge to petition for contact. I am also in counseling now and its helped me to better understand my emotional state and my son.

Sometimes I feel so angry at what happened to my son and me. Although I made a verbal threat, I never caused my son bodily harm. I am shocked when I see that people commit serious crimes and get rehabilitated, then come home to have a second chance with their children. Why can’t I get the same treatment?

I also wish I had had more support before my son and I reached a crisis point. I needed respite and in-home care so I wouldn’t have felt so exhausted and overwhelmed. I believe my son would be home with me today if I was given respite care when I asked for it, or was able to place my son in temporary therapeutic foster care when we needed it.

Mostly, though, I feel sad. My son does not know the whole story. I’m afraid that he believes that I don’t want him in my life. I hope that I will have the chance to see and talk to my son. Maybe one day I can explain to him that I did not have control over the situation and I did not expect our separation to last forever.