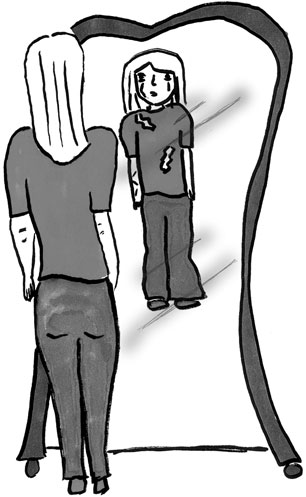 When I met Rene, I don’t know what I saw in him because physically he wasn’t too handsome. I think it was his character, his aggressiveness, which later on was what made me leave.

I met Rene at work and got close to him by asking him to help me. He started saying to me, “You owe me a lot.” “I’ll pay you back,” I told him. “But not with money,” he said, laughing. With that, Rene invited me to the movies.

Then we started to go out more. I remember one winter day sitting in the plaza between the Twin Towers. It was pretty out and we were sitting quietly, looking at the big Christmas tree and watching people walking from one side of the plaza to the other.

Rene was very on point. He always gave me Godiva chocolates and roses and sent me cute notes with precious messages written on a napkin.

At the time, I was very much alone. Even though I was only 18, I had been working for two years in New York City, thousands of miles from my family in Mexico. I’d had to postpone my biggest dream—to continue with school to study psychology—because my mother asked me to come here to work and send money to build our home.

I knew that my mother needed me. After my father died, my mother was alone and had suffered. So I armed myself with a lot of courage and came.

After so much solitude, I took refuge in Rene and soon moved in with him. We worked together and went everywhere together, having as much fun as we could. Now I have learned a little to not confuse my solitude with love.

Rene arrived at 3 a.m., drunk, almost falling over. I was filled with even more anger. “I don’t want you to think I am a cowed woman, submitting to whatever the man wants,” I said.

We started to fight more and he called me “Pendeja.” Then I gave him a slap. To my great surprise, I felt one hit my own cheek forcefully. “Stupid, nobody touches me!” he said.

My greatest force came over me and I started to hit him even harder, but when I stopped, I felt a terrible fear. I thought he was going to hit me back with all of his force too.

But he didn’t do it. In his drunken exhaustion he only managed to say: “Get out of my house. I don’t to see you here when I wake up, because you don’t know what I’m capable of.”

‘Forgive Me, I Love You’

That night, I was afraid for my life. I filled two laundry bags with all of my clothes and called a friend.

The following morning I was determined to continue my life without Rene, but that same afternoon he came looking for me. “Forgive me,” he said, “It’ll never happen again. I was drunk. I swear to you. Forgive me. I love you.”

Two months later I found out I was pregnant.

I’m not going to pretend that we didn’t consider not having the baby. But I told myself, “Don’t think about yourself but about the baby.”

Even so, during my pregnancy, I felt more alone than ever. Rene and I fought many times. There were occasions when I tried to run out of there. But Rene would push me roughly onto the sofa and say, “You don’t get to go when you want to.” Or, “I’d let you leave right now if you weren’t carrying my son. You don’t matter to me.”

I felt powerless. Where was I going to go? I had no family or even someone to confide in.

The final moment came after I had thought about it and meditated on it and weighed all of my options. That day we weren’t angry.

It was a Sunday morning and we were watching the tele. I said, “Rene, I need to talk with you. This is not a hasty decision. I’ve come to the conclusion that the best thing is for us is to separate. We can’t keep hurting each other. It’s not sane. It’s not what I want for me, and it’s not how I want my future.”

“But I love you, I care about you,” Rene said. “I know I’ve made mistakes but I want to form a family. Please, I want to marry you.”

I Had to Leave

Despite his words, I had to leave. I’d seen my own mother suffering. I saw the fights, maltreatment, machismo. No. I grew up believing in my power to achieve something beautiful for my life. What I was living was deceptive and sad. So I left.

There were people who asked, “But why did you leave your baby’s father? He’s a good person. You could find someone worse.” I told them, “I am not going to go through life conforming myself to a bad situation because I don’t believe in myself.”

Others told me, “Stay for the good of your child,” but I said, “I am doing it for the good of my child. If your mother is happy, she brings you happiness and love. If you mother is bitter and lonely, she will bring you sadness and frustration.”

There hasn’t been anything easy about living on my own with my son. Despite the obstacles, my happiness and enthusiasm have returned with more force.

I can also say that, since our son, Dylan, was born, I have seen Rene’s good come out again. Dylan spends two days a week with his father. My son enjoys their time together. Rene, equal to me, has matured.

I’m proud of my decision to make a life with my child on my own. Even though Rene and I are separate, we’re happier, which is better than together and fighting.