On my first day in family court after my son was placed in foster care, I walked up to my court-appointed attorney, introduced myself and 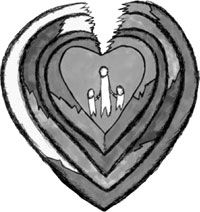 asked, “How can you help me?” He just stared me up and down. In court, he said nothing on my behalf. I was furious.

That day, I saw a woman zipping around the waiting area, talking to other women. She seemed to really care, so I asked her, “Are you a lawyer?” She said, “I’m a social worker,” and breezed away.

For a month after that court date, I did not begin any services, did not visit my son or go to court, and fell deeper into my crack addiction. I felt hopeless and trusted no one.

My mother had called in the neglect report because I was neglecting my beautiful 8-month-old baby boy. I was taking advantage of my mother’s kindness by leaving my son with her for days at a time.

One day, when I returned from running in the street, my son was gone. I knew immediately that he was in foster care. My mom told me, “What I did was necessary.”

I was devastated. I felt my son was my only reason to breathe.

A Glimmer of Hope

A friend convinced me to visit my son and stop feeling sorry for myself. After I saw my son, I went to the next court date.

This time, instead of the lawyer who had first represented me, I found a whole team from the Center for Family Representation (CFR) had been assigned to represent me: a litigation specialist, staff attorney, social worker and parent advocate. The social worker, Adjara, was the woman I had seen zipping around!

My team spoke to me with respect. That gave me hope.

But I was not ready to be clean, and I was honest about that. The CFR team was straightforward, too. They told me that if I didn’t get myself together, they would not be able to help me.

Monique didn’t judge or disrespect me. She pushed me in a good way. I knew she was right. So I promised to enter treatment, and Monique made a date to escort me to the program.

The day of our appointment, though, I stood Monique up. I went to the treatment program on my own. I was so overwhelmed by her genuine concern that it made me afraid.

In the program, I found I had a bigger problem than drugs. Even once I got clean, I was in pain and full of distrust because of past abuse, so my behavior was bad. Every time I went to court, the report from my treatment facility was negative. I felt ashamed that my personal information was being shared in court and feared I would not get my son back.

But my CFR team jumped on my strong points. They told the judge that my drug tests were clean and I did not miss visits. I also got certificates for completing a number of programs.

I was surprised that my CFR team continued to speak to me with respect even after hearing the bad things about me in court. It’s hard to talk to someone in a positive way about her negative behavior, but my team didn’t talk down to me. They were careful with their words and stayed positive.

Soon I got visits supervised by my mother, but I hit more bumps in my case. First, the treatment program asked me to leave because of my behavior. Immediately, the agency dropped my visits back to once a week, supervised at the agency, even though the court order stipulated that, as long as I was still testing clean, my mother could supervise my visits. I called my lawyer, she reminded the Children’s Services lawyer about the court order and my visits at my mother’s house were reinstated the next day.

On my own, I got into outpatient treatment and started therapy and anger management. A year and a half after my son went into foster care, he came home on trial discharge.

During the trial discharge, I got a new case called in on me because my boyfriend attacked me on the street after I broke up with him. I called Monique right away and she told me, “Don’t let anyone in until I get there.” Monique was right there when the child protective worker arrived, and she helped me prove to the investigating caseworker that my son was safe, despite this man’s actions. The case was closed, unfounded.

Looking back, I don’t think I showed how much CFR’s help meant to me. Every time my team saw me, I was pushy and had an attitude about something that was going wrong. But I called CFR every time I ran into trouble.

Now everyone from CFR looks at me with pride. When I got my son on trial discharge, I needed a stroller. Monique called to say, “Come and get it.” I was so grateful.

Soon after, Monique came to visit me at home—the apartment she found for me. “I couldn’t wait to see you with your son at home!” she told me, and I gave her a big hug.