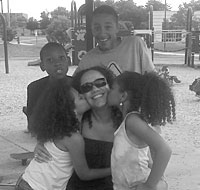 we found each other three years ago. Angel and I were soul mates. Bringing our four children together was another story. I never, ever could have imagined what it would take to blend our families.

By the time Angel and I decided to unite our families, we had all visited one another many times and the kids enjoyed one another’s company. Still, our children were 4, 6, 8 and 10. Angel and I knew that combining our families was going to be hard. We’d have to get used to new roles, new rules, new siblings, new routines, and my kids were making a big change from the city to suburban Pennsylvania.

Plus, we were all going to live in a one-bedroom apartment. The kids would share the room and Angel and I would sleep in the living room while we saved to purchase a larger place.

Moving day was warm and busy. Everyone was excited and helping out. The first few weeks were like a major sleepover for the children. But as the summer went on, our family life became difficult. The biggest trouble came from Angel’s 6-year-old, Alicia, who was bossy and angry. Alicia pushed and snatched toys from our other kids. If I confronted her, she’d say, “I didn’t do anything!” I had never experienced a child having the courage to yell at an adult.

Over time, she got more and more aggressive—hitting, biting, lying and stealing. When Alicia would have her outbursts, my son, Alex, would get very upset and my daughter, Juliyanna, would get scared. My children had never seen another child so unhappy.

No Order, No Consequences

At first, I thought that Alicia was acting out because of all the new changes in our family. But I also noticed that there was no type of order. Angel would yell or ignore bad behavior but he didn’t respond in an effective way. Angel’s children basically were raising themselves.

One of our first weekend mornings, I got up to make breakfast. My two children know to wait for Mommy’s huge Saturday breakfast but I found Alicia and Cameron pouring cereal. Watching them make their own breakfasts at such young ages had me concerned.

I also found out that Angel’s ex-wife wasn’t the mother I’d thought the children had. Angel had said that his wife had their children on weekends and some days of the week. But that summer, it seemed like Angel’s ex-wife just handed her kids over to me. When it was convenient for her, she wanted her children, but like many fathers, she played an in-and-out role. I was shocked.

Alicia especially adored her mother and wanted her mother every minute of every day. But when Angel helped Alicia call her mother, she usually wouldn’t answer or return the call. Weekends passed when she didn’t come to pick up the children. Alicia would cry and scream, “I want my mom.”

Laying Down the Law

As time passed, I started to wonder, “Is this where I belong?” I felt concerned that I had walked into a mess of problems and I was overwhelmed. But I didn’t want to go backwards so I shared my concerns with Angel. I told Angel that kids need predictable rules, a schedule and consequences. At first we bumped heads. For a while I had to deal with: “No one is perfect in parenting like you,” or “What’s wrong now?” But I’m proud that over time we came to solutions together.

Finally, with Angel’s support, I decided to lay down the law. It was time for Angel’s kids to know who was in charge and give them all their share of responsibilities. I placed a chart up in the house that gave each child a job to do. I wanted to start showing them responsibilities and keep them busy and out of trouble. I also put the whole family on a schedule. My biggest point was to show them how life works—we all have jobs and we have to do them on time.

The system went well, except with Alicia. Alicia hated everything: “I’m not doing these chores—you do them! I don’t want to do this. I want my mom!” When I told Alicia to get to work, she would stand right in front of me and give me a look like she wanted to hurt me and I was supposed to be scared. It was hard at first, but when I stuck to my rules over and over again, she realized she was not going to win this battle. It also helped that the other children took to our new system so well.

Angel and I also decided to seek help for Alicia because her behaviors were becoming a safety issue. In therapy, her therapist explained it this way: “Alicia is holding on to a dream of being with her mother. Now that you are in her life and she sees how another mother acts with her children, it makes her wonder way more about her own mother.” The therapist supported us in seeing that Alicia was acting out because she needed someone to understand and help her.

Date Night with Mom and Dad

After we started getting help for Alicia, I realized that Angel and I were so focused on helping Alicia that we had kind of missed out on the other children. Angel and I started thinking of ideas for giving them each attention, like going out for dessert one-on-one with one of us, or taking a car ride to talk. We called it date night with Mommy or Dad.

We also focused on family time, like movie time with all of us together or board games. One of our family’s favorites at dinner is “high and low.” We go around the table and everyone gets to share the high point of the their day and the low point. Cameron says things like, “My high point today is that we have no school tomorrow and my low point is I have to eat my vegetables if I want dessert!” Little games like that are so important to me. The games get them to talk and laugh.

Now I can finally say I have things under control. We are far from being a perfect family, but our struggles are manageable. I have learned to read Angel’s children and find out what works for them. Knowing the children better also helps me enforce the rules, with positive times and with consequences. It took some time but now all of the children know how our family system works.

The children also have gotten more used to each other. There are days when they want to be around each other and days when they don’t. Alex and Alicia, both children with ADHD tendencies, do not really interact. They only speak to each other for a very short time before the arguing starts. Alicia and Juliyanna can play with parent supervision. Though they fight for my attention, they are also my shopping buddies and my helpers, my cup-of-tea-time girls. Luckily, Cameron and Juliyanna are like paper and glue. They love spending time together. They laugh so much while drawing and playing cards.

A big change came when Alicia started calling me mom a year ago. Juliyanna was not too happy: “Why is she calling you mom? You’re my mom! She has a mom!”

I spoke to Juliyanna privately and explained: “Because her mom is not involved in her daily life, Alicia looks to me to be another mom.” At first, Juliyanna did not want to take that as an answer, so I told her, “Juliyanna, you are so lucky, because you have a good mom, and that is why Alicia calls me mom, too.” That brought a smile to her face.

A few years ago I wanted to run away. I didn’t think I had it in me to mother four children or to deal with so much anger and rejection. I felt like I was losing my mind. Now, I’m stronger. I have it in me to mother all of my children, no matter what the ups and downs may be.

Angel has also changed since we came together. Angel had his share of abandonment as a child. I feel proud to know that, each day, Angel is breaking the cycle of fatherless children in his family. To see him trying to get this father role right gives me strength.

My children are still learning to accept him as their stepfather. Alex, especially, still feels the need to guard me. (His and Juliyanna’s fathers both turned out to be controlling and abusive.) One thing I do with the children is talk about the past—and how much things have changed for the better now that we’ve been blessed to blend our families.

This year will make five years that Angel and I have been together. We are far from a perfect family, but I am confident now that we are raising our children to value family. I hope our children will follow our family traditions when they become parents one day.