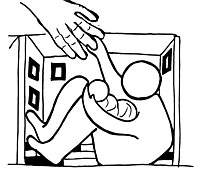 In many places, families who are investigated for child abuse or neglect face an unexpected and unwanted visit from a child protective worker who knocks on the door and announces that she will investigate the family. During the investigation, parents are often focused only on getting child welfare out of their lives—even if they really do need help with practical problems like child care or clothing for their children, or parenting supports that would keep the family from reaching a crisis point.

But some states are trying a less intrusive and more supportive approach. Here, Caren Kaplan, the former director of child protection reform at the American Humane Association, and Tony Loman, director of the Institute of Applied Research, describe “differential response.”

LOMAN: The idea of differential response is that you need more than just one kind of response—an investigation—for all the kinds of cases that come to the attention of child protection. When child protective services went national in the early 1970s, the idea was to respond to severe cases of child abuse. But during the 1970s and 1980s, more and more states began to accept many different kinds of reports, including things like a dirty house, or inadequate clothing or food. These kinds of cases became the dominant part of the child protective system and people began to ask, “Do we really need to do a police-like investigation for all these cases?”

KAPLAN: A good analogy is, if you went through a red light, you wouldn’t want or need a SWAT team as a response. We often give families who come to the attention of child protection a response that is unwarranted given the nature of the situation.

Families who are investigated are left feeling scared and angry. If their situations don’t meet the standard of “imminent danger” to the child, the family usually declines services and the case is closed. But often, the same families are reported to the system again with more problems and more safety issues because the family didn’t get any help.

In a differential response system, anywhere from 50% to 70% of cases called in to the State Central Registry might receive an “assessment” instead of an investigation. With an assessment, there’s no unexpected knock at the door. Instead, the worker calls to set up an appointment with the family. The worker’s job is to partner with families, listen to what families say they need, and help families build their own capacity to protect their children.

LOMAN: An investigation involves the identification of a victim, the identification of a perpetrator, the substantiation of some type of abuse or neglect, and in most states something called a Central Registry that keeps anyone with an indicated case from working with children and from adopting children for many years. All those things go away when you do an assessment. In a family assessment approach, the case isn’t public either, so the only people who know about your case are the people in the agency.

When child welfare systems use the assessment approach, families consistently request help with their basic needs, like emergency food, clothing, help with housing, transportation, day care. What we’ve found is that once you begin to address these kinds of poverty issues, the safety issues are not as likely to come back. I’m not saying that all you have to do is address poverty and all other family problems go away. But addressing poverty makes it easier to deal with the other problems.

KAPLAN: If a family is sleeping in the car and mom has need for psychotropic medication, it’s unfair and unreasonable to expect mom to take her medication and engage in treatment. Differential response workers still have the power to remove a child if they believe that a child is in imminent danger. But for most cases on the assessment track, workers really do approach families more as partners than as adversaries.

From the very beginning, the research has shown that children are no less safe when we use the assessment approach with lower-risk families, and that families don’t cycle back through the system the way they did before.

LOMAN: When we tracked our samples over a long period of time, we found that there was a reduction of new reports, and there was also a reduction of children removed. The size of it tended not to be enormous—something like a two to four percent reduction in reports and a two to four percent reduction in children removed. But if we extended that to the hundreds of thousands of families nationally who come to the attention of child protection, we’re really talking about thousands of children.

What is less modest—what is really striking—was the greater proportion of families who were satisfied with their encounter with the worker. Traditional investigations tend to be very dictatorial: “Here’s the plan. We want you to sign it.” Under a family assessment approach, families reported less fear and anger, and families tended to feel that they had more of an ability to participate in decision-making.

KAPLAN: I think that when parents initially experience an assessment, they’re not too thrilled. Who is thrilled about child protection showing up? But when we got feedback from parents who had experienced the assessment approach, they talked about the fact that they were listened to for first the time in their lives. Many continued to have contact with the worker after the case was closed. Several of the families had experienced both types of interventions, and they said there was there was really no comparison.