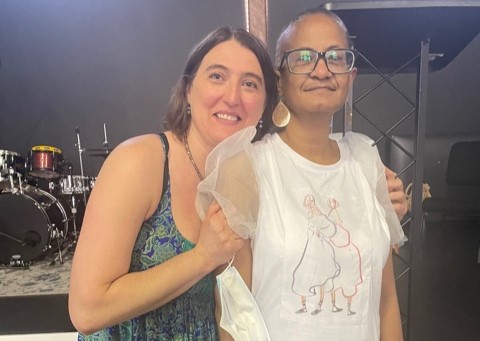 During a community-building workshop early on in the Rise & Shine Parent Leadership Program, we did a group activity where we spun around in circles until we were informed to stop. We were told that when we stopped, the person we were facing would be our buddy. I am usually guarded, have a wall up and do not prefer activities like these—but I was hoping for the best.

Getting to Know My Buddy

My buddy is Giada and we instantly connected. She is a single parent impacted by the family policing system. Our sons attended the same school. I learned that she has one son and a wonderful cat. She likes writing and has specialty talents related to dance and music. Both Giada and I have different accessibility needs, which was awesome to discover.

As we progressed through our time in Rise & Shine, the buddy pairs did activities together, including one where we interviewed each other using a worksheet. We also did a team-building exercise where we were given materials (marshmallows, spaghetti, string, etc.) that we used to build something together. Each Rise & Shine buddy group created a name for themselves and also an imaginary book title. Giada and I produced “KimGia” for our buddy team name—both of our names combined. The name we came up with for our book is Harlem Rising.

Everyone’s buddy was a good match and each pair bonded, supported each other through thick and thin, called their buddy to make sure they were okay if they couldn’t make it to the program and provided peer support with their writing.

I’ve done some research about the buddy system and peer support. According to the StaySafe website, the term ‘buddy system’ originated in the military and buddy systems have been widely used in settings as diverse as heavy industry and education. The principle is that two people are paired to support and look out for each other.

The Wikipedia definition, which I like better, explains that “the buddy system is a procedure in which two individuals, ‘the buddies’, operate together as a single unit so that they can monitor and help each other.” Wikipedia states that, according to Merriam-Webster, the term ‘buddy system’ dates back to 1942.

Rise learned about the buddy system originally from The Audre Lorde Project—a lesbian, gay, bisexual, Two Spirit, trans and gender non-conforming people of color organizing center in New York City. (Audre Lorde, who lived from 1934 to 1992, was a Black feminist, lesbian, poet, mother, warrior, Native New Yorker and daughter of immigrants.) At Rise, the purpose of the buddy system was to have a support system and know you are not alone. It grew to be even more than that for me.

Giada and I created a bond and provided support to each other through good times as well as challenging times, which was unbelievably valuable. At one point, I was contemplating dropping out of the Rise & Shine Program. She provided me with tough love and stated that I should stick it through. I was also there for Giada as we processed our experiences in the program. Having a buddy like Giada, who is trustworthy, non-judgmental, patient, empathetic (not sympathetic) and compassionate made a huge difference in my participation in Rise & Shine to the end.

On a personal note, Giada has become a great friend to hang out with. Recently, we went to a show at the Apollo together and I attended her organization’s fundraiser gala. Giada has provided both personal and professional support. She is collaborating with me and sponsoring my non-profit organization, Lady Survivor, Inc., to move it forward.

Having Giada as a buddy has been rewarding for me—because everyone needs a good buddy! I really appreciate this aspect of the Rise & Shine Leadership Program.

Getting Through This Together

In addition to sharing in peer support with my buddy at Rise, I am working to create opportunities for parent peer support through my organization, Lady Survivor.

I started Lady Survivor as an alternative to the punitive family policing system, to keep families from being separated and provide direct support services to families experiencing crises. Our mission is to prevent Black and brown children from being separated from their families by ACS and placed in the foster system due to poverty and lack of resources. I don’t want other people to go through what I experienced because I did not have any traditional support systems. ACS separated my children from me because I was in crisis and didn’t have child care.

Lady Survivor’s tagline or slogan is, “We will get through this together.” Lady Survivor will create a culture and model of peer support, with people with lived experience working in collaboration with social workers. We believe this model will benefit parents because a well-trained peer service worker will be able to understand the parent, meet them where they are at in their journey and provide critical support. The peer service model will be more cost effective and have a greater positive impact in the long term than ACS.

Peer support and the concept of the buddy system could be used in a lot of different settings (for example, in the shelter system, jobs, schools and churches and in the community) to provide parents support with navigating challenges and emotions and to share resources. Peer support approaches can prevent families from deteriorating and support single parent heads of household in thriving—not just surviving—and not being dependent on systems. If we want to strengthen families, we should shift our mindset and practices from being punitive to a more humane, compassionate, peer-related model.