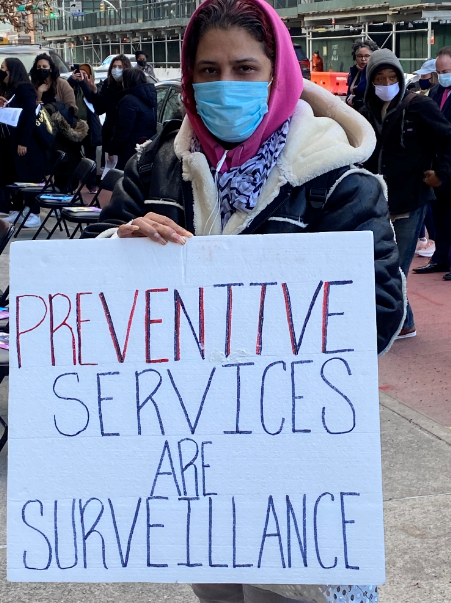 “Some cops are caseworkers”

>> Below, read reflections about the rally from Halimah Washington and Jeanette Vega of Rise.

>> Read more about the rally in The Imprint: Pressure Builds to Reduce Racial Disproportionality in NYC’s Child Welfare System

‘I believe in the leadership of impacted people’

“I attended the F**k ACS rally because I believe in the leadership of impacted people — impacted parents especially. The rally was organized and funded by Joyce McMillan (JMACforFamilies), parent advocate and impacted parent. What I loved about the rally is that it elevated the voices of directly impacted parents without policing their language or expressions of anger and disgust with how they were treated by the family regulation system. The F**k ACS  rally wasn’t calling for reforms in the system. Instead, it was calling for the whole system to be dismantled and abolished. The rally included parents, lawyers and NY State Assemblywoman Latrice Walker. Speakers included impacted parents, NY City Council member Alicka Ampry Samuel and Andrea Richie, author, lawyer and activist for women of color — all calling for reimagining family support and abolishing the family regulation (child welfare) system as we know it. The biggest takeaway for me was trusting and investing in the leadership capacity of  directly impacted people (parents). I was honored to be a part of such a revolutionary event. Nothing about us without us.”

“Being at the rally was powerful — seeing other parents, advocates, attorneys, all fighting for families’ rights and bringing awareness to the harm ACS does to families and communities. Abolish a system that families say they don’t want.”