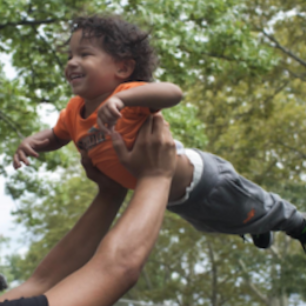 When my children were in foster care, it was hard for them to be children. They were 4, 9, 11 and 12 years old, but they were forced to be in adult business.

Every Thursday when they came out of school, I saw my children for three hours. I was on time all the time. I brought them toys, clothes and food that they liked so they knew that I didn’t forget about them.

Luckily there was one other place where my children were allowed to be children, and that was at a youth center in the Bronx. The foster mother took them, and it helped them not focus on being in care and not seeing me every day. They did activities like football, basketball, dance.

My kids told me about all the fun they had. When my daughter asked me to come to a show she was in, I was impressed. I said to myself, “This is a place for my children to be at.”

My kids’ time in care felt like years though it was really just one year. Even when they came back home, it was still hard for my kids to be kids.

Every time someone was at the door, they would think ACS was coming for them.

It took about a year for them to stop worrying.

The other difficult part was that we moved to Brooklyn where they didn’t know anyone. It helped that they could still go to the community center.

A PLACE TO FEEL GOOD

My sons like to play basketball so the center put them on a team to show their talent and skills. My daughters like to dance and model, so they put them on a dance team and in a fashion show every year.

When my daughters dressed up and walked down the runway they felt good to have people watch them and clap for them. But when my sons played games, they didn’t care if people were watching — when I was there to watch, that’s all that mattered to them.

The center was almost two hours each way, but it was worth it. Eventually we moved back up to the Bronx, just a few minutes from the center, so they could be there all the time.

I also got involved at the center as a volunteer. A few years ago the center asked me and some other parents to join the fashion show. We had to dress up with our girls like twins. We went shopping and bought the same sneakers, the same shirts that said “Love” on them in red and pink, and the same blue jeans.

Everything was going smoothly until I realized, 20 minutes before show time that I’d left my shirt at home. I laughed and the kids laughed at me as well. Then one of my children ran home to get my shirt. After that, I realized that I had brought mismatched socks! I had no choice but to wear mismatched socks on the runway, but everyone laughed and seemed to love it.

During the show, kids danced, sang, rapped. The lights were low and the audience was filled with parents who clapped for everyone.  Seeing the happy looks on my daughters’ faces as they walked the runway made their time in foster care feel very far away.

The community center let my kids be kids and stay out of the street. My children are big now and don’t have to worry about ACS. But they still go to the center. It has been seven years.

In addition to being a place for children, the community center helps families because they know what families need from day to day. If families need food and clothing, they have a food drive and a clothing drive. They feed families, give them a hot meal. On holidays, they give out turkeys so families will have Thanksgiving and Christmas meals, and make sure kids will have gifts under the tree.

Families need more places like the center. For families under stress, organizations like the center can be a place to feel joy and togetherness and to share resources. If more of our community was like this, there would be fewer investigations and less surveillance in the Black and brown community and less involvement with child welfare systems.