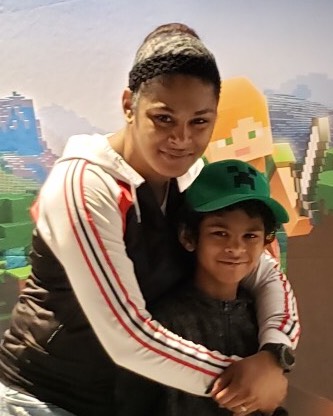 Sarah and her older son

As a child I cried out for help to child protective services. But the system didn’t help me when I was a child, and it hasn’t helped me as a parent.

Almost as soon as my older son was born, child protective services came into my life saying my son needed protection from me, and it has remained in my life to this day. Instead of helping me, it weakened my family and left me vulnerable. Because of the system, my child lives with anger and anxiety.

When I was a teenager, I called ACS because I was tired of fighting my mother’s husband, who forcibly touched me and tried to have sex with me, and I was fed up with my mother accusing me of just wanting attention and lying.

No Support, No Protection

After the investigation, my mother shipped me off to Pakistan.  I lived there for a year with my mother’s husband’s family. The values were so different. Families sat together for meals, children respected their elders. Some of it was nice.

But there were times when they hit me. And they wanted me to marry for my papers. I had no privacy to talk to my mother about what was going on. Again, I felt alone, abandoned and unprotected.

Eventually I made a friend who called the U.S. embassy. They sent a car for me and my escape began. But even after I escaped Pakistan, my mother would not do her duty. She said she could not protect me from her husband if I came home.

I ended up on the streets and in the shelter system.

No Time to Get Away

That’s where I met my oldest son’s father. When the mental and physical abuse started, I thought abuse was the way to show love because I never had a role model of how a man should treat a woman. That is something that has haunted me until recently.

I never for a second thought he would abuse our son. But he did.

One day Adam started fussing, and his father bit him on the back three times. He said he was playing, but the bites were serious. Years later, Adam still has bruises from them.

Adam cried while his father acted nonchalant. I was upset and scared. I knew I needed to get away to keep Adam safe. But I didn’t have a chance to figure out how.

I Lied from Fear

Adam was a fussy infant, and the shelter isn’t easy for anyone. Nosey people had already called ACS on me two or three times when they heard him crying at night. ACS would barge in with their opinions already formed.

Shortly after the biting incident, someone called again.Of course when they came, they did a body check and found the bruises. I lied and said I got Adam’s skin caught in his stroller.

I lied because I was scared that ACS would remove Adam and that Adam’s father would come after me. I didn’t trust ACS because they didn’t protect me as a child. Lying was the only way I knew to protect my son.

I could have used some coaching to understand how to be safe and tell the truth. Instead, ACS thought that I bit my son and they removed him. Adam went into care at a few months old and came home at 2.

Now, years later, I continue to live in constant fear of ACS. I also live with a child who has been scarred by his time in foster care.

Adam came home in December 2012. Shortly after, he was diagnosed with ADHD and ODD. He also had separation anxiety. I don’t believe he would have had those issues if he hadn’t spent time in foster care.

Two years later I clashed with his school because I wanted Adam to get services for ADHD but stay in his general education class. His school wanted him in a class with all special-ed kids. When I fought them, the school called in a report and the investigator tried to pin educational neglect on me. ACS took Adam and placed him in foster care for two weeks.

In court, the judge said my son should go to class for children with special needs, but he also told ACS to send Adam home.

My Past Is a Problem

And my nightmare with ACS never seems to end. Recently his school called a case on me because I had Adam on the wrong ADHD medicine.

We had moved and I hadn’t found Adam a new clinic, and the emergency room would not give me another refill. I had an old prescription and decided to give that to him. I was sure that if I didn’t have him on any medicine the school would call me to take him home. Instead, because of the medicine, he fell asleep in school and his blood pressure dropped. The school called ACS.

In the child safety conference, ACS wanted to remove Adam again from my care. I was upset. I was trying my hardest to get Adam his meds. I gave ACS the numbers to the emergency room, the pharmacy and the insurance company so they could find out for themselves what happened. But they wanted to take Adam because of my past history. They said it directly: “Your history is a problem.”

I was lucky this time. I had a paper trail to prove why Adam was on the wrong medicine, and what I was trying to do to fix the situation. Without that, he could have been gone all over again.

The Damage Is Done

The system allowed me to get molested. Then they took my son. And no matter how hard I try, I can’t get the system out of my life.

It was so hard for me when Adam was in foster care as a baby. I saw him only twice a week for two hours. I felt alone in my pain and, for a while, I spiraled out of control drinking and smoking. The foster mother was good to him from what I saw, but I hated watching him go home with her. I hated not being with him. I hated when he called her Mommy.

Now, in a lot of ways Adam is a happy kid. He loves to play, play, play. He is also very affectionate. He runs up on me a million times a day with his sweet, “I love you, Mommy.”

But when he feels like he’s losing my attention to his younger brother, he’ll refuse to listen and be very mean to his brother. His separation anxiety also got so much worse after his second foster care placement. He needs a lot of reassurance that I love him and that I’m not going anywhere.

Sometimes I need reassurance myself.

I have bad nightmares about losing Adam or something terrible happening to him. Most times my dreams are a combination of everything bad that I’ve lived through.

ACS has caused my family immense suffering. ACS refused to help me at any and every point in my life that I needed help. If ACS had helped me when I needed help, a lot of my life could have been different. My son Adam might even be a happy-go-lucky kid.