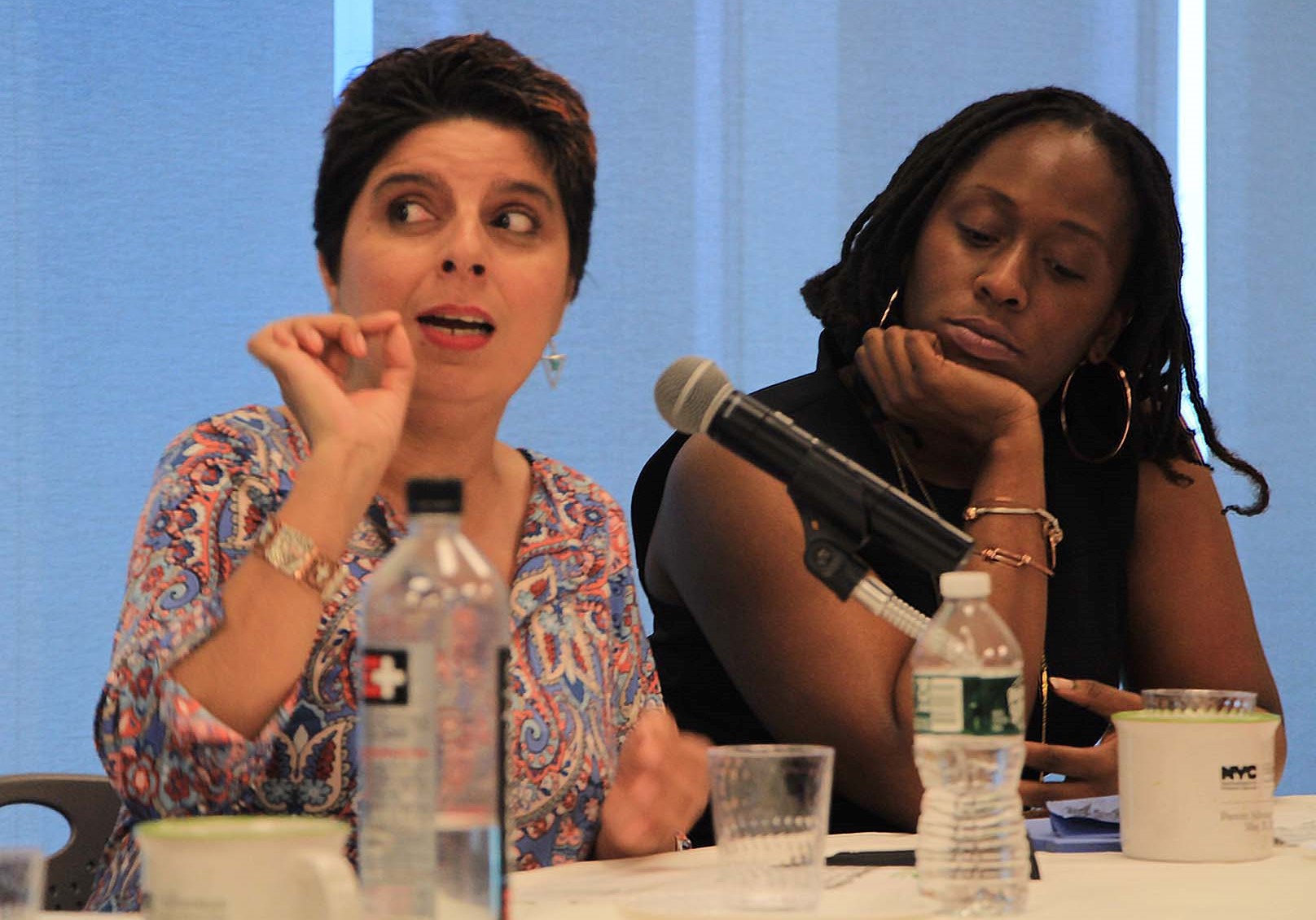 Reported by Keyna Franklin and written by Aleesa Mann

Jovonna Frieson is a parent advocate at New Alternatives for Children. The only one. It’s a job she considers an honor but also a stressor given that the agency works with hundreds of families annually while Frieson can only support about a dozen parents at a time.

“There’s not one parent that wouldn’t love to sit down with me and chat and be empowered, but that’s not possible,” said Frieson, who relates to parents because her own son spent time in foster care. “There’s only one of me.”

Despite growing evidence that parent advocates are uniquely capable of engaging families, many advocates working in NYC’s child welfare system are like Frieson—parents who work alone within agencies, serving a small minority of the hundreds of families who could benefit from their support.

Advocates hope this will change when NYC’s child welfare agency, ACS, issues new foster care contracts, which could potentially require agencies to hire more advocates. In January, the agency released a study of its Parent Advocacy Initiative showing that parent advocates help reduce foster care placements and bring many other benefits to families because of their life experience facing the system.

Advocates in ACS’ initiative have a very limited interaction with parents—they join parents in conferences where the decision is made whether to remove a child—yet their impact is clear, according to the study done by Marina Lalayants at Hunter College’s Silberman School of Social Work. Between 2013 and 2016, the agency saw a 10 percent reduction in recommendations for remand or foster care placement, and an increase in the percent of children that remained at home, either under court supervision (to 51.7 percent from 41.2 percent) or without further child welfare involvement (to 19 percent from 17.6 percent).

‘They Don’t Want to Hear Our Voices’

At a forum in May where ACS released the study, Children’s Village CEO Jeremy Kohomban asked parent advocates why they thought these roles haven’t expanded.

“A lot of people are afraid of what we have to offer,” said Robin Lyde, a parent advocate at the Center for Family Representation. “They don’t want to hear our voices in all reality.”

“Some people don’t want our opinions at the table,” agreed Samantha Ruiz, a parent advocate at Vibrant Emotional Health. “They’re like, ‘Why you telling parents that? Why are you offering them that resource?’ My common language was, ‘How are you going to tell me I can’t have a conversation in a way that makes sense to me?’”

Frieson says there can sometimes be a lack of understanding about the ways parent advocates have to delicately balance the rules and regulations of the child welfare system, with the painful histories and traumas of child welfare involved-families.

“It is hard walking into any room, discussing a family and what they’re going through, and knowing that that could have been you or maybe still can be you. That is when it feels like, ‘Wow, do people even know what I’m in here doing?’” she said. “I have to hold both ends of this very, very necessary, but sometimes dangerous system. I have to hold the fact that it works and the fact that it hurts, and I have to find ways to make it hurt less and work better.”

“Hopefully the research will shape the request-for-proposals,” said Mike Arsham, director of the Office of Advocacy at ACS, who oversees the Parent Advocacy Initiative.

If required under new contracts, “the barrier is that it not be seen as an unfunded mandate – that there be explicit support for it in the budget model,” Arsham said. “I certainly think ACS could explicitly support that model.”

“Hiring people with lived experience to work with other people who are in the system—that is totally transferable from the criminal justice context to the welfare context,” Glad said. She suggests that the funding model could be too.

In the justice system, the movement started with both the Mayor’s Office for Criminal Justice and the Department of Probation putting out requests-for-proposals for programs that actually required hiring credible messengers. “If there is a way to get ACS to build these requirements into their contracts, that is a powerful way to getting it off the ground,” Glad said.

Bottom of the Totem Pole

Most child welfare agency directors who attended the ACS forum already have a long-standing commitment to parent advocates, who they see as providing critical supports for parents and contributing to a culture shift in attitudes toward parents.

Changing the culture is what motivated Lyde to become a parent advocate after facing the system herself. “I thought it was a great opportunity to educate caseworkers, lawyers and judges that you can’t hold the stigma over our heads,” she said.

But Lyde says it can sometimes feel to parent advocates like they are at the bottom of the totem pole when it comes to important actors in the child welfare system.

That was how she felt several years ago when working at a foster care agency with a parent who had received a long prison sentence. The parent wrote to Lyde asking if she could get her a picture of her child, something that would allow her to “do her time in peace.”

“That was her only request,” Lyde said.

Lyde asked her director and after a few days, the director denied the request.

“I felt so powerless and useless,“ Lyde said. “Why couldn’t we do that?”

Jess Dannhauser, CEO of Graham Windham, says the culture of an agency has to be receptive to parent advocates. “You can’t hire parent advocates and ask them to do all the organizational change for you,” Dannhauser warned. “It’s all of our jobs at Graham to build a culture where families are respected, heard and spoken to compassionately and honestly.”

Dannhauser says his agency has been able to hire and retain advocates because it is an organizational priority. Since creating its Family Success Initiative in 2014, Graham has grown from a single parent advocate to four full-time “Family Coaches” who are life-experienced in facing the child welfare system. ACS funding through its contracts would enable the program to grow.

Like ACS, Graham had its advocate program assessed by Lalayants. The resulting study emphasized the many ways that parents related to their advocates because of their personal experience with the system, which allowed them to feel more comfortable asking for help and communicating their needs in service planning.

“Parents developed an instant camaraderie and trust typically absent from relationships with caseworkers,” the report states. “The peer supporter validated the feelings of parents who did not hesitate to speak to the supporter, vent frustrations, and discuss apprehensions.”

The report also makes note of parents’ frustration at the scant number of peer supporters and their suggestions that peer supporters have more responsibilities within the agency.

These suggestions align with the sort of expansion of roles that Lyde hopes to see in the future.

Sometimes that means putting in extra work for the people that foster care agencies may be inclined to give up on, Lyde says. She recalls working with one mother of 11 children. Ten of her children were adopted, but the mother was working to bring her youngest child back home.

“The lawyer at CFR and the social worker felt like we needed someone on her case who can tell her that she can do this even though 10 children had been adopted,” Lyde said.

Lyde entered her relationship with the mother thinking, I’m going to help her walk that mile she needed to walk to bring her baby back home.

“I constantly talked to her and motivated her along with the lawyer and social worker who supported her. It was a process, but she brought that child home,” Lyde said. “It mattered to me that the impact that I made in her life was to let her know not to give up.”

Keyna Franklin is a Rise Parent Leader and Aleesa Mann is a Reporting Fellow who has previously contributed to Politico, Bedford + Bowery, and The Root.