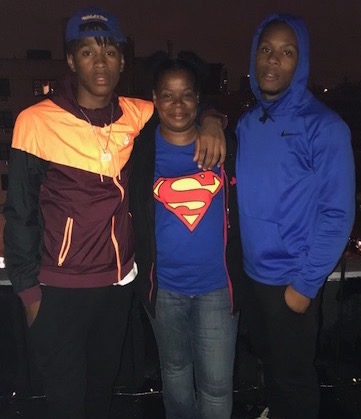 I will never forget the day I returned home from an appointment and saw a note on my door saying that my children had been removed from home. I thought, “Did they take all of my kids?”

When I opened the door none of my six children were inside.

I immediately called the worker and found out that she had taken the two youngest, my 8-year-old son and my 4-year-old daughter because they were home alone.

I was confused. When I left home that afternoon, my family was safe and happy.

My oldest sons, 15 and 10, and my 9-year-old daughter were at school. My oldest daughter, 14, was at home with the little ones because they were o from school.

CASE IN THE MAKING

After I got off the phone, the other kids came home. I asked my daughter what happened, and she said she’d run to Target and didn’t take the kids because it was freezing outside.

I was angry. I told her that she should have taken them.

At the time, I already had an open case with CPS involving her and my oldest son.

When I was 18 and they were 2 and 3, we lived with my mother, who had a drug problem. Their father’s mother had told CPS that my house wasn’t suitable for my kids. I didn’t want to go to court so I agreed to let their father raise them.

I didn’t see my kids again for 11 years.

Then one day, I bumped into them on the street. We reconnected and started visits. Two years later, they ran away from their father and came to live with me.

It was good having all my kids under the same roof and they were happy being with each other. But five months later CPS got involved because my son and daughter were always late to school. They continued to go to school near their father’s house and it was a long commute. The school made a report and I was charged with educational neglect. The worker had come that day to check up on them.

The morning after they took my kids the worker got a court order to remove my other children. She took them later that night. I cried like a baby.

Three days later, the worker told me that I had to do a parenting class and mental health counseling to get my kids back. Mental health had nothing to do with my kids being removed but she felt that I wasn’t showing that I cared that they had been taken.

I told her, “I am here. That should show you that I want my kids back.”

But then she told me that she was there to help me, and that made me feel better. She said she would help me find services, but that it would be good if I could nd them on my own.

I didn’t think I did anything wrong, but I knew I wasn’t going to get my kids back without doing services. I immediately found a therapist and parenting class near where I lived.

I made my schedule to fit me.

I did my services in the mornings and visited the kids after school and on my days o from work. My kids always wanted to know when they were coming home.

For the next several months I worked my service plan. I didn’t get much from the parenting class because the counselor didn’t have the answers to many of the questions the parents had.

I resisted the counseling for the first two weeks because I was never one to share my feelings. I stayed quiet and waited for the time to go by. But then the therapist warned me that if I didn’t talk he wouldn’t be able to report any progress to the worker, they would think something was wrong with me and it would take longer to get my kids back.

I didn’t see what talking had to do with getting my kids back.

He said that if I didn’t talk, CPS would think that my anger was building up, and when I eventually got mad, I would take it out on my kids.

That’s when I opened up about how everyone was telling me that it was my fault that my kids got taken and how I thought my kids were mad at me.

It felt good to let it out.

I finished my services in six months, but my case continued for another year because the CPS worker kept going to court and saying things like I didn’t complete my services or that I didn’t have food in my house for my kids.

Thankfully, I was able to show my certificates in court and photos proved that I had everything my kids needed at home. I felt powerful and in control.

Once the judge saw my progress, I quickly moved to weekend visits, overnights and then my kids came home.

It felt so good to have my family back under the same roof.

After my children came home, I volunteered at the foster care agency to help other parents who were in the same boat that I was in. When they would ask if I did my services and how it was, I would tell them it wasn’t fair, but I did it to get my kids back.