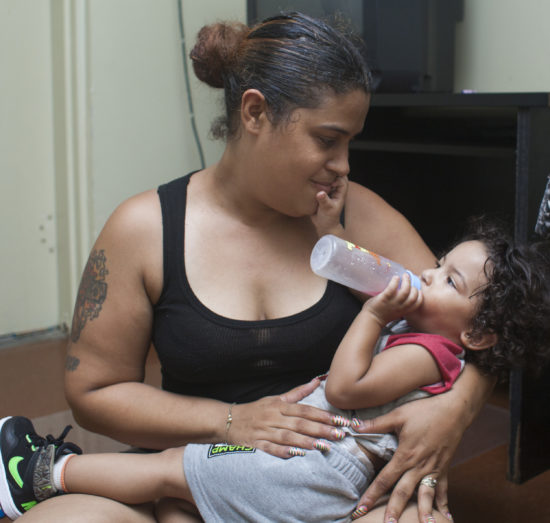 Jeanette and her youngest son

As a parent advocate, I used to advise parents in my support group about the reality of what they would face once their children returned home from foster care. I’d tell them that kids often act out, or don’t seem happy to be home. I’d tell them to try to stay calm and to think about their family’s needs and how to address them. I would tell parents, “I was you, I understand.”

My son was in foster care for three years. Three years of waiting for the judge to say, “Yes, Remi can go home.” I remember the joy of having those discharge papers in my hand.

This was the day I dreamed of.

His dad and I fixed up his space. We got him a Spider-Man toddler bed with matching sheets and quilts, and we covered his walls with stickers to match.

We also filled his toy chest with toys and activities. I was as happy as I could remember being in a long time.

My baby was home where he belonged.

I thought our troubles were over, but new struggles had just begun. Remi constantly asked to go home to his foster mother’s house. He wanted his backyard and his own room. But we were in a small one-bedroom apartment and my room was his room.

What should have been a joyous time was full of tears and fears. Remi began acting out.

One day, we were watching a movie and he began crying. I tried to hold him but he threw himself on the floor and kicked at me, saying he wanted to go home. His little voice disappeared with all the screaming and crying.

Watching his little arms waving around and his body swirling on the floor made me mad at myself. How could I allow this to happen? Was I responsible for his behavior?

I just lay with him on the floor and cried, too.

His father would try to hold him but got the same reaction. We both felt that our comfort was not enough.

I remember wiping Remi’s red eyes and thinking, “Oh my God, should I let him go back to the foster mother? Why didn’t the agency help me see that this was going to be a difficult transition?”

My husband encouraged me, saying things would get better, easier. He believed that Remi would come around. But I could not wait for my baby to love me again. I cried most of the time.

I wished I had an outlet. My husband was my only support and he was feeling the same—confused, frustrated and not understanding why Remi didn’t want to be with us.

I knew I needed to comfort my son. For a while, my husband and I just decided to give Remi whatever he wanted. We constantly bought him new clothes and toys. He got every new game system that came out.

I was trying to show my son that every moment with Mom and Dad was a happy time so he would forget the foster parent, forget the life he had without us.

Within six months, though, I learned that trying to buy his love and affection was damaging to us as a family. When I didn’t have the money to buy him things, he would throw himself on the floor and act out.

But other things actually did help Remi learn that we were his family and he was home.

First, I took him to parks and museums just to have time to reconnect and rebuild our bond. At the park, I didn’t just sit there and let him play. I played with him.

I also wanted to reassure him that he could count on me and that I would always be there, so I would hold his hand tightly when I walked him to school and tell him that I would be there when he got out.

The first few weeks of school were hard. When we arrived, he would cry and scream and grab my leg. I didn’t like to see him cry like he did when I visited him while he was in care, so I would hold him, or even turn around and take him back home.

But after two weeks, he was calmer about staying in school a little longer each day. By week three, he was staying the whole day.

I made sure I was never late picking him up. His eyes would light up when he saw me and he would run and jump for me to pick him up. Slowly he began to trust that I was there for him. I thought, “He knows I won’t quit on him, no matter what.”

I showed him love and I got it back in return. Our family life began to feel like it used to before he went into care. When Remi began hugging me and stopped asking for other people or to go home, I knew he felt he was home.

HOME IS WHERE HIS HEART IS

Remi is 19 now and still doesn’t want to leave home, but we must let him be a teenager and live his life. Still, letting go remains a problem for me. I want him to be near me and I always want to know that he is OK.

People say I baby him. In my heart, I owe him three years and he will always be my baby no matter how old he gets.

When you’ve waited months or years for your kids to come home, you expect things to get back to normal immediately. But our children are learning about us and we are learning about them. We need to be patient because reunification is a journey that takes time.

I tell parents, “Spend time with your children and reassure them that you are not going to leave them. And don’t be afraid to add structure and discipline. It’s a part of parenting and gives your kids the security they need.”