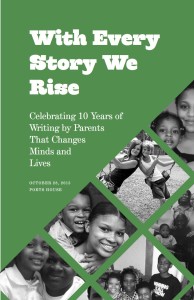 In June 2005, after four years of running writing workshops with parents affected by the child welfare system, we published our first edition of Rise magazine.

That issue focused on visits. Parents’ stories described how they made the most of the one or two hours each week they were allowed to spend with their children, usually in a small, crowded room at a foster care agency, with a caseworker looking on.

Describing her first visit with her son, Lynne Miller wrote: “The worst part was when I heard my son call the foster mother ‘mom.’ I flipped out. The worker and foster mom tried to reassure me that I still was and would always be his mom. But then the worker told me it would be two weeks before I would be able to see my son again, and that would be only for one hour. I was devastated.”

Rise shows the pain behind the fury, the sadness behind the disconnection, and the story behind the the court report for so many parents facing the child welfare system. Yes, Lynne was deep into addiction when a city investigator knocked on her door. Her 4-year-old son was watching TV by himself for hours while she got high. Less obvious was that Lynne successfully raised two older children. Her youngest son’s father had died while she was pregnant, and her mother died when her son was 3. That’s when their family life, going to the park, watching Sesame Street and Barney, and cooking dinner together, fell apart. Lynne wrote: “When my mother died a black hole opened up inside me. All the feelings I’d held back for so long came rushing back. I didn’t want to feel those feelings so I started snorting cocaine and smoking crack, too.”

Lynne overcame guilt, shame, and hopelessness with the support of her son’s foster mother and a parent support group. She overcame her addiction and got her son home. She became a parent advocate and a dedicated Rise writer.

In 2010, Lynne wrote the introduction to a Rise policy paper on the impact of federal law on parents. It was published by the Center for the Study of Social Policy and the Urban Institute, and reprinted in the trade newspaper Youth Today. Then Lynne traveled to DC to present parents’ perspectives to congressional staffers, speaking alongside former NYC Children’s Services Commissioner John Mattingly and former federal Health and Human Services Assistant Secretary Carmen Nazario.

Lynne’s story is Rise’s story. We connect the personal to policy. We build our contributors into knowledgeable speakers and leaders. We bring parents’ expertise into the conversation.

Baltimore child welfare commissioner Molly Tierney has said: “We rely heavily on experts to guide our work and that makes sense. It just also seems notable: one cannot be both an expert and a recipient of this intervention. This puts us at risk of not listening to the people that might know the most about what it is we’re doing. Kids who grew up in foster care are a great example. You know what they want? They want to go home.”

Parents who have faced child welfare have the expertise that we need to inform and reform this system, too. They know how family crises can escalate, why families in crisis don’t turn to existing supports or can’t find the supports they’re looking for, and who and what has hurt or helped them solve problems in their family lives.

Every year almost 300,000 children enter foster care nationwide. Nearly every child who enters foster care wants to go home but only about half get to. More children’s dreams can come true if their parents are heard and supported. Families affected by foster care want what we all want—to be stable and whole.

One story at a time, Rise is changing the story of who – parents are—and who they can become.