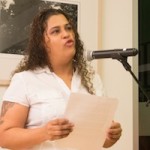 I am a mother who was arrested for child abuse.

I am now 35 years old and I have learned so much along the way. But at 19, I lost my son to the child welfare system for three years because I hit him with a belt.

I was raised that if you get out of line, you get hit. Mom and grandma would hit us with a belt or throw slippers at us, the old school Puerto Rica way. When I moved to Philly, step-dad was worse. He was the throw-you-down-the-stairs, you-gonna-respect-my-rules, don’t play type of dad.

To be honest, my reactions were harsh and even scary at times. I did not know how to control my feelings, my rage toward the system.

By the time my son came home, he was 5 years old.

I got involved at Rise eight years ago through a training program to become a parent advocate. At that time, I had nothing but hate for the system. I was also still hurt and confused about what happened to me and my son. The other parent advocates told me, “If you want to be a good advocate, you have to let go of that hate.” They said, “Why don’t you write with Rise.”

I was very reluctant to tell my story. Releasing my personal information to strangers was not my thing. Most people I knew didn’t even know my son had been in foster care! But I met with Rise’s director, Nora McCarthy. She said I could write about anything I wanted.

As I began to write my tears would roll down and I am not sure how but I just kept writing.

I was still scared to say what I felt or what I’d been through—scared of judgment—but the more I wrote the more I loved it. When I finally told the heartfelt story of my son’s removal, I could feel my heart not hurt as much.

After four years of writing for Rise, I was able to write a story that helped me understand how my behaviors toward the caseworker and foster mother had held me back. I wrote:

“Looking back now, I realize that the workers saw me as someone who would try to fix any situation with hitting, and my actions did hurt my case. But at 19 years old, I didn’t see that.

The workers had so much power over me, and I was in so much pain. I really needed them to explain things to me in a reasonable way. Instead, they were quick to judge and took the worst out of me. “

Now my husband I have four boys. We have never had child welfare involved in our life again.

For three years I worked as a parent advocate at a foster care agency. I used Rise stories to engage the parents I was working with, and I shared my own story.

Reading Rise in a support group helped my parents speak out on issues they thought they had to swallow, and it also assisted many parents in seeing where they were going wrong in their case.

Rise stories showed parents that they were not alone. They could understand how the system works and could navigate and strive on their own cases.

Going through the system, I didn’t know that what I said counted or that I could have a voice. I didn’t know how to carry myself and use my voice.

But Rise has made my voice Rise higher than I thought possible – not just for me but for other parents – and for that I am thankful for Rise.