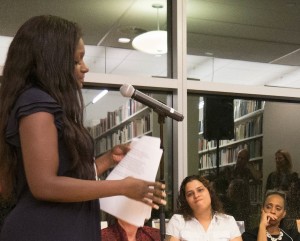 Two years ago, Rise’s director, Nora McCarthy, said to me, “Hey, we got invited to do a presentation at ACS (New York City’s child welfare agency) to some top professionals in child welfare. Let’s write something up.”

Whoah, I was nervous. “How many people?” I asked.

Working on my speech, I was super excited. I really wanted to be heard and to tell professionals how we as parents feel trying to get our children home from foster care.

Most important to me was showing them that parents with ACS cases are in fact people. So many parents feel talked down to and talked at in the foster care system.

Child welfare investigators need to realize that they’re usually meeting parents when they’ve hit bottom—but who they are at that moment is not all they can be.

When I got to the presentation, I saw nice trays of breakfast food and orange juice. Then I walked into the auditorium…there were 300 people!

I kind of panicked but I told myself, “This is my chance to make even more child welfare workers aware of how they directly affect the lives of already traumatized people.”

I myself was raised by my grandmothers and grandfather because my mother was a drug addict and my father a drug dealer. My brother lived in a foster home.

In my speech I told the child welfare professionals, “I never wanted my children to feel like I did as a child on the nights when I would cry myself to sleep because I didn’t know where my mom and dad were. But when I became a mother, I did not know how to take care of my son without getting stressed out.”

If you met me when I started going through my ACS case, you would never have guessed that I would be able to stand here today.

At that time, I was 22. My grandmother had taken custody of my oldest daughter. Four years later I had my son and began raising him in a shelter.

But I felt alone, sad and scared. When my son was a toddler, I started abusing drugs and alcohol so badly that I left him alone to buy drugs. That’s what landed him in foster care.

The day I lost custody of Xavier, I flipped over a table in family court. I cried so uncontrollably that the judge ordered a mental exam.

I had just then realized that I had failed my son.

But I also had bipolar disorder and needed to be hospitalized. I stayed at that hospital for 18 months.

I hope the professionals saw from my speech that parents like me can have a case, get our kids back and become productive members of society.

Since then I’ve made about a dozen presentations before more than 2,000 professionals in child welfare. I’ve also had two stories published in The New York Times. I was part of a group of Rise parent leaders who met in the spring with ACS Commissioner Gladys Carrión to give our feedback about improving the child welfare system.

I am not saying this to brag, but to show what parents can do with the right support.

I grew up told over and over I’d be nothing, just like my parents.

On the one hand I went to Catholic school because one of my grandmothers didn’t want me to get lost in the “project world.”

On the other I was subjected to constant house raids by the police looking for my dad.

I saw my grandparents go to work but still end up “barely 2 cents over carfare,” as my grandmother would say. I didn’t see a way outside of my project box.

My biggest goal was to sit on the bench in the park with an ice cup full of liquor while my babies played and my boyfriend made money for us.

Rise has offered me a different goal. Rise offers me a place where I can grow. I feel trusted and worthy, whether it’s because Nora gives me her debit card to send out the party invitations at the post office, or because I go to a professional conference.

Rise also empowers me because I’m around people who have had similar run-ins with child welfare and have made it out safely with their children.

I get to see my peers move up in life and go on to work other jobs, like Jeanette Vega, Bevanjae Kelley and Teresa Bachiller, all parent advocates in NYC. It gives me hope knowing that these people have had not-so-easy lives just like me and they still made it. I look up to them and I can ask them for advice without being judged or feeling looked down on.

It’s also an amazing feeling to be able to tell people from my old and new neighborhoods that I have articles in a magazine and that they should read it when they are in the ACS waiting area—because most of my friends do have cases.

I love being able to send my friends to the Rise website if I know that what they are telling me is dealt with in a story in Rise. The stories have good information on how to get out of difficult situations and about the programs other parents have used that helped or didn’t help.

Now, my friends don’t always read online but at least now that I have Rise I can offer more to my friends—information that was not offered to me when I needed it.

Next month, Jeanette and I will be speaking 9 times – to 500 people! Rise is on the rise.

We’re presenting to the attorneys that prosecute parents, to caseworkers who investigate parents, and to professionals at Manhattan Family Court.

We’re also meeting with congressional staffers who want to change federal funding so we can keep more children out of foster care.

There is still too much emphasis in child welfare on only helping the child.

Not just workers but judges and even politicians and the public are not seeing it as a system to help parents and to support the whole family.

Professionals need to hear more from parents about how to make that happen. They need to know there are ways of working with us that can get better results. They need to know which services really work. They also need our insight on the difficulties of navigating the system from the client point of view.

This winter another Rise writer and I presented stories at a panel about young parents’ mental health.

The man who spoke before us was a therapist who worked with youth in foster care. He sounded proud of recommending to the court that parents’ rights be terminated. He said, strongly, “I’m a child advocate!”

Helping children means helping parents. My kids needed me to get better for them to have a better life.

After we read our stories, this man surprised me. He came up to me and said, “Thank you. Where can I read these stories? People like me need to hear them.”

I still struggle with depression. Some days I tell myself, “No, Pia, don’t go to work. Stay home in your bed and sleep. No one cares what you think.”

But then I remember how many stories I’ve written and how many minds I’m changing. Then I’m like, “Yes, Pia, get up and go. Go help someone through your story today.”