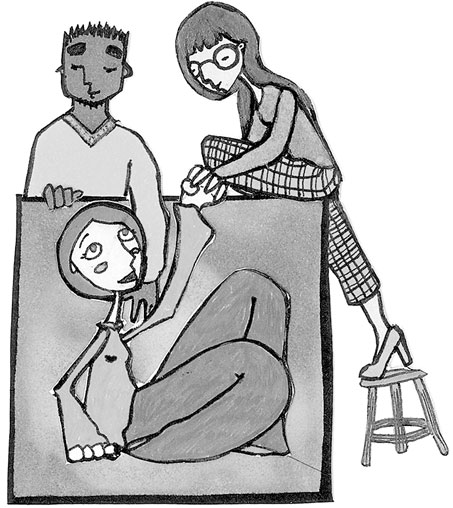 I am a parent advocate at the Center for Family Representation (CFR) in New York City. CFR provides parents in child welfare proceedings a lawyer, social worker, family advocate, and parent advocate to support them.

Parents whose children were removed and put in foster care often feel like they can’t trust anyone. Many parents are victims of childhood abuse or domestic violence; some use drugs to deal with their pain. They’re used to manipulation and abuse. Most have intimacy issues. They fear that if you get too close, you must want something from them, or you want to hurt them. My job is to help parents trust us and see that we’re going to help them.

When a parent first comes to CFR, she meets with the social worker and the lawyer. Sometimes they will ask me, “Can you help me with this case?” Usually, that’s because they’re having a hard time connecting with the parent, or feel the parent is not being honest.

I can talk to parents in ways that some social workers and lawyers cannot. My attitude is, “I know all the excuses, all the lines. I don’t have to sugarcoat things or treat clients with kid gloves.”

Not long ago, one client went off on an attorney who agreed to a recommendation that she go to inpatient instead of outpatient treatment. She was yelling, “That’s not what I want!”

When the client walked out, I followed her and asked, “What is going on here? That’s unnecessary drama. You’re sabotaging your own case! This attorney is working with you. One thing didn’t go your way and that’s how you act? Do you want to get your child back or not?”

She was too upset to put down her guard, but I chose my words carefully and spoke softly. She calmed down and by the time she went home she said, “I’m going to think about what you said.”

Several days later, my co-worker told me the client chose to go to the inpatient program. I’m proud to say she completed the program and reunited with her children.

One challenging case involved a mom with bipolar disorder who was using marijuana. She was participating in services and visiting her son, but was having trouble quitting marijuana and kept refusing treatment. She also had a habit of flipping out in court.

I don’t always tell clients about my history of addiction or what I went through to reunify with my sons, but I had to share my story with her to gain her trust. I met her in court one day and told her, “I used to be in your shoes. I resisted treatment for many years and didn’t believe anyone could help me.”

Slowly she opened up. She told me, “I don’t think I can stop using.” She was also convinced that, even if she finished treatment, the system was not going to give her son back. She didn’t understand that her son remained in the system because she was not complying. I told her, “Once you start taking care of you, things will fall into place. It will happen as a process, not overnight.” It took her a month, but she entered treatment.

Sometimes I can’t make a connection. Some parents are not open. Everything is everybody else’s fault. I tell them, “No matter what I do, no matter what the social worker or the lawyer does, if you don’t do what you need to do, nothing is going to change.”
Frustration comes with the territory. One day I told a parent, “You are not alone. Do you have any idea how lucky you are that you have a team? I didn’t have a lawyer and fought the system on my own.”

Still, I build trust with the parents by following through. They’ll call and ask, “I need help with housing. Can you meet me?” If they owe rent or are getting evicted, I go to housing court to advocate for them. If I can’t reach the parents, I go to their homes to see if they’re OK.

Without a team, it would be hard for the attorney and the parent to succeed. The attorney is busy with the court process and can only do so much. What happens to the rest of the process?

At CFR, I feel lucky to be able to help the parents get back on track. We don’t do the work for the parents. I always tell them, “You’ve got to do the footwork.” But they can trust us to stick by them.