When my daughters were 4 and 2 years old, I began to feel so numb to my children. I grew up in foster care and have been diagnosed with borderline personality disorder. At the time, I felt alienated not only from being a mother but being a person. I was lost in space, feeling nothing but emptiness. I didn’t feel human. 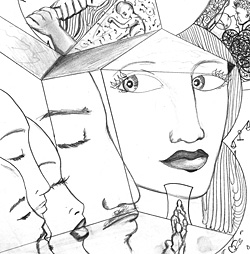 When I tried to play with my children, I would get an unsettled feeling that the walls were closing in on us and the kids and I were going to suffocate. A few times I just felt weird. I was obsessed with thinking, “These are actually my kids. I gave birth to them.” It was hard to grasp that I was their mother. I felt like I was a little girl myself.

Other times I felt grown but I was frustrated by seeing that they were enjoying their childhood while I was robbed of my own. I felt torn between childhood and adulthood, between being a mother or being my kids’ sibling and rival. Sometimes I would even think, “Thank goodness my kids can’t read my mind or else they’d see a monster instead of Mommy.”

Now, three years later, I see how closed off I was. My kids were seeing me constantly off in cyberspace, or on the apps and music on my phone for long amounts of time, finding anything and everything to drift myself away from reality. It’s so painful to remember myself in that state of blankness, knowing I wasn’t feeling, and yet not really wanting to feel all the painful and overwhelming emotional baggage I was harboring.

At the time, I didn’t know that my emotional withdrawal could impact my babies. I thought, “They’re just babies—what do they know about emotions?” But no matter how much I tried to hide behind a phony smile, my kids knew something was wrong with Mommy.

ACS came to my door because I had gone off my medication and started fighting with my husband. The fighting was serious. My husband called my therapist, and because I would not comply with treatment, my therapist called child protective services.

My behavior was far from normal but I could not understand the charges against me.

The way I saw it, my kids were good. They had a roof over their heads, food, clothes, diapers and toys, and I kept them up to date with appointments and services. As a child, I didn’t have those things.

I also had never taken out my anger on my kids, and when I fought with my husband, the kids were in a different room. I didn’t know kids could be affected by their parents fighting if they were not in the same room.

Most importantly, I didn’t realize that my idea of a mother’s role was pretty limited. I didn’t show a connection to my kids beyond changing diapers, washing, dressing and feedings. The professionals who came into our family could tell that I was a devoted mother who loved her kids, but they also saw that something was missing.

The Help I Needed

These things that were invisible to me began to make sense after I got back on my medication, began attending individual, family and marriage therapy, and took anger management and a group called Parenting Journey.

The Parenting Journey I attended was a 14-week group for parents of children with special needs. (Both of my daughters were diagnosed autistic.) When I first went I felt overwhelmed, guilty, stressed, confused, angry and depressed.

Then one day the group leader read an inspirational piece about parents having a tendency not to pay attention to their own emotional lives. The article asked, “How can parents help their sons and daughters feel comfortable with their feelings if they are uncomfortable and frightened by their own?” That made a big impression on me.

Open to My Children

Therapy was also a supportive service for me. Many times I vented, saying things like, “The system didn’t take care of me, so how is it they want to take my kids?” I would rant and rave about how the system is a money scam and the workers were kidnappers.

Underneath, though, I felt stuck with this terrible mental illness. Borderline feels like being stuck emotionally–like having the extreme joys, tantrums, fears and separation worries of a 3- or 5-year-old. I never had anyone to teach me to slow down, calm down, look at the big picture, love myself and plan. I needed my mommy but my mommy wasn’t there.

I started therapy feeling almost jealous of the attention I was supposed to be giving to my children’s feelings. Over time, I became more confident that all the work I was doing as a mother would help me gain more control over my illness. Everything I do with my kids in mind is a gift to me as well.

Seeing What Was Invisible

Getting support with my own pain also helped me be more open to the pain my children feel when I act so withdrawn, and it made me want to build a stronger bond with them.

I began to see that when I was missing in action mentally, my girls would try to bring me back.. Our 4-year-old, Emma, tried to break up arguments when my husband and I fought. My 2-year-old, Michel, tried to bring herself to my attention by banging her head or doing other things that I thought were weird, like repetitively saying, “Michel loves Mommy.”

Both girls were extremely clingy. My children would even wet themselves on purpose because they were desperate to be babied again. I didn’t realize that they felt rejected or needed attention, so I didn’t see their behavior as a sign that they were trying to connect.

It’s been difficult but I have been able to change bit by bit. I’ve had to be very brave to take the risk of opening myself up to my kids even though I was afraid that they would reject me or remind me of my own losses.

My oldest daughter is my biggest challenge. I see myself in her strong emotions, and that scares me. When I play with Emma, it bothers me that she gets hyper to the extreme. We like to play-wrestle or play games like Simon Says, Red-Light Green-Light, or tag, but often Emma starts jumping all over, playing too rough and not knowing when to stop. Once she’s in go-mode, it’s hard to calm her down.

Sometimes I’ll help her to sit still for a minute, but then she has to burst up out her seat and make moves. Often she’s just expressing happiness with her body. She wants to dance and to sing loud Glee songs. But she won’t stop sometimes until she is out cold in the middle of the floor and I have to put her to bed. It feels impulsive, uncontrolled.

These moments used to really stress me out. I felt trapped. It would be a mad house—an insane, unstable home—if I gave in and did nothing but play with Emma without reinforcing some kind of structure. Still, I didn’t want to come off as this mean, bossy, evil mom. I wanted to be someone she could trust and rely on.

Before, I would avoid playing, or just keep silent until I had reached my breaking point. Now I help myself calm down by deep breathing and giving myself a mental pep talk. Then I count, a gesture she takes as a warning. Sometimes she’ll listen.

Other times she ignores me. Then I go to Plan B, time out. If that doesn’t work, it’s time for “hands on the body.” I sit her in my lap and hold her with her legs crossed and her arms crossed, with my arms gently but firmly holding her arms, so she won’t hurt herself or me. I whisper calming and loving words in her ear, like, “Mommy loves you and Mommy needs you to calm down.” I repeat this until she cools down and listens. Breathing, counting and having a back-up plan have helped me to keep playing with my daughter without losing it.

For three years, ACS and the court monitored my family. Our case just closed in April. At times, I have been very angry with the way ACS has treated my family. Twice my girls were removed and placed with strangers. Both times, the judge sent them home in less than a week. Those days apart scared and stressed us all. At the same time, I feel thankful for the knowledge I’ve obtained from attending services and for all of the help I’ve received.

Things have changed in my family. I feel different. The kids’ behavior is different. All of our service providers notice. Michel is not even considered autistic anymore. The therapists think she was just stressed out and mimicking her sister’s behavior.

Emma no longer has to divide Daddy and Mommy. When my husband and I have disagreements, we can handle it in a more mature, safe manner, away from the kids. Our arguments are less heated. We talk while the kids are asleep, or in marriage therapy.

I know that I am not healed yet. I feel in touch with myself emotionally again as a mom and a wife, but that’s as far as I see myself as worthy. Myself as an individual? I am still just existing, not living.

That feeling of abandonment never disappears, even as an adult. Looking at my kids and seeing them being so happy at times makes me cry. I say it’s tears of joy but deep down it’s because of the sadness of that inner child in me, feeling like, “Why did I never have this natural smile as a child?”

Still, I find it very beautiful to think of myself coming to recognize my own worth. I am more than a provider of a clean home, meals and so on. I am someone my kids really love to be with. My kids glow when they feel my eyes and smile on them, as they do more and more these days.

No Longer a Child

I’ve had to face that I am no longer a child. My childhood came and went. I have to grieve my losses and keep growing up if I don’t want my children to endure the same painful childhood I had. But it’s going to take time and practice to fully shake off my childish ways.

Not long ago, I bought some Barbies at a yard sale. I loved Barbies as a child. I played with them all the way to age 12.

I bought those Barbies for myself and wasn’t planning to share them. My husband was telling everybody who walked by us that I was working out my childhood fantasies. He told me to not be selfish—to share. I was telling him no!

But when I got home, I saw my kids looking so happy and amazed, gazing at the bin full of Barbies. I ended up sharing them and having fun with my girls.