All parents feel overwhelmed sometimes when their children do normal things, like have temper tantrums or act demanding. But for parents who have experienced trauma, those difficult moments can remind us of painful childhood experiences wh 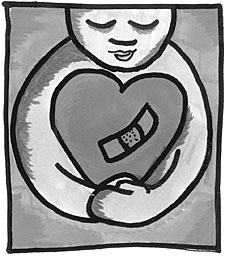 en we felt terrified or overwhelmed by someone who was out of control. When that happens, we can respond by getting too angry or by shutting down.

Susan Chinitz, the director of the Early Childhood Center at the Albert Einstein College of Medicine, calls this the “trauma lens”—we see normal behaviors as threatening. But Dr. Chinitz, who runs a program through Bronx Family Court for moms who have babies in foster care, says that Child-Parent Psychotherapy, where moms and their children play together with a therapist, can help parents make great progress in removing that “trauma lens” and building a strong bond:

Q: Can you describe the impact that trauma has on parents?

A: Trauma is an experience that makes a person fear for her life—or a loved one’s life—and overwhelms a person’s ability to cope. People can be traumatized by things like earthquakes or 9/11. But research shows that the most devastating trauma occurs when people who are supposed to love us and keep us safe do us harm. Things like physical or sexual abuse or domestic violence, especially when they occur in close relationships, can shake people’s sense of trust and make it hard for people to trust anyone. Trauma can also hurt how people feel about themselves, even though the abuse is not their fault.

Trauma can also impact how parents respond to their children. Parents may have more trouble staying calm with their children if they’ve experienced a lot of trauma. That’s because, when we’re in dangerous situations, our bodies and brains are programmed to have quick, automatic reactions—to either fight or flee. But for people who have had a lot of traumatic experiences, their fight or flight reaction is easily triggered, even by things that are not dangerous, like when a child cries.

A mother who was brought up in a nurturing relationship might see her baby having a tantrum and try to comfort the child. If the child is hitting, she might teach the child that we don’t hit. But a mother who has experienced a lot of violence might put a lens of past abuse on the child’s behavior and find the child’s hitting or tantrum aggressive and scary. She may become much more punitive or aggressive back.

When people have had many harmful experiences, they also try to protect themselves from their own suffering by blocking out their feelings, and they may block out their children’s feelings, too. Sometimes, that leads parents to not be as concerned about danger as they should be. They might think their kids need to toughen up because survival is hard. Or they may have grown up with so much danger they experience it as normal. Other times, parents can become overly protective of their children because they see danger everywhere.

When a parent is easily angered, rejects the child when the child acts needy, or is not responsive, a child may become “insecurely attached.” Attachment is the ability to be in a relationship with at least one person who is extremely committed to you, who’s predictable, and who finds joy in the relationship. When attachment is secure, children generally feel secure about themselves and have positive expectations of others. When attachment is insecure, children feel unsure of their worth. Some children cry a lot or cling. Other children dampen down their need to depend on their parent and act like they don’t need anyone. But we know inside they’re really suffering.

Q: How can parents heal—and build a safe bond with their children?

A: Some parents are aware of how past trauma is affecting them with their children. But a very big part of trauma is avoidance—wanting to not have to reflect on what you’ve been through because it’s too painful to think about. In therapy, we try to help parents feel safe becoming more reflective.

One mother came to therapy with her three little kids, who had all witnessed a lot of violence in their parents’ relationship until finally the father was arrested. When I met the mom, she wanted to know why the court was forcing her to come to therapy. All she wanted was to stop thinking about the violence and move on. Meanwhile, in the playroom, the boy was pretending to arrest his little sister over and over again, and she was getting very scared that she was actually being arrested. The children were showing in their play that they were not able to just move on.

Parents often think kids are too little to understand—or hope they are. It can be very painful to realize that our children are in pain and we’ve caused it. But parents also have the power to help their children heal. We try to help parents stand in their kids’ shoes so they can acknowledge when something terrible has happened in a child’s life, see how their children feel, and respond in a safer, more nurturing way.

That’s especially important when children have experienced trauma themselves—including the trauma of being placed in foster care. We use play as a way to help parents and children enter the story of what has happened in a family. Telling the story gives parents a chance to assure their children that whatever happened in the past is not going to happen again. For parents and children, trauma does not have to become a place where everybody’s stuck for the rest of their lives.