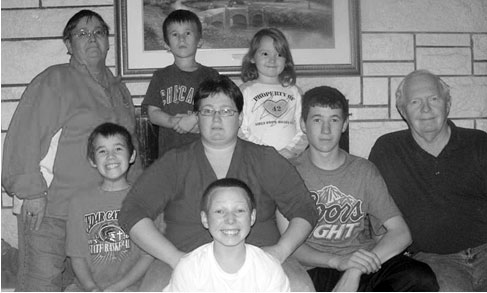 From the day my grandson Nathan made his arrival into this world, we felt that something was different. Nathan was a fussy baby. He didn’t like to be held or rocked. Getting him to sleep was always difficult. As he became a toddler, Nathan couldn’t sit still or stay focused on any one toy for any length of time, even watching TV. Interacting with other kids his age was not easy for him. Nathan had a hard time sharing toys and things always had to go his way or he would throw a tantrum.

Our doctor assured my daughter that Nathan was a typical little boy and said we should wait until he reached school age to become concerned. After all, Nathan was developmentally on track. But finding daycare and babysitters was next to impossible. A few times of dealing with Nathan was all it took for a sitter to quit.

Just before Nathan turned 6, my daughter pushed to be referred to a specialist. We lived in rural Nebraska so we had to visit doctors 90 miles away at the Behavioral Health Hospital in Sioux Falls, South Dakota. At the very first visit, they told us that he had ADHD and oppositional defiant disorder (ODD). Later Nathan was also diagnosed with bipolar, and a seizure disorder. We were heartbroken but relieved to get Nathan started on treatment.

At age 7, Nathan was hospitalized for the first time. Over the years, his aggressive behaviors became more pronounced. We experienced multitudes of med changes and dosage changes. Nothing worked for long. Just when we thought things were getting better, the meds would seem to stop working.

After a series of terrifying meltdowns, Nathan was placed in a residential treatment facility when he was 10 years old. Nathan stayed there for 11 months. It was not a good experience for any of us.

The treatment center was 170 miles from our home. We couldn’t get to see Nathan as often as we wanted to, and it was stressful and expensive and stressful to visit. Plus, our first visits were supervised and lasted only two hours. We were made to sit at a table in the kitchen of the cottage where he was living with several boys and a staff that rotated with very little consistency. A staff member sat at the table with us. I found this very demeaning. Nathan had not entered treatment because we harmed him in any way. It was four months before we were allowed to take Nathan out of the cottage.

We only had family therapy every other Friday. Nathan’s first therapist was very inexperienced. She insisted that Nathan’s four siblings participate in therapy at least monthly, even though two were very young and two had to miss school to attend. Some days we would all arrive at therapy only to have the children asked to play in the hall.

As time passed, we watched Nathan slip into a deep depression. We continually questioned the treatment staff about what they were doing to help him. My daughter would call Nathan all of the nights we were allowed to and call the staff each evening to ask how Nathan’s day had gone. The staff told her that they had never had a parent call to check in before and that they didn’t have time for it!

A Matter of Time

At no point did we feel that Nathan showed true improvement. He only learned to play their game and do what was expected so that he could come home. At one point, my daughter asked the health insurance company to allow Nathan to transfer to another facility because was making no progress. That request was denied.

Finally, Nathan came home. We went back to the weekly family therapy we’d attended before Nathan’s placement and worked with a case manager to access all of the services available in our region. Unfortunately, our area had few services. The nearest respite care was 60 miles away.

It felt like only a matter of time before Nathan was out of control again. Nathan hadn’t learned any skills to handle his anger or redirect his frustration. After several good months, Nathan became less able to control himself or concentrate in school. The doctors adjusted his medications but Nathan’s explosive behaviors only became more severe.

Six months after he left the residential program, Nathan had two meltdowns a few weeks apart. He threatened his 8-year-old brother with a baseball bat and his mom with a golf club. He threw everything in reach and was hitting and kicking. We headed to the hospital, where the doctors said that Nathan was a threat to himself and his siblings. We heard the news we’d feared: they recommended another course of residential treatment.

A Rock and a Hard Place

This time, though, we pushed and pushed for Nathan to be placed at a facility with a good reputation—Boys Town in Omaha, NE. We’d seen that the atmosphere and attitudes there were so different from other facilities. The staff were friendly and showed honest concern. They answered all of our questions immediately. They seemed to genuinely care that we were comfortable leaving Nathan there. After a month of advocating for the placement, Nathan was accepted.

We knew that placement would be hard on Nathan. During our tour of the unit, I walked through a door and heard it lock behind me. That’s when I truly realized how different and scary this would be for any 11-year-old. As my daughter packed Nathan’s things, she was sad and exhausted but relieved and hopeful.

The day we said goodbye to Nathan, we could only reassured him that we would see him soon. We held each other and cried.

The following evening at supper, my daughter and I casually suggested to my husband that moving to 150 miles to Omaha might be in everyone’s best interest. We could visit Nathan more often and be more involved with his treatment. My daughter’s other children would have more time with her. So a month later, our entire family moved.

Living nearby was so much better. We started with one visit and one family therapy session per week. The visits included Mom, Grandpa and Grandma, and later Nathan’s siblings, two at a time. Soon we had two weekly visits, and within three months, Nathan was able to come home for the day.

I was the lucky one—I got to drive him to our new home. As we drove through Omaha, Nathan kept asking, “Is this our street?” At our driveway, his eyes got really big and he said, “You really did move!” It was fun to watch him go room to room, checking everything out.

In family therapy, we all learned to re-direct Nathan when we saw that he was getting upset or having difficulty making good choices. Most importantly, Nathan has learned to recognize when he is having a difficult time. There have been times, especially around sharing or having to compromise, when we’ve known that he normally would have gone immediately into a meltdown. Now we can actually see in his face that Nathan is pulling himself back into control. He will remove himself from the situation and go to his room, read a book or listen to music until he feels that he’s in control.

As time has passed, our visits with Nathan have changed drastically. At first, his siblings did not want to be in the room with him without an adult. Over time, his siblings learned that Nathan could control his behavior. Nathan is now able to play games without getting mad if someone beats him. He also is willing to help with chores.

Nathan and his siblings now enjoy time together outside or down in the family room. It is wonderful to sit back and watch them play.

Our treatment team kept Nathan moving forward. After we’d had weekly home visits for a month, Nathan was able to move from the controlled hospital setting to the Specialized Treatment Program, where he lived in a home with three other boys and a married couple who were “family teachers.”

Last Christmas, Nathan was able to come home each day of the break, spending nights at Boys Town. We were so excited. In the spring, Nathan was scheduled to begin overnights, but I had a heart attack and surgery. By July I had recovered and he was able to begin weekend visits.

In August, we took Nathan on a family vacation and saw how far he had come. One night Nathan was supposed to attend his first Packers game. At the last minute, Nathan decided to stay home. “If the crowd and noise bother me, everyone will have to leave the game to bring me back,” he said. This was a major breakthrough. He knew his limitations and was willing to sacrifice something important to ensure that others could enjoy themselves.

Now we are preparing for Nathan to return home. In addition to weekends, he comes home on Wednesdays after school so he can blend in to the family routine of homework and supper. In March, we will add in Tuesday evenings. Nathan is doing so well. He is back at grade level in school and has a A- average!

We are looking forward to having our family whole again. It’s been hard to have an empty spot at the dinner table and an empty bed. Nathan says the hardest part has been missing birthdays and special days with the family.

When May rolls around and you hear the cheers of joy coming from the Midwest, you will know that Nathan has come home. We know that we will have good times and still some bad times but we feel that we now have the knowledge and the tools to work through difficulties. We’ll have to remain focused and working together so that when Nathan does come home it will be forever.