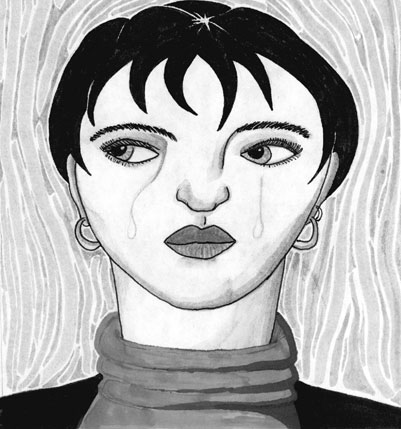 I was 9 years old when I started getting drunk. I would sit in my friend’s house in her brother’s room where the walls were black and the lights were black and everything glowed in the dark. It was 1969. As she played slow music I’d drink Mad Dog 20-20 and cry because the pain I felt was overwhelming.

I cried because my first memories were of getting hit by my stepfather what seemed to be every day. Some days I would wake up in my crib to him punching my head. He was my bogeyman, my first monster.

My second started haunting me when I was only 3. He started out safe and sweet with a kiss. I remember the little yellow dress I wore that first day, and when he was done hugging on me, all I remember thinking was, “Was that bad what just happened?”

I put a stop to it when I was 9. Like Scarlett in Gone With the Wind, I told myself that things would be better tomorrow, and I tried to forget about the pain I was in today. But like my biological father, an addict, my brother, also an addict, and my sister, who used until she stopped, I turned to drugs to help me.

For many years, I drank, smoked marijuana, and used cocaine and heroin. But I also functioned. I raised my brother’s daughter for 14 years. I cleaned offices. I was an aerobics instructor. I even worked as a bookie. Mainly, I boosted, stealing from one store to sell to another.

My mother told me my addiction was killing her. My sister begged me to stop. But eventually they accepted that I was going to be an addict for the rest of my life. I don’t know if it was good or bad that my family let me in even while I used, but I know they did it because they loved me.

I also married a wonderful man. Sammy was a functional addict like me. He was a mechanic and he worked all the time. It would be very late, 2-3 in the morning, and he would still be fixing someone’s car. If they were stuck somewhere, we would go fix their car even if they had no money.

No Way Out But to Fix

But in my 30s, my addiction grew worse. Every eight hours or so, I’d use five to 10 bags of heroin, and I started using crack too. Life still felt good when I had my fix. But if I didn’t fix, then I’d be sick, with the shakes, paralyzed, going to the bathroom on myself, everything coming out of every hole. There didn’t seem to be any way out of all that sickness except the sweet way out, to fix.

It was during that time that I became pregnant. From the very beginning, I’d fantasize, picturing the baby at 2 in a Pamper in the summer, playing outside. But the stress of wanting to stop using led me to use even more. For months I would say to myself, “You have to stop! You have to stop!” But I never did.

Dear Samantha, I would like you to know that the day you were born was one of the happiest days of my life. You came into the world at 3:28 p.m. Despite all my guilt and remorse, I also had the nerve to be so happy. I am sorry but I was.

I was lying in the hospital bed crying, thinking to myself, “Oh my God! What have I done? What is going to happen to you, to me, to us?” Then you showed the top of your head. And in my whole life I had never been filled with so much joy and love. The love that filled my body was so overwhelming that for a moment I knew that God was in the room with me.

Then I heard the doctor say, “Sylvia, Sylvia, look at me. This is going to be a big one. Push! Sylvia, push!” I took in a huge breath and began to push, and between each breath I kept saying, “I am sorry! I am sorry!” As I watched you fight to come out, it was the best day and the worst day of my life. Because, oh my God, they were going to take you from me.

The doctor said, “Sylvia, why are you crying? It’s over. You have a beautiful baby girl. She’s good. She weighs 5 pounds 12 ounces. Ten fingers. Ten toes.” As she put you on my chest, you stopped crying and I stopped crying, and I said, “Oh my God, doctor. She is good. Thank you.” Up to this very day, I can at any time think of that day and remember how good I felt with you the day you were born.

After my daughter was born, my sister agreed to care for her, and for a year she raised her.

It put a hole not just in my heart but in my soul that my daughter wasn’t with me. I started using heroin every hour and crack every 10 or 15 minutes, but even on drugs, I always felt stressed and guilty. I had days that I said yes to men when I wanted to say no. Because I felt I had to fix.

I would visit my daughter every couple of months and when I saw her I felt happy. But when my daughter was a year old, my sister died of breast cancer. Before she died, she gave my daughter to my uncle and his wife. Instead of letting me in, they told me to stay away and they told my daughter I was dead.

Once when my daughter was 3, I went to my uncle’s house to see if I could see her. When the cold gray door opened, all I could say was, “Hi. How are you?”

My uncle’s wife said, “Fine. What do you want?”

With a blink of my eyes that seemed to take forever, I tried to say, “I came to see Sam-” and I couldn’t even finish saying “-mantha” when she opened her mouth and said, “No.”

I just stood there and started to think about a thousand things. I could hear the TV in the apartment playing Wheel of Fortune. Then from behind my uncle’s wife I heard a little voice and I realized, “Oh my God, that’s Samantha, my baby.”

I bent down and extended my arms and said, “Samantha, Samantha! Here! Look!” and I shimmied my hand. My uncle’s wife just closed the door. But I knocked again and she agreed to let me in, maybe because she was scared I might notify the authorities. (Back then I didn’t know they had never gotten legal custody of my daughter.)

‘I Am Your Mother’

That day, I sat with my beautiful baby and I asked her how she was and what she liked. I held her little hand and thought, “Remember how it feels so that later you can feel her even when you are not together.” I hugged her so hard and then for a quick slow second I looked right into her little brown eyes and said to her, “Samantha, I am your mother.”

In that second, her eyes turned away from me and glanced at my uncle’s wife. Then she closed her eyes, and when she opened them again, she was staring right back at me, as if her brain had taken everything in. I wanted to reach into her soul so that the knowledge that she had a mother who loved her would stay in her forever.

But then my uncle’s wife realized what I had said and she rushed me out the door.

Later, I had a son, and my uncle and his wife got custody of him too.

Dear angel, my son, my baby. How do I ever begin to tell you how sorry I am? When I try to explain why I wasn’t there for you, it’s hard for me to keep going. Sometimes I can’t stand my own bullshit enough to tell you I love you.

When I found out you were coming, I said, “Oh God, please let me get help.” I went to a methadone program. I stayed clean from the time I was three months pregnant until five days before you were due.

The day you were born I was really out of it. When the doctor took you out of me and went to weigh you, I kept thinking how I really tried to keep you, and after you were born I went upstate to an inpatient drug rehab program. Sammy and I went to court to fight for you. But by the time of the blood test we had already relapsed. I still ask myself, “How could I have done this to you?”

I haven’t been able to do much for my children so far in their lives. I hope that one day I can help them by sharing my story and my love.