For 25 years, I’ve been smoking marijuana to cope with a lifetime of 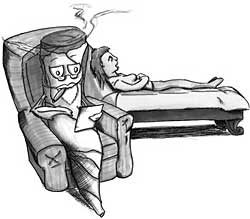 When I was young, my family life had some order. My sister’s father and my mother had strict rules for us. We went to church and my sister and I sang in the choir. I remember singing on the fire escape with my sister. People passing by would stop to listen.

But my mom also hit and kicked me nearly every day, and when I was 14, things got a lot worse. My mother was accused of running with another woman’s husband and we had to leave our church. My stepfather left us and moved in with another woman in our building. My mother quit her job as a corrections officer and became an alcoholic. Then she got a new boyfriend who wouldn’t stop touching me. When I told her what he was doing, she didn’t believe me. I felt lost and alone.

I’ve also been raped a number of times, the first time when I was 15 and the last time seven years ago. Sometimes I ask myself, “Was I put on this earth to be abused?” I wonder if something is wrong with me that I’ve been through so much pain. I fear that I’ll never be able to keep myself safe.

As a child, I coped with terror and despair by losing myself inside. I would go into my mind and pretend I was a doll in a big dollhouse. When my mother’s boyfriend abused me, I felt like I came out my own body and looked at myself lying there.

My brain learned to block the stuff I didn’t want to remember. I lost days and hours disappearing from myself, and I still do. When I was younger, it was comforting to be able to shut myself in a world where I didn’t have to feel anything. But now, as an adult, it seems scarier. I come back to reality and don’t even know what day it is.

Smoking My Life Away

At 18 I tried smoking weed for the first time. Soon it felt like I couldn’t stop. Smoking seemed to help me stop thinking about painful memories.

Now, at 43, I’m feeling very depressed that I can’t seem to stop smoking weed. I feel like I’ve totally messed up my life. I never finished school. I never accomplished my dream of making a book of my poetry. When my kids were little, I barely went anywhere with them because I wanted to smoke. Now my children are grown and I regret that I kept them isolated like I was.

The worst part is that I started smoking in order to forget, but weed just pushes my feelings to the side for the moment. When the high wears off, I’m back to where I started: depressed, angry, lost and confused.

I have tried to get help to deal with the trauma of being abused and raped. I’ve seen so many counselors and psychiatrists and I’ve tried taking medication.

But despite years of counseling, I’m still the same. I honestly don’t know how you can take someone’s nightmares out of her head.

Afraid to Open Up

In 2007, I ended up in rehab. Child Protective Services came to investigate my sister, who is addicted to crack and was living with me, and they asked me to take a drug test, too. I had to go to treatment to ensure that my children weren’t removed.

I stayed clean 18 months. I could concentrate better and breathe better. But I found that everything bothered me and made me angry. Kids crying, people talking loudly, noise. When I was sober, all the bad feelings and memories I tried to block surfaced stronger and angrier.

The program had anger management groups and a survivors group for women who had been raped, but I never spoke about my issues. I kept them in and that led me back to smoking again.

I’ve been trying new things to build up my confidence. In 2008, I joined the Parent Leadership Training at the Child Welfare Organizing Project (CWOP), a parent advocacy organization in New York City. I also started writing for Rise. Joining CWOP and Rise make me feel alive inside.

I’ve also been trying a new way to block upsetting thoughts. When bad thoughts come into my head, I tell myself, “Try hard to think of good things that have happened in your life.” I like thinking about my kids when they were young and how good it felt to be a mom.

In the last three months, I’ve been trying hard not to smoke. I stay outside and I keep around people who don’t smoke, and I come to CWOP and Rise to help out. But I still do smoke, usually at least three times a day. If I don’t, I get angry at everything, and at night, all types of bad thoughts run in and out of my head.

I know I need to get help again. For years now I’ve been having panic attacks at least twice a week. My body shakes like I am having a seizure and my heart pounds.

I want help. I’m dead inside. On the outside, I might not show it, but inside there’s only darkness.

I Want a Change

Not long ago, I started going to survivors’ groups on Mondays. The woman there said she was going to get me to a psychiatrist. I quickly stopped going.

I keep thinking of the last time I got help. I felt more confident. I was going places and doing things. Then I got raped again. I want to change my life but I can’t go through that again. I hope I can find the guts to try again. I want to do something with my life besides smoking all the time. I can do this, I know I can, but I’m afraid, so afraid.