Most parents whose children enter foster care have to take parenting classes in order to get their children back. I went to two parenting 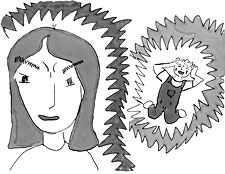 classes that didn’t help before I found a program that worked for me.

The ones that didn’t help were the ones where the instructor read to us from a big parenting skills book or played old videos of moms trying to get their kids to listen. Then the instructor would say, “Ok, what did you learn?” or just, “Hey, use the skills you saw today in this video.”

I’d sit there thinking that the strategies didn’t apply to my son. The book would say to put your kid in a time out if he acted out, but when I tried time out with my son, it only made him angrier. When I told the instructor that, she just said, “Keep trying.” I felt defeated, like a failure.

At the time, my 5-year-old son was living with my grandmother because I’d been arrested and then placed in a mental health facility for 18 months. By the time I moved back home, I’d overcome an addiction and was managing my bipolar disorder.

Xavier was about to come back home and I felt overwhelmed because we still didn’t have that mother-son respect level. I wanted it to be that I spoke to my son once and he would listen, period, end of story. But Xavier was not listening the first, second or third time I told him to do something. I had to understand that that’s not quite how kids are.

Eventually the court sent me to a different kind of parenting program, a parent-child therapy program in the Bronx called Chances for Children that uses video to help parents see themselves. Each week, they took video of me playing with my son and then the therapist discussed it with me. At first I felt like, “Ugh, I don’t want to be here. It’ll just be a repeat of the last two classes.” But it was different. With the video, I got to see the problems between my son and me from a different point of view.

During our video sessions, Ms. Martha would have Xavier and me play on the carpet with different toys. In the middle of the session, she’d stop the tape to show me what she noticed. She said that it was good that I even wanted to play with my son, and that she could tell that we normally play with one another. She also noticed that when we were coloring, Xavier longed for my approval of his picture. Ms. Martha told me this meant Xavier cared about what I thought, which is a sign of a mother-child bond.

Ms. Martha also showed me how I was frustrating Xavier by moving too fast from toy to toy. I kept changing the toys because I was bored with them instead of waiting for him to finish. This would make Xavier upset. He would try to get the same toy again.

I thought Xavier was too young to understand playing. I wanted to teach him how to follow instructions so he could play with his toys how they were meant to be played with. I didn’t understand his way of playing, that it didn’t matter if he followed the instructions if he was enjoying himself.

It was hard to watch the first day’s video. When I saw myself pressure Xavier into playing with a new toy because I was tired of playing with the old one, I felt like I was being a bully, not a mom. But after that session, I felt amazed. Ms. Martha had already helped me understand why my son got frustrated when we played together; he was unable to finish tasks that he started. Martha told me it was OK if Xavier stayed on tasks a little longer than I preferred.

At first, when I tried to follow Ms. Martha’s advice at home, it was a disaster. Xavier took so much time to play that he didn’t want to stop to eat or take a bath or do anything that he wasn’t ready to do! At our next session, I told Ms. Martha that I could not just simply let him play as long as he wanted. We had things to do besides play!

She told me about the egg timer approach. I would set the egg timer to go off 10 minutes before I wanted Xavier to do a different task. The countdown helped Xavier understand that playtime was almost over.

At home, the egg timer approach didn’t work immediately, but eventually it worked so well that I just gave Xavier early warnings and we gave the egg timer a rest.

Listening to Each Other

From our video parenting sessions, I learned that Xavier needed me to be more patient with him and to hear him out. I also felt like he began to understand that when I gave him warnings that it was time to stop playing, he had to listen.

The biggest change was in my thinking. When my grandmother raised me, she acted like children should have no say-so, no thoughts, no feelings and, point blank, no voice. When Xavier was young, I found myself inhabited by my grandmother’s ghost. I treated Xavier the same way.

The video parenting helped me realize that kids have their own minds and have real feelings too. Now that I’ve acknowledged that children are human just like me, I can talk with them instead of demanding. When I first went to the video parenting, I just wanted to get Xavier to listen to me. From our experience, I learned that I needed to listen to him, too.