It was July 1997, on a hot, humid day. All the neighborhood children were outside. Teenagers were playing in the fire hydrant spray to coo 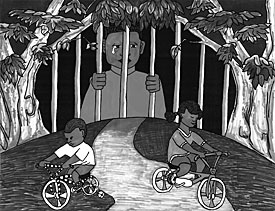 l off. Younger girls were jumping rope and boys were playing handball. A few young men were playing stickball in the street.

My birthday was approaching and I had gone out the day before and bought bikes for my two children, Raven and Shai. I always liked buying them presents on my birthday.

‘Doing It for the Family’

I grew up poor with seven brothers, four sisters, a caring beautiful mother and a drunk, abusive father. I vowed never to be like my father. As soon as I was old enough, I decided to buy me a gun and some drugs to sell. At 14, it seemed only logical to me that, so long as I had a gun, I would never be broke.

First I went on several unarmed robbery sprees, some of which were almost comical. Once I barely scraped by with $55 after a hand-to-hand tussle with a brawny older guy.

With my stick-up money and $50 chipped in by a friend, I bought a handgun and a couple grams of cocaine. Then, after a number of easier robberies, I had plenty of cocaine to sell. The money came fast and easy. I was living the high life.

Addicted to the Money

I thought of myself as a businessman. I bought a product wholesale and sold it retail at a profit. If I didn’t sell it, someone would. This was evident because of the demand for drugs in my neighborhood.

I also truly believed I was doing it for my family. I never thought for a minute that my behavior would lead to my separation from the family I loved.

But when I had enough money to give up dealing and go legit, I didn’t. Even though I had been arrested many times and most of my original partners were either dead or serving lengthy prison sentences, I did not want to stop dealing. I was addicted to the money and power, to seeing the look on people’s faces when I handed them presents and cash.

The neighborhood children would line up at the Mr. Softee truck and order what they want when I was around. Because the parents couldn’t afford it, I always paid for everybody’s Klondikes and King Cones.

A Day to Remember

On this day, the ice cream truck had come and gone. All of the children, and some of the parents, were smearing their faces with ice cream. I finished my Banana Boat, went upstairs and returned with a hot pink Barbie bicycle with training wheels.

Raven’s eyes lit up like a sparkler and she charged me like an out of control gypsy cab. She hugged my leg, jumped on the bike and took off with a bunch of neighborhood kids in hot pursuit.

Shai looked up at me confused: “What about me?” For him I had a black and yellow bumblebee bike. He hopped on so quickly, he nearly toppled over. I steadied him, but as he tried to take off, we both realized his feet couldn’t touch the pedals.

That afternoon, I just pushed him around, and after he went to bed, his uncle Mike and I readjusted the seat pole and the pedals. The next day, I felt on top of the world watching him and Raven race up and down the block, enjoying themselves.

But those days came to an end. Eventually the local police labeled me a menace to society, which, admittedly, I was. Soon I was targeted by many people—the police, other dealers and stick-up kids.

I thought I could protect myself and was outsmarting everyone, but my judgment had become cloudy. My future was being written by the police. Soon I got locked up for a murder that took place on a block I controlled. The police knew I either did it or allowed it to happen.

I refused to cooperate, not knowing the lengths the police and prosecutor would go to take me off the streets. Looking back, I am no longer mad at the people who orchestrated my demise. I realize that how the world perceived me was true. I was a menace.

Today, sitting in Sing Sing Correctional Facility, staring out the dirty windows at the Hudson River, I see how blind I was. I was hurting my children more than I was doing anything positive for them. I was a horrible role model for Shai. Now I am out of their lives.

Their mother relocated to Connecticut and I no longer see them as often as I’d like. I write to my children, but that’s not the same as being there.

In 2006, I saw them only twice. Raven is now 14 and Shai is 13. He made it clear that he felt abandoned by me. I missed out on their childhood years. By the time I am eligible to go home, Raven will be 28 and Shai 27, older than I was when I was arrested.

If I could do it all over again, I would raise my kids like my mother raised me: with more love and happiness than money and material things. I tried to do better than my father, to give my kids what I believed I was missing. But I feel I’ve failed as a father.

I pray that one day I can receive a second chance to connect with my children. I only hope my children can forgive me for what I did.

Sometimes now I look back on that day with the bicycles. My children were happy, their mother was happy, and I had contributed to that happiness. That’s a time I’ll always remember.