When my girlfriend told me that she was pregnant, I believed that the baby she was carrying wasn’t mine. I didn’t have confidence in our 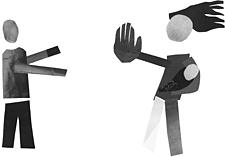 relationship. Sometimes she didn’t pay attention to me. I would say to her, “Come at 6 pm,” and she would come if she felt like it, but if not, she wouldn’t show. She almost never called me. It was me who called her all the time.

But when I went to see my daughter in the hospital I was very content and I swore before God that I would never leave my family. I helped my girlfriend with the baby and we had three good months together.

I was very happy and was thinking about moving in with my girl. But after I lost my job, things changed.

At first my girlfriend said it didn’t matter that I had nothing. I am poor and humble. I live in the Bronx with my mother. We arrived from the Dominican Republic six years ago.

But as time passed, we began to argue about money. She wanted me to give her all of my money, even though I could hardly afford to support myself. She became disillusioned with me, and I began to feel that she only wanted my money.

Four months after our daughter was born, my girlfriend began to want nothing to do with me.

I tried to make arrangements to see my daughter. I visited when her grandmother was caring for her. But the grandmother acted like she was too busy with the baby or the house, or as if she was bothered by my presence. Sometimes she didn’t talk to me or want me to talk.

When I saw my daughter’s mother, I started showing contempt and anger toward her because I was hurt that she wasn’t paying attention to me. I got tired of calling her and eventually I completely stopped.

Recently my daughter’s mother brought me to court for child support. I was upset. She didn’t need to do that. I am looking for work and had been trying to stay involved with my daughter.

The problem is that I don’t have much work experience and I don’t know how to do almost anything that could help me move forward. I don’t speak English. I didn’t finish school. Every Tuesday and Wednesday I go to an employment agency from 8:30 a.m. until 2 p.m. but I have not found anything.

I am starting to get depressed. Lately, I haven’t had the desire to do almost anything. I say to myself, “I don’t care if I find work. Nothing much matters to me.” I know that I have to be a little bit more responsible for myself and for my daughter, but sometimes I believe my destiny is written. I can’t change it.

Other times I tell myself, “With the help of God and my will, I will get ahead.” I would like for someone to help me open my eyes and show me a way to move forward.

Looking for a Way Out

A few months ago I joined the Bronx Fatherhood Program, a support group for young fathers, so I can learn more about children’s development and my rights as a father, and get support with staying connected to my daughter and help finding a job. I have learned a lot so far, especially about the care little children need because they are so delicate.

Last month, I went to court and filed a paternity petition because my daughter doesn’t have my last name and my name is not her birth certificate. That is the first step toward getting visits or shared custody.

But after I filed the petition, I decided not to continue with the case. I’m not sure why. Perhaps my depression is the reason why I don’t feel hopeful about being a father.

Still, I know that my daughter wants me and needs me. I have to find the strength to return to court. I need to regain my hope that I will find a way out of this complicated situation.