In my five years of dealing with my daughter’s father, he only put his hands on me once. For three months he had been out of work. I noticed him becoming more snappy and less excited about going out to eat, 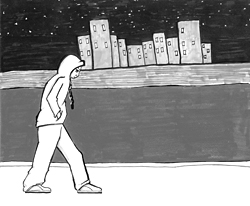 which we did every weekend night. That didn’t stop me from putting the pressure on him. One night he exploded and even started choking me. I stabbed him with a pen. He called the police. I left.

The very next morning he came knocking at my door, asking forgiveness, and I forgave him, but we never discussed what happened or where that anger came from. A week later, I watched him cry. Now this was a sign of weakness I had never seen in him. I held him and asked him, “What’s wrong?” I had to realize that his pride, ego and manhood were hurt because he was out of work and could no longer provide a lavish life for my children and me. He felt worthless.

It was amazing to me to realize that he only felt like a man when he had a job. When I understood the pressure he felt, I began to get the foods we liked from the fish market and mix him a piña colada at home, and I did my own hair and stopped getting my nails done.

Do all men feel this kind of pressure? For a new perspective, I spoke with Tim Nelson, a lecturer at Harvard’s Kennedy School of Government who collaborated on the book Doing the Best I Can. Nelson and his wife, Kathryn Edin, moved with their children to Camden, one of the poorest cities in the country, to learn about the experiences and attitudes of poor fathers.

Q: Why did you decide to write about these fathers?

A: My wife and her colleagues wrote a book called Promises I Can Keep about the struggles of low-income unmarried mothers in Philadelphia and Camden. After the book came out in 2005, they were often asked, “What about the fathers? What is their involvement in children’s lives?” There are a lot of stereotypes and misinformation about low-income fathers. This book is a corrective to that.

One stereotype is that these guys are just after sex, and when the girl comes up pregnant, they’re out of there. So we were surprised that, by and large, these guys really were excited to become fathers. Many had concerns about the responsibility and not having a good job, but they were also just really happy. They said, “I always wanted to have a child.”

This was surprising because these men were not living in the best circumstances. Many had dropped out of school, didn’t have a job, and some were using or dealing drugs. But a lot of them recognized that they were not on a path they wanted to be on and they saw their child as their reason to get things together.

Q: What challenges do these fathers face in turning their lives around?

A: When you look at statistics, you see that contact between low-income, unmarried fathers and their kids falls off dramatically within a few years. A study of “fragile families” has found that, by a child’s fifth birthday, only half of fathers are still involved—living with their children or seeing them several times a week. A lot of that has to do with the reality that these men were not as successful as they wanted to be in turning lives around.

Many of these fathers embraced the “new fatherhood,” which is about fathers having an emotional connection to their children: reading to them and playing with them, showing love and being there, not just providing the paycheck. But so much of men’s identities revolve around work, and it was much harder for these men to find and keep stable jobs than they’d imagined. At the end of the day, poor fathers had very little left over for their kids, especially if they were not living with the mothers, and that contributed to a sense of failure. If they didn’t even have money to take the kids to McDonald’s, they didn’t even go around because they felt they had nothing to give.

Drugs were a major problem. Men would get involved with dealing when they couldn’t make ends meet, and that often led to using. Men who are actively using often keep themselves separate from their children. They don’t want their kids to see them in a degraded state. If we can address substance abuse head on, that would change the landscape of fatherhood. We need to be asking, “What is driving these high levels of substance abuse? How can we work with guys in treatment to make contact with their kids and stay involved?”

Q: What leads men to drop out of their families?

A: What we saw is that poor fathers’ relationships with their children’s mothers were fragile. Before the pregnancy, these relationships were often very informal, or even random. The guy was seeing other women, or they’d only been together a very short time. Then they tried to get it together for the sake of the baby, like, “OK, we’re having a baby together. We’d better become a real couple.”

But once the couple got to the day-to-day routine of parenting, they discovered that they were not all that compatible. And after the baby came, mothers would often raise their expectations of the father. The stress and tension would often lead to blowouts—substance abuse, infidelity, violence and so on.

In the old days, families forced couples to stay together. In these families, though, the families were usually against the relationship. They’d say to the girl, “This guy is trifling, he has no job.” Or they’d say to the father, “How do you know this child’s yours?” Nobody was for this couple in the family or the community. It’s hard to sustain a bond under stress if it wasn’t strong to begin with and everyone is feeding into a split on both sides of the family.

Men underestimated the impact the break up would have on their relationships with their children. A lot of the mothers didn’t allow access to the child, or there was a lot of bitterness and tension when they did see each other. We really saw the fall off in father’s involvement when, soon after the break up, both parents had found new romantic attachments. There’s a tendency to cut off the whole relationship to make the new relationship work.

Q: What could help low-income fathers stay in their children’s lives?

A: We asked, “If you had something to say to the government about how to make life easier for men in your situation, what would you tell them?” Child support was the main one. Many states have very harsh child supports laws. In South Carolina, for instance, if you miss one payment, the police can come on your job and take you off in handcuffs, and you can serve jail time. They wanted to find a way for child support to be more flexible.

Fathers’ relationships with their children and children’s mothers also might not break down as much if these parents had more support around how to communicate, express feelings, and cope when you disagree. Some programs have shown that they can help people with these relational skills

We saw that when there were intermediaries between the mothers and fathers after the breakup, the father stayed involved with the child. Sometimes the mother’s sister or her mother helped the father see his children without having to deal with the bitterness of the breakup. It might help if the state or other organizations could play that role.

We don’t really have specific policy proposals in the book. The first hope is to show that men really do want to become fathers and be connected to their kids. We need to figure out how to partner with fathers so they can overcome their barriers.