I grew up experiencing many different kinds of abuse. When I was 12 I started taking medication to stabilize my emotions, but when I was 21 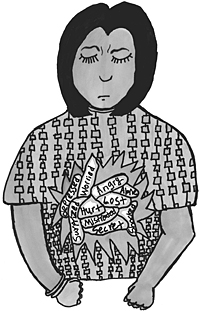 and married with three children, I tried to stop taking them. Then I felt distant, like I was in my own world, what I call Erica’s world, where it’s all about me and no one has feelings but me.

I was also afraid of having my family depend on me. I doubted myself as a mother and as a wife. I didn’t feel worthy of playing those roles, and I also felt like I didn’t matter anymore, like meeting the needs of my husband and children was more important than taking care of my own needs.

Like me, my husband, Michael, grew up in foster care. He copes by keeping his emotions inside. When Michael acted unemotional, it made me feel like he didn’t really love me. I began to think he was only with me because of the kids, and that if the situation were different he would have been gone.

So I lashed out at him. I blamed Michael for trapping me and for making me feel so empty, so lost and so unloved. I would start by saying mean, sarcastic things to him, like, “You’re fat,” You’re ugly,” “You’re a deadbeat,” “I should have never married you,” “You are my biggest regret.”

A part of me was really thinking, “I love you. You are the best I ever had.” Instead I said all the horrible things to him that I really felt about myself. I didn’t realize it at the time, but I wanted to make him angry. At least I would feel something from him.

My Husband, the Monster?

But Michael started giving me a taste of my own medicine, saying to me what I said to him. I just got angrier and angrier. Then I would throw things at him and hit him.

At first he would try to guard himself or move away. Sometimes he would try to ignore me and play his video games. But when I kept up my attack, he’d push me away or restrain me like they would have done if I were hospitalized. Then I would call the police and exaggerate everything Michael had done to make him seem like a monster. I was in so much pain and I was so angry that I felt like I needed to punish someone.

Eventually my therapist called child protective services on me. Soon after, I threw something at Michael and then I hit him. Almost reflexively, he hit me back and I fell into the closet. After he hit me, he came and held me and asked if I was OK. But I didn’t care. I called ACS and reported him, and they took our children away from us for two weeks. That was a wake-up call.

After that, I did start taking my medication again, and with the help of my therapist I began to calm down. Once I was calmer, we tried to explain to ACS what really happened, but it seemed like the caseworkers already had their minds made up. Michael was the perpetrator and I was the victim.
When we went to court, my lawyer, Michael’s lawyer, and our children’s lawyer all tried to explain that the fights only escalated when I was off my medication. But the judge must have thought we were trying to hide what was really going on. She said that domestic violence is domestic violence, and she ordered Michael to go to counseling for batterers and me to go to counseling for survivors.

Luckily, when the counselors in the program heard my story, they said I didn’t need to be in survivors’ counseling. I needed couples’ therapy. By then, ACS had also gotten to know us better. When my therapist offered to give us couples’ counseling, they agreed to make it part of our service plan.

In therapy I focused on the emotions underlying my abusive behavior. The therapist helped me understand that it was like I had split my personality in two. There was part of me that wanted to feel powerful, as if nothing in the world could hurt me, not even Michael, and so I would be abusive. But there was a part of me that felt powerless, and like I deserved to be abused. That’s the part that was trying to push Michael to his limit so that he would abuse me. I didn’t know how to feel alive and feel like me, to be neither an abuser nor a victim.

The therapist also helped Michael focus on the split way that he was seeing me. Sometimes Michael would see me as just evil and vindictive rather than accepting that I have mental health problems that I can’t always control. Other times Michael would feel like it was his fault that my emotions are so unstable. He would feel guilty and angry that he couldn’t fix me, when the truth is that I was like this long before I met him.

The therapist helped us accept that I have uncontrollable periods of unstable mood swings, and that at those moments, there is usually nothing Michael can do to help me but let the moods flow.

The therapist also helped us recognize the warning signs of a mood coming on. Often I’ll start by feeling sorry for myself. Michael calls it my sad poet mode. I’ll start saying, “Nobody loves me.” Then I’ll switch to being aggressive.

The therapist helped us figure out that, at those moments, we shouldn’t try to communicate, because then things just escalate. Instead, it’s time for a timeout. Now Michael will entertain the kids in one room, and I’ll go to another room to listen to music or be on Facebook. It gives me space to reflect on how I’m feeling. I tell myself, “This too shall pass.”

Sometimes our timeouts make me feel bad, like I have a disease that might contaminate the kids, and that I have to be quarantined in this one little area. But I also know that Michael is ready to talk to me whenever I’m ready. Before, Michael used to press me, “Let’s talk about it. Let’s work it out.” Now he just says, “When you’re ready, I’m here.” Sometimes I’ll even text him how I’m feeling so that I don’t feel so alone.

In some ways, it has hurt to go to counseling and face the hurt both Michael and I endure because I am emotionally unstable. But therapy has helped us understand that even if I can’t always control my mood swings, those mood swings don’t have to destroy our relationship.

Therapy has also helped us laugh out loud at how out of control we got when we weren’t listening to each other. Now when I’m getting moody and lashing out at Michael, sometimes he’ll say to me, “I know what you’re trying to do. You’re trying to get me angry so you can feel something from me.” Then instead of getting angry back, he’ll give me attention and make me laugh. That laughter helps us both calm down.