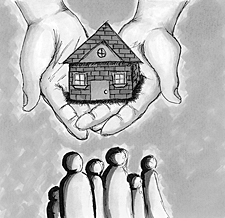 and reunify with their families. My husband found support there when we were going through our child welfare case.

Derek Silvers, who was the director of the program when my husband went there, told us that the majority of referrals from child welfare are for domestic violence. But, he says, what’s really going on in some of these situations is not clear cut. We asked him to tell us more about these cases.

Q: When men walk into your program with cases for domestic violence, what is the range of situations you see?

A: In a domestic violence class of 15, I’d say a good 7 to 10 of the men are perpetrators. They are clearly the batterers.

But other cases are more complicated.

To start, we have men who really need help with anger management, not domestic violence.

If you’ve had a bad day at work, and you hold in all your anger until you get home, you’re showing that you have excellent anger management skills. If you then take your pain out on the one person you feel you have power and control over, that’s domestic violence. But if there’s a man who one day is just so stressed, his partner pushes his buttons, and he loses control—he pushes her or says something very abusive—we think that man needs an anger management class, not a class for domestic violence.

In other cases, the violence and aggression appears to be a two-way street. We hear that the other partner threatened him or even started hitting. Still, that doesn’t mean the men shouldn’t be in the class. They can still improve how they deal with conflict and nurture their relationship.

Finally, some men are the victims. People say men can’t be abused by women. I totally disagree. A lot of men don’t report being victimized because they feel they might be shunned by their community. If they do strike back, they’re accused of being the batterer.

Q: Batterers often make excuses, deny, or blame the victim. How do you try to understand what’s really going on?

A: Many men have big problems with denial, minimizing, and blaming. Those are three of the biggest dynamics in domestic violence.

In our program, first we meet with the man and get his self-report. Then we speak to the attorney and the caseworker. Sometimes we have access to the child’s law guardian. There are often pictures and police reports, including past domestic incident reports. Sometimes we can find out what the therapist thinks.

We keep bringing all the information together and processing it with the father. We ask a lot of non-judgmental, open-ended questions. Like an onion, we keep peeling back the layers. Hopefully the support in class gives us an opportunity to get closer and closer to the truth.

Sometimes halfway through a six-month class a father eventually realizes: “What I did was abusive.” Sometimes, after three or four months, we get a picture of a father who wasn’t abusive. And sometimes, even after six months, we still really don’t know.

It’s hard for the system to figure out what’s going on. It’s also hard for men to trust the system. We tell them, “You have to get used to it. You no longer have the power and control.”

But the system could also do a better job not assuming all men are the same. Sometimes they even assume that I collude with fathers and minimize their responsibility, and that I’m anti-mom.

Q: What systemic problems do you see?

A: After our class, a good 40-50% of our guys want to try to repair their relationship but sometimes their partners haven’t done any services or found support. Then he comes back to the relationship with a fresh perspective, but she still has a lot of trauma. We need many more services for couples. What services that exist are generally not free, and the waiting lists are crazy.

There are also not enough programs for men, and the programs are often expensive—some charge up to $1300—while women’s support programs are often free. We should be able to offer resources for men that they can afford. We also need more programs in Spanish and programs aimed at men from the Caribbean.