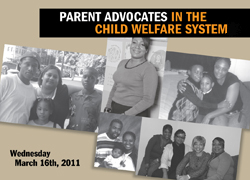 Below are highlights from the forum, facilitated by Andrew White, director of the New School’s Center for New York City Affairs. Presenter comments have been edited and condensed. To read Chapin Hall’s evaluation of the Initiative, click here. For a video of the forum, click here.

David Tobis. Fund for Social Change: The goals of the Initiative were to have more parents with child welfare experience working in foster care agencies helping families negotiate reunification, to help change the culture of agencies to be more aware of the needs and wishes of families, and to advocate for change in programs and policies that will better meet the needs of struggling families.

Teresa Bachiller, Child Welfare Organizing Project (CWOP): The parent advocates were trained at CWOP. This is a peer led curriculum that CWOP has run since 1999. Fifty percent of our parent participants go on to get jobs as parent advocates. Parents come in to CWOP seeking help with their cases. We see how passionate they feel and the difficulty they’re going through fighting the system. The parents want to become leaders because they don’t want to see another parent go through what they’ve gone through. Over six months, they learn how to navigate the child welfare and court systems, communicate effectively with caseworkers and handle themselves on the job. We use role plays based on our experiences advocating for ourselves. We also do a class on community organizing. We talk about who our officials are, how to build meaningful power, and how to do policymaking to make the system become more respectful to families. This is important—we translate our communication skills and knowledge of child welfare history into action.

Felicia Alleyne Davis, New Alternatives for Children: When my son was in foster care, I was hell on wheels. I was very difficult to work with. I gave my case planner a rough time. So it was amazing when I got that telephone call with the job offer to become a parent advocate. I immediately started to cry because they saw the hard work I did.

I understood coming in that there was going to be some resistance, because it’s new. Change is hard. I get that. Upper management received me with open arms. But when it came down to the supervisors and caseplanners, it was like a brick wall. They were like, “What exactly are you here to do? Are you here to side with the parents against us?” I had to bring my determination and steadfastness. I’d say, “No, I’m here to level out the playing field. I’m here to give parents a voice. I’m not here to put you down. I’m here to liftu the parent up. I’m here to make the process as smooth as possible.”

The first family-team conference I sat in on was actually with the case planner I had on my case. So that was rough. It was like, “Sit here, be seen and not heard.” I was fuming. The parent kept saying, “I need help, I need help.” When I tried to interject, I was shut down. I immediately went to upper management, and they put a stop to that. Having that support helped.

Has there been some change? Yes, there has. Now the case planners call me all the time. I’m needed. My caseload is so huge. Some days I feel like I need rollerskates to get all of the places I need to be. I sat in on a case review recently. I was thinking, “Oh my gosh, I’m sitting here with all of these people with alphabet soup after their names, and they’re asking my opinion?” That was such a high. Just a couple years ago, I was sitting on the other side of the table.

Anstiss Agnew, Forestdale Inc.: Support for the parent advocates begins with the director. I find myself spending a lot of time calling the supervisors and caseworkers and saying, “Did you think about bringing the parent advocate into this case?” I usually hear, “No, I didn’t think about that.” Changing culture takes a long time. Caseworkers come in to the job saying, “These parents are bad parents. They abused and neglected their kids.” They are skeptical of parents working in the system who have had their children taken away. But I think parent advocates are changing the culture of the agencies. Parent advocates go the distance. They don’t stop. One of our parent advocates made 10 visits in seven days to find and engage a parent. I’ve never seen anything like that. You just can’t match their work.

Sarah Wolf, Chapin Hall: One thing that came across in our research on the Initiative was the complexity of the parent advocate role. Anyone who works in child welfare knows it’s complex work. The parent advocates face some additional challenges. First, many of these folks have been out of the workforce for a long time and many are mothers, managing children at home. Second, the parent advocates are, on the one hand, peers to their clients, and on the other, agents of the foster care agency. That’s a fine line to toe. Third, anyone on the front lines in child welfare knows it’s emotional work. Parent advocates’ authenticity can also bring up vulnerability. The Initiative built in supports from the get-go because we knew the work could trigger memories and bring up emotional stress. We have to be there for parent advocates and protect them and support them in their work.

Jeremy Kohomban, Children’s Village: Despite our good intentions, and the personal commitment and honorable convictions that we bring to the work, foster care is incredibly intrusive. It’s isolating, and it’s inherently terrifying to the families we serve. Our mandates, our professional training, our personal identities and even the altruistic reasons that bring us to this work create a barrier between us and the people we serve. Parents in professional roles are the only consistent bridge that reduces the fear between professionals and parents and brings us closer.

Funding parent advocate positions is always difficult. But as organizational leaders we are constantly making choices about how we spend our limited financial resources. We have the power to invest in what we believe is important. Agency leaders, with the help of progressive foundations, can and should make that commitment. Many of us have already made that commitment, and we love it.

I am convinced that I will never know the true excitement of this work until our organizations are overflowing with parents and youth who are embedded in our day-to-day struggle. It’s not easy to do. It requires the commitment at the highest levels, it takes time, and it’s completely frustrating sometimes. But it’s possible that right now there’s a parent at the doorstep of a Children’s Village program who does not feel welcome. I know that with parent advocates, it becomes a little easier.