I felt extremely bad about myself as a parent when I came to prison. As a teenager I had really wanted a son. Once he was finally born, I was 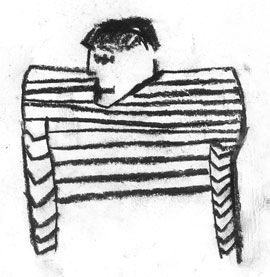 arrested and handed a long sentence. Now, 14 years later, I still regret every day that I am not being the parent that my son needed.

I have a few good memories of my son. When I held him, he would stop crying. I loved the way he drooled when I took his bottle out of his mouth. I also remember taking him to a carnival in Virginia, not long before I got locked up.

I was arrested when I was 20 and my son was just 4 months old.

I left him home with his mother that day. I was pulling out of the driveway with two friends in the car. I’d driven just a half of a block when the police came toward me in their car, head on. There were police in the car behind me, too.

When I stopped, they jumped out with their guns drawn. I pictured my son’s face at that moment. I had a really bad feeling.

I was sent to prison in February 1993. Soon his mother and I broke up, and she decided that it was best that my son and I not have a relationship while I was in prison. I begged to differ. I stayed persistent year after year, writing to her, attempting to establish a relationship with my son.

I never imagined that our separation would last for more than 14 years.

In prison I began to transform my life. I looked at my past mistakes and told myself that I was going to mature into a man and a responsible father. I dedicated myself to becoming educated and growing up so that, when given the opportunity, I could be that parent that my son deserved. I even took a parenting class, hoping that I could one day use what I learned.

Other prisoners often tell me that I have been handling my situation the right way. Their words of encouragement help me to persevere.

At last, my consistency in trying to communicate with my son paid off. Not long ago, my son’s mother relented and my son came for his first visit. It was the first time since he was an infant that I’d ever held or hugged my son.

‘Shocked to See You’

My first visit with my son was like an out of body experience. I was at work when the correctional officer called me and said, “You have a first time visitor. Do you want to go on the visit?” I was curious about who might be coming to see me for the first time after I’ve been locked up for more than14 years. “Of course I want my visit,” I said.

In the visiting room, the officer told me, “Your visitors are in Row 4 table 6.” I didn’t recognize the first man at the table, my son’s uncle.

Then I saw my son sitting with his head down on the table. Somehow, I recognized him immediately. My son is 6’ 2” and has short hair like me. His bone structure is so similar to mine. He has big dark brown eyes and a familiar blush.

I was extremely happy and stunned, but I still found the voice to say, “How’s everything with you, Kharon?”

“Kharon, how are you feeling right now?” I asked.

“Shocked to see you,” he said.

I told him, “Everything is going to be all right.”

I had so much I wanted to tell my son. I started from the beginning, from the time that I left him when he was only 4 months old. Time wouldn’t allow me to express everything that I wanted to say on that day; however. When I returned to my cell I wrote him a long letter elaborating on things that we didn’t have time to talk about.

I stayed up for most of that night thinking about our visit and how my son looks so much like me. I cried tears of joy for finally being able to look my son in the face and hug him after so many years. My heart was swollen with happiness.

On our second visit, Kharon and I were communicating like close friends. I was surprised that he seemed to talk to me about any and everything. He didn’t hold back.

He talked to me about girls—I couldn’t believe that! He also asked me where he got his height from, because he is taller than his mother and me. I couldn’t really answer that. Then he said, “You look just like me!” I said, “No, you look like me.”

At the end, I asked him to write all of his questions down. His letter made me so happy. He had quite a few questions for me, like: “What is your favorite color? What sports did you like to play when you were younger? Were you ever an A student in school? Were you ever a ladies’ man?” That last question threw me for a loop.

He said he didn’t want to O.D. with the questions but I didn’t mind. I’d been waiting for the opportunity to communicate and establish a relationship with my son. I was happy to see him opening up to me.

Since our first visit, I’ve been able to see my son once a month through The Osborne Association, an organization that helps incarcerated parents and their children. I’m feeling really good about how Kharon and I are getting to know each other. I can see us building a beautiful father and son relationship.

In parenting class, I learned about teenagers’ typical behaviors. I hope that what I learned will help me steer my son the right way as I get to know him more. I’m talking to Kharon a lot about growing up and taking on the responsibilities of adulthood, and about being able to respect himself first before thinking about others respecting him. I hope I can help him to understand that the decisions that he makes now will affect his future.

At the end of the parenting class, I had the privilege of inviting my son to my graduation. With Kharon in the audience, I gave a speech about my quest to establish a relationship with him. I was the happiest father on the planet that day. When I finished my speech, Kharon came up to the podium and gave me the biggest hug.

Now it has been more than nine months since my son’s first visit. I hope and pray that all goes well with my son while I continue my journey in prison, paying for the bad decisions that I made when I was not much older than Kharon is now.