When I was 12, drugs became my way to numb out all the ugly feelings I had inside from being molested and being ignored by my mother, who 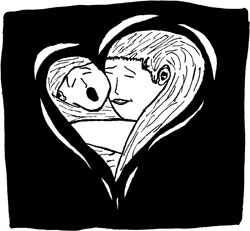 always put men ahead of her children. Eventually I tried meth and became addicted. Those painful childhood memories, the ones that no one talks about, disappeared with meth.

My addiction escalated when I was about 25 and caring for my four children under age 5. My husband, Francisco, and I lived in a neighborhood in Fresno, Calif., where at every fourth house they either used meth or sold it. Soon getting high became my escape from the smallest things—my baby crying, or a fight with Francisco.

I’m not sure what triggered me to start using so much. Thinking back, I see it may have been a number of things. Francisco was going to school, which left me home alone all day. I found caring for all of our children overwhelming and was jealous that Francisco was bettering his life. My role as a mother seemed insignificant.

I feared that I did not know how to be a mom. I did some things well. I always made sure my children were fed and bathed. We would read together and go to the park by our house. But I was really stressed out because I was afraid of making all the mistakes that my mother had made with me.

My addiction made my parenting worse. I was always frustrated with my children and Francisco. I would yell at my oldest, who was only 5, “Make Emiliano a bottle” or, “Take care of your brothers.” Other times I did what I had to do but with no emotion. I had become totally numb.

When I got pregnant again, I knew I needed to quit and I wanted to. I would tell myself, “This hit will be the last,” but kept using.

Francisco knew I had used meth socially, but I hid my addiction from him. Then we went to the hospital because I felt like I was going into labor. I hadn’t gotten prenatal care and didn’t know how far along I was, so the doctor did all sorts of tests. He told us that I had tested positive for meth.

I told Francisco, “There is no way. I haven’t touched the stuff.”

He just gave me a look of disappointment and said, “Babe, tell me, have you been smoking your stuff?”

“If you are, then you really don’t care about me or the kids. And what about the baby you’re carrying? If you test positive when you have her, we can lose all of our kids.”

The next night, I had bad contractions. I kept telling myself that I could make them stop. I was hoping for more time. But I gave birth that night.

At the hospital, CPS showed up and told us we couldn’t take the baby home. I felt ashamed and desperate. I had failed my family and myself. I feared that I would lose my children forever.

That day, I went to the nursery to hold my daughter, who was no longer allowed in my room. I just looked at her, feeling like I was the worst mother in the world. I had jeopardized my whole family, and for what?

That day, we went to a meeting at the CPS office. The workers helped Francisco understand how meth affects people and they suggested that I go to an outpatient treatment program so I could be with my family while I got help. But Francisco insisted I go to in-patient outside of our neighborhood, where he knew I would have an easier time breaking my habit.

I felt betrayed. I felt that he hated me. It really pissed me off that we were in a room full of people passing judgment on me, and I felt like I was a terrible mom, and my husband wasn’t backing me up. I felt it was Francisco’s job to protect me, even if that meant lying. I now realize that he was looking out for the welfare of our children and for me.

A Little Bit of Hope

Soon I was admitted to Westlake, where I stayed with my newborn daughter for six months.

The day I was admitted, I felt angry at myself, scared and guilty. I thought, “How did I let it get this far?” But I was still not ready to face reality. In my addiction, I had started to make a lot of empty promises, and even on the day I went to my program, I told my oldest son that I would be home in time to pick him up from school. I could picture the look on my little boys’ faces when Daddy went home that night and Mommy wasn’t with him. I had let them down again.

Still, I felt hopeful. Maybe, just maybe, if I gave this place a try, they could help me deal with all the raw emotions I carried inside. Then I could go home to my children a better mom.

In treatment, I met a lot of women that I could relate to. We connected because we’d been through similar experiences.

My counselor, Sharon, also helped me so much. Sharon was a tough woman who didn’t listen to any excuses. From the instant she looked at me, I felt that she got me. The loneliness that I had felt for so long began to lift in her presence.

Many times I went to Sharon’s office a mess, crying. She’d look at me and tell me, “It’s OK, we can fix it. Nothing is engraved in stone.” I learned to take one day at a time.

Through treatment, I got to connect with my family in a much different way than I had when I was high. Francisco and our children came to visit on Saturdays. I looked forward to our visits. I wanted to hear about everything they had been doing.

I would play with our kids, read to them, color and really enjoy our time. These were things I hadn’t done with my children before.

Being in the program with my daughter was a wonderful experience, too. I was able to enjoy taking care of her. We had a special class called Therapeutic Childcare that gave us time and support to bond with our babies.

The teacher, Ms. V., taught us little things that can set the foundation to connect with your children. For instance, I used to make a bottle, put my baby in the bed, prop up the bottle with a blanket, and that was that. She told me that propping the bottle can make a baby choke, get ear infections and have trouble learning to stop eating when she was full. Most important, feeding the baby in your arms is a way you show the baby you love and care about her.

I learned that children thrive when they have a daily schedule and when you’re consistent with them. Ms. V. told me that it’s important to get up early with my children, get them dressed and eat breakfast together. She also reminded me to hold my children, tell them I love them, praise them when they do something good, and stick with a punishment once I have set it.

The most valuable thing I learned was that I needed to set aside time to spend with my children to give them the attention they craved. I didn’t realize that children need attention in order to thrive.

Ms. V. gave me confidence that, despite my childhood, I could raise my children without neglecting them. I tried what she suggested and found that her guidance helped me build a stronger connection with all of my children.

Francisco and I reconnected during Family Group, where we could vent in a productive manner, and in one-on-one sessions with Sharon. She helped us to understand the roles we had played in each other’s lives and work out our differences without blame.

One Saturday near the end of my treatment, Francisco picked me up to take our children to the zoo. I was thrilled. I had always wanted to do that. I’ll never forget the expressions on our children’s faces while they looked at the animals. It felt incredible to me that we could experience such joy as a family.

Francisco grabbed my hand and looked at me and said, “I love you, babe.” On that day, I knew we were going to be OK. Even though I could not undo the past, we still had a future.

The day I returned home, I was overfilled with joy but also terrified. So many thoughts went through my head, like, “What if I can’t do it? What if my kids hate me? Am I going to be able to handle the stress without getting high?”

I had spent six months only with my daughter and in the safe, structured environment of the program. I feared that I wasn’t ready for the real world.

A big moment for me came about a month after I returned home. My caseworker, Geneva Thomas, came by for our weekly visit and my 4 year old started acting up. First he threw a ball at her. Immediately, I got on him and told him to stand in the corner. He told me no and continued to throw things.

I knew he was just trying to get attention, so I decided to ignore him. But Geneva saw that I was getting frustrated. “You need to deal with him,” she said.

I picked my son up and told him to stand in the corner. He started to shout. Then I was so embarrassed. I wanted to yell at him, “What the hell is wrong with you? Why are you acting like this?”

But that was the old me. I told myself, “That isn’t the kind of parent you want to be.” So I sat down with him in the corner. I told him we were going to sit there until we calmed down.

It felt like a good solution to me, but Geneva explained that I was punishing myself by sitting there with him. I felt so frustrated and confused. How was I supposed to handle him? Even though it took a lot of work, I finally got my son to stand in time-out by himself.

In the past, moments like this would have overwhelmed me and I would’ve gotten high. Not this time, though. I’m learning to be a sober mom.

Now it’s been 18 months since I came home from treatment. I feel good. I know how to build a foundation for my children. I am learning to handle their outbursts in a positive way and am reaching out to Francisco for support.

I’m so glad my social worker didn’t just throw me out into the world when I was done with treatment. She stood by me while I got adjusted. She also helped my family move into a new apartment and gave us referrals for furniture, clothing and food. Even after my case was closed, she was there if I had a problem or question.

Now, through a program called Exceptional Parents Unlimited, a child development expert comes and works with my children and me once a week. She brings games for the kids to play or comes up with projects for us to do together, like baking or making our own Christmas ornaments. It helps to strengthen the bond between me and my children.

Francisco and I are also closer than ever. We are able to communicate without fighting. I feel that we can make it through everything and our love will not fade.