Twelve years ago, when my son Caiseem was 5, he came home from 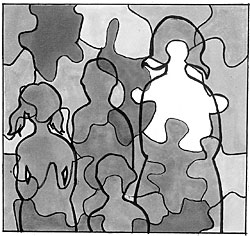 foster care, where he had been since birth. Caiseem is the youngest of my four children. I’ve always felt a strong connection with each one of my children, but with Caiseem, something was missing.

While he was in care, I would visit Caiseem at the agency, and during those visits I could feel that something wasn’t right. I felt that there was a wall between my baby and me. But I would put that feeling to the side and just try to be happy to see my baby.

Caiseem was a big old bundle of joy, especially when his father would pick him up. Then he would smile from ear to ear. But from the beginning, I didn’t feel like I got a positive response from him when I would pick him up. Instead, I felt like he was looking around for his father.

I wondered if Caiseem understood somehow that, when I was pregnant with him, I didn’t want him. During my pregnancy, I hoped God would take him away because I didn’t want to bring him into this world while I was using crack and homeless.

I asked God to forgive me for my negative thoughts, but I feared that Caiseem always felt unloved and unwanted, no matter how I tried to love him.

Looking back, I think I felt rejected by my son because I felt so guilty, and that there was a wall between us because he went into foster care right from the hospital, before we had time to connect.

How Can We Bond?

In the years after he came home, it always felt like Caiseem and I were not connecting. I constantly wondered what I could do to create a bond with my son. I knew I needed to reach him, because he was going through many issues at school and at home.

Caiseem would not talk much. He would stay out past curfew. He would steal. When questioned, he would lie. He would even steal from his brother and lie about it, or steal in school. I would make him give his allowance to pay for what he stole, but discipline didn’t solve the problem.

Finally, when Caiseem was 12, I thought, “He needs counseling.” Then I corrected myself: “No, we need counseling.” We needed someone to help us understand what the problem was.

I had been to counseling myself, not long after my children came home, because I was really stressed about taking care of my children and needed someone to talk to. My counselor helped me a lot. With her, I realized that counseling is mostly about listening to yourself and having someone whose responses can help you think from a new perspective. That counselor helped me hear myself.

This time I went with Caiseem. We were introduced to a really smart and understanding therapist at the Northside Center for Child Development in New York City. At first I wasn’t sure she could help us because she was younger than me and didn’t have children, but she really helped to bring us together.

Caiseem and I were very nervous at our first session. But after Ms. Gamble introduced herself, we started to relax. She had such a soft and comforting voice—you know, the kind that makes you feel like she cares.

Ms. Gamble gave us homework and games to help us open up and try new ways of relating.

During one of our sessions, Caiseem seemed embarrassed when I mentioned his lying and stealing. I felt the same way when he said, “Mom’s always yelling about stuff.” I knew I yelled but I didn’t understand the way it sounded to him.

Ms. Gamble gave us an assignment to do at home. Caiseem was to ask for what he wanted instead of stealing, and I was to congratulate Caiseem on his good work.

As for me, I was to talk instead of yelling, and when I did yell, Caiseem was to say, “Mom, do you know you’re yelling?” Then I should stop and count slowly from 10 backwards to one.

Sometimes I would apologize. Other times I found myself saying, “Yeah, I know I’m yelling, and that’s because I have to keep repeating myself.” We discussed this in the next session.

Other times we played a game where I would be Caiseem and he would be me.

Playing Caiseem, I would say things like, “Ma, can I go outside?”

“Go outside for what?” he’d say. I began to think, “Every time I ask for something, he’s yelling.” I really started feeling sad.

Other times, Caiseem, acting as me, would ask me if I took something. Caiseem has this puppy dog look he gives where he looks real cute. I’d give him that sad look and I wouldn’t say anything.

“Mommy, why you not answering me?” he’d ask, getting frustrated.

Caiseem was always afraid to ask for what he wanted, because I might say no. But a little while after that, he did stop stealing.

Those experiences really helped Caiseem and me understand each other’s perspectives and change our behaviors. But most of all, going to therapy together brought us closer.

I’ve noticed a big change in my son. Before he wouldn’t talk to me, but now he is eager to share and connect.

Some days after school, Caiseem will rush into my bedroom all excited and say, “Ma, you know what happened today? At school?”

I remember one time when I did not feel like talking with him. I was thinking, “Oh, no, Caiseem, I’m tired.”

Then he grabbed the remote and pressed pause, lying on the bed with his head on my shoulder, telling me about his incident at school, like a little boy.

I noticed that his hair was really fresh smelling, like the apple shampoo he uses, and as I listened and talked with him, I felt so happy and connected to my son. I can actually say we have bonded.