My son Eric, who is 11, has a learning disability that makes it hard for him to stay focused and attentive. His disability affects not only his 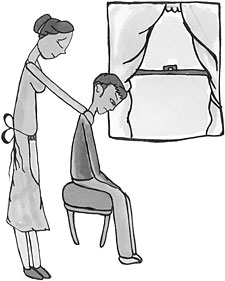 schoolwork but also our whole family.

Our family’s long journey to figure out the problem Eric was having began when he was around 8 years old. He had been in a special classes for bright kids in 2nd and 3rd grade, but then he began to struggle.

We were having a hard time at home getting Eric to complete homework and chores. He was a playful child and always wanted to be the center of attention, sometimes achieving it in a negative way. He wouldn’t finish his homework before starting to play, would occasionally be defiant and wouldn’t go to bed on time.

I tried to make sure Eric completed his homework, but I felt my husband and my younger son, Brian, weren’t helping me keep Eric on track. Brian would call Eric to play when I’d just said Eric needed to finish his homework first. My husband sometimes took the kids out to play before they completed their homework, as though it was every child’s right to play any time.

My efforts to improve Eric’s behavior put a huge strain on my family and on me. I got angry at my children when they didn’t follow the rules. My husband also felt I wasn’t attentive to him. I simply didn’t have the time or energy. I’d tell them all, “If Eric just did his homework first, I would be happy and he would do well!”

Soon we were all angry at each other. My husband and Brian felt that they were being punished because of Eric, and Eric was always angry at me. He’d even say, “I hate you!” I was sad and yet determined to get Eric the help he needed at home and school.

Eric’s troubles seemed serious to me. As I struggled to understand my son, I read many books about children with Attention Deficit Disorder (ADD), Bipolar Disorder and communication problems. I felt it was important to learn about any of the problems that Eric might be going through and to think through my own conclusions before getting a professional involved in our family. But the books did not help me come to any conclusions.

So I visited the Center for Family Life in Sunset Park, which I knew about because it’s in my neighborhood, and started to go to counseling with the children. (My husband couldn’t come because of his work schedule.)

When we met the counselor, Nicole, I explained that we needed help as a family. I made it clear that we were not seeking help only for Eric, but that we needed to explore our family’s patterns together.

Nicole was very supportive and my children were happy to speak with her. Nicole helped us address our difficulties in a few different ways. First she helped me implement a different way of getting my children to do chores. We made charts for the children to follow that listed their chores and responsibilities. That way it was clear what I expected from them.

Then we talked about some of the reasons that Eric, in particular, was having a hard time. Nicole felt that Eric was under too much pressure from his schoolwork. She also noticed that Eric felt bad about himself because he didn’t fit in at school and he was having trouble making friends. Eric had alienated other children by being too friendly—he didn’t know when to stop playing. So we tried different strategies to get Eric to feel good about his accomplishments.

Nicole suggested that we consider removing Eric from the gifted program and putting him in a less stressful environment. It was a tough decision, because he was already feeling bad about himself. But that was something he needed.

We also tried new ways to help him keep focused. I started to notice that Eric was having trouble in class and with friends because he often blurted out his first thoughts. Nicole worked with Eric to teach him to slow down and think before answering questions, and to learn not to be overconfident.

I also started to read books with him when I realized he was reading too quickly to absorb important information. I read short stories to Eric and found that taking turns reading was helpful in slowing him down. After we read out loud together, it was easier to discuss the story, and his understanding of his schoolwork improved.

My family and I were very happy to see some progress. We noticed Eric was thinking more about what he said, so he had more to feel good about, and that made everyone a little less stressed.

But after six months we had to stop seeing Nicole because she left the Center. We didn’t move on to a new counselor. Even though Eric was still struggling, he and Brian were happier and enjoying our time together with family.

But in July 2005, I visited the Center again because, once more, the kids were misbehaving and my husband and I were upset.

Our new social worker was named Andrea. She arranged for Eric to get a psychological evaluation to determine if he had ADD or some other disorder. The psychologist suggested that he be evaluated for verbal communication, so he saw a speech therapist and had his hearing and vision checked.

I also had him evaluated for what’s called a “central auditory processing disorder,” a problem that makes it difficult to block out background noise. My niece’s son had the disorder, and as it turned out, Eric also was diagnosed with it.

We found out that this disability makes it hard to focus on what one person is saying if there is any background noise. Obviously, if you don’t block out background noise very well, it’s hard to concentrate on the teacher’s voice in school. This diagnosis has gotten Eric the help he needed, and that’s helped our family life a lot.

The first step in treatment was for Eric to use an “FM unit” at school. That means the teacher wears a microphone on her shirt that transmits her voice straight to an earpiece that Eric wears. This enables him to hear only his teacher, drowning out the sound of other children and distractions. It has helped him thrive.

Eric also has seen two speech therapists. Part of the problem is that Eric has trouble keeping information in the proper sequence in his mind. The speech therapists help Eric to learn and practice sequencing and that’s enabled him to be more organized.

I am relieved that we finally got a correct diagnosis and happy to see Eric finally get the help he needs. Eric is relieved as well, but he has also felt confused and a little sad about having a disability.

The biggest change is in how Eric is treated in school. Before Eric was diagnosed, he had a terrible year. His teachers insisted that he simply had a discipline problem. He was in trouble all the time and ended up repeating 5th grade.

Now the teachers understand that Eric’s behavior was part of a disability, and they see that his behavior is improving now that he uses the FM unit.

We’ve had to teach Eric to ask the teachers for what he needs. When he first started using the FM unit, sometimes Eric would tell me, “Mom, the teacher didn’t use the FM unit today. She had it off all the time.”

I tried to help him understand that he needed to advocate for himself. “Eric, you must let her know that she doesn’t have it on, or else she won’t know,” I’d say. While Eric still believes his teacher picks on him, he has been able to speak up and ask for what he needs.

Eric is feeling better about himself because he’s able to do better in school and at home. I feel proud of Eric because he is working hard. He’s also becoming a more understanding, loving and tender child.

The help that Eric and our whole family have gotten has not solved everything. At home, my younger son still feels left out because he doesn’t get as much attention as Eric, and sometimes he can be pretty rebellious.

My husband and I try to keep both kids happy and treat them equally, even though Eric has turned out to have more needs than Brian. We need a great deal of patience.

I’m not feeling as stressed, frustrated and angry now that I better understand Eric’s behavior. I’m a happier mother. With Eric getting the help he needs at school, I am able to dedicate more time to my whole family.

But I think our family still needs support. My husband and I will soon begin counseling with Andrea so we can continue to work with each other and the kids in a positive way and so we can feel confident that Eric and Brian will grow up to become independent, responsible adults.