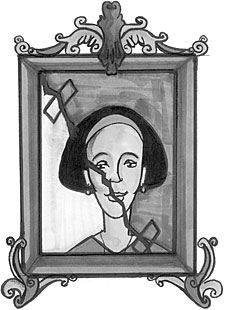 Children and Families. Seamen’s was the agency responsible for my youngest son and me when I ended up addicted to drugs and he ended up in foster care for two-and-a-half years.

My agency believed in me, and after I got my son back, it offered me what I think is the best job in the world: parent advocate. I helped parents whose children were in foster care, assisting them in finding support services, getting jobs, improving their parenting skills—whatever I could do to help them reunite with their children.

The job made me feel important and needed, like I made a difference in the world. It also helped me feel that my own world was stable and together for the first time in years.

For most of my life, I didn’t feel like I belonged anywhere. I was always on the outside looking in, a loner. My childhood was perilous at best. My father was an abusive alcoholic who would beat me with the crooked end of a cane for taking too much “meat” off a potato I was peeling, missing a dust bunny under the cabinet when I was cleaning, or leaving the TV on while I went down to get the mail. My mother was indifferent (at best) from years of abuse.

Whenever I could escape I did. My refuge was the public library. There was no yelling and screaming, people were around but didn’t bother me, and I could become someone else by reading a book. I was there so much that when my parents wanted me home they would just call there (and I knew they better be able to find me).

My other favorite place to escape was the local pool, when I could get permission to go. I cherished those moments when I could lose myself in the crowd, be surrounded by people without being noticed by anyone.

A Way to Survive

As an adult, even when I belonged to organizations like the PTA, I always felt like I was stuck at the edges, working hard and doing my best, involved, but never quite a part of the core. I don’t know if it was because I felt different from other people or they felt different from me.

My therapist (at my drug program) told me that blending in to a crowd without really joining a group was a survival skill that I developed to keep myself safe. It helped me to survive relatively intact to adulthood, and for years I was fine. I worked and raised three kids without any major problems. Then a whole lot of painful things happened and I ended up addicted to drugs, on the outside even of my own life.

As a parent advocate at Seamen’s, I felt safe and powerful in a way that I’d rarely felt before. I even started to base my identity on my job. I saw myself as a good person because I helped people. (Sometimes when you are recovering from an addiction, your perceptions are kind of warped. You start out thinking you are nothing and then when you come back to the “real world,” your self-worth is based on what you can accomplish, not just on being who you are.)

Then, in January 2002, after four years, I was laid off from my job due to the mayor’s budget cuts. Needless to say I was not happy. I felt like I’d let down the parents and children who were counting on me. I felt lost and worthless. I could also tell that my 11-year-old son, who had watched me struggle so hard for stability, was afraid I would wind up depressed and addicted again.

I was determined to find another great job so I called everyone I had “networked” with—those I had met at the many meetings I attended and committees I was a part of, who all told me what an asset I was. I let them know I was looking for employment, but not one person called me back. How’s that for making you feel good about yourself?

That’s when I got depressed. Who wouldn’t? I feared this setback could be permanent. From getting involved with drugs, I had an arrest record, so I wasn’t sure I could even get a job that could pay my bills. I especially doubted that I could get another job like the one I had, where I made a difference in the world and had found a second home.

Snapping Out of It

For nearly four months I hibernated. I collected unemployment and sat around watching television and let the world go by. I did not, however, turn to drugs. Not because I didn’t want to (because I sure did!) but because I knew I couldn’t use drugs and still be the mom my son needed.

One day my son said to me, “Are you too sad to come outside and play anymore?” That snapped me out of my depression. I realized that although I lost a job, I didn’t lose my identity. I was still a strong person and my son’s mother. If I let my emotions spiral any further out of control I would be in danger of losing him to ACS again.

I started a job search the very next day. I was a nervous wreck at first, but I learned to not take the words “you’re over qualified for this position” personally. I heard those words a lot! (I finally got one interviewer to tell me exactly what that meant: “It means that we know you’re going to find a better position and leave us flat down the line.”)

Over the next four years, I worked job after job, many of them only lasting a few months (the ones off the books) and a couple of them lasting a whole year. They weren’t save-the-world kinds of jobs, so I didn’t think they could help me feel better about myself, but in a different way, they did.

One job that was strangely rewarding was doing inventory at supermarkets and drugstores up and down the East Coast. A group of us counted items on shelves, getting in and out of a store as fast as possible. The people I worked with ranged from college grads to convicted felons, from age 19 to 68, all colors, all religions. We became a cohesive unit and (mostly) enjoyed working together.

I also auditioned to be the singer of a band called Mixed Emotions (which I am still a part of now)!

That wasn’t a perfect time. Because I had to travel from Virginia to Vermont for work, I wouldn’t be home to eat dinner with my son for up to 21 days in a row. (He stayed with his former foster mother during this time.) But belonging to two groups with such diverse sets of people gave me a sense of strength that I hadn’t felt since I’d left Seamen’s. I had people counting on me who I also had to trust enough to count on, and I had stability in my life once again.

Later on I got a job working with people who had developmental and physical disabilities. I felt humbled by the people I cared for, some of whom struggled to even speak one word. That really put my life into perspective for me. I thought, “How dare I think my life was so hard!”

During those years, I suffered a second serious setback. As if the job drama wasn’t enough, life still wasn’t done throwing my son and me a few curves.

About a year after I got laid off, the guy I had been with for eight years, who my son had come to think of as Dad—well, I caught him cheating on me with a crack dealer and using drugs!

I couldn’t believe what he did, especially since he knew how I had struggled to get clean and stay that way. I couldn’t get rid of him fast enough. I wasn’t letting anything take me back down the wrong path.

I was so angry at him and at myself. On some level I’d known he was using and cheating long before I caught him, but I didn’t want to admit it to myself.

At first, I missed him a lot. But once I got past the initial heartache, it didn’t really hurt as much as I’d feared. I think I missed a warm body next to me more than I really missed him.

Luckily, not much later I met the man of my dreams—or re-met him. We grew up together, lost touch as teens and met again at a clambake. This time I know it’s forever. Isn’t life funny? Sometimes I just marvel at how good life can be!

Through all these years, I made it a point to stop by Seamen’s and let everyone know that I wanted my job back as soon as they could get funding again. My friends thought I was crazy to ask for my job back, but I knew that I had been appreciated and that I made a difference in people’s lives. I felt sure that it was just a matter of time before I could return.

Well, lo and behold, two years ago I got a call from Seamen’s asking if I would like my old job back! My reply? A very joyous “Oh, hell yes!”

I still consider this the best job in the world, but there’s a difference in my attitude this time around—I love my job, but I no longer believe that I’d be lost without it. I realized I could get through hardships without relapsing, and could find a way to belong when I felt lost and alone.

These setbacks showed me that I’m a lot stronger emotionally than I feared I was. I grew as a person by being forced to take risks I was afraid I couldn’t survive.

Now I bring something to my job and my life I didn’t have before – a belief I can be useful not just to others, but in taking care of myself as well.

A Light at the End

Part of the credit goes to the man I love—he encourages me and tells me how proud he is of the changes I’ve made in my circumstances and my attitudes. The rest of the credit (he tells me) goes to me. I found the inner strength to overcome my problems and to become the person I wanted to be.

I also have to acknowledge the role my children played. They were unhappy with the way my attitude had been heading, and they are very proud of me now. Their constant faith in me goes a long way.

I still think I have the best job on earth. It’s a real joy to try to give parents hope when they can’t see any. I hope my recent ups and downs show them how lasting recovery can be. My life is proof that there is a light at the end of that very long tunnel called foster care, and I’m holding the flashlight to show them the way.