Last September, at a parent meeting at the Child Welfare Organizin 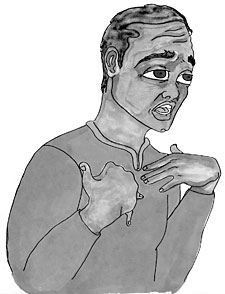 g Project (CWOP), I stood and spoke about my son Jacob, who is an infant in foster care. CWOP is an advocacy group for birth parents in New York City, and I attended the meeting after I was falsely accused of abusing Jacob and giving him Shaken Baby Syndrome. Outside of court, it was the first time I’d ever spoken in public about my case, and it was a hard thing for me to do. Even though I am falsely accused, the shame and stigma is a heavy load.

At the meeting, I explained that horrible court delays had contributed to my infant remaining in foster care for an entire year before the foster care system even gave me a chance to try to prove my innocence. I was glad I spoke up but I was still shaking five minutes later.

Not long after that meeting, I joined CWOP’s parent leader training program to learn more about how I could advocate for my son. I also heard that City Council Member Bill de Blasio, who had attended the parent meeting, wanted CWOP to meet with the commissioner of New York City’s Administration for Children’s Services (ACS). The council member wanted straight answers about why many parents like me were waiting months to have their cases heard in court.

Soon I told my story before Commissioner John Mattingly and other ACS officials. I hoped ACS leaders would be embarrassed by the way the agency handled my case and would help me get Jacob home, but after that meeting, nothing about my case changed.

After that, Council Member de Blasio held a public hearing at City Hall on the backload of cases in family court. The meeting was held on the one-year anniversary of the tragic death of Nixzmary Brown, a child whose brutal murder led to a sharp rise in the number of abuse reports and family court cases. Incidentally, it was also the one-year anniversary of ACS taking Jacob into custody from his hospital bed.

I thought it was worth testifying because it sickens me that babies and children are kept from their families because there is no due process. The system felt it could say to me, “Well, Mr. Pratt, it’s so early in the case…” when after nine months the system’s lawyers still had not proven that my son was at risk if he returned home.

Preparing my testimony, I realized that Jacob and I could come to represent the face of an overloaded court system. I thought that if more people understood how much my family has suffered, they would require the family court to move more quickly to spare other families from suffering.

On January 11, 2007, I read my testimony. After thanking everyone for the opportunity to speak, I explained the basics of my case:

“Our son Jacob was born October 12, 2005. Jacob’s delivery was traumatic. I almost lost both Jacob and his mother.

“When Jacob was delivered, he was not breathing. The umbilical cord was wrapped around his neck and he needed to be resuscitated. After, his heart rate was less than 60 beats per minute. Jacob was hospitalized for 10 days. For some reason, the hospital only stated he was hospitalized for jaundice. Later, when Jacob had other problems and we had to return to the hospital, the doctors did not have all the information they needed.

“In the month after Jacob was born, his head grew at an unusual rate, but the pediatrician never disclosed to us that Jacob’s head size should never have increased so much within the first few weeks of his life, so we did not know that Jacob’s health problems continued.

“On Christmas Day of 2005, Jacob’s legs and arms started twitching. When we could not reach Jacob’s pediatrician, we decided to take him to the emergency room. We later learned that Jacob was having seizures.

“The doctor in the ER said that although Jacob had no fractures, no bruises, no retinal hemorrhages, she suspected Shaken Baby Syndrome, or the new term, non-accidental trauma. In other words, she suspected that we had done this to our child.

“Two days later, a second doctor, at Columbia Presbyterian Hospital where Jacob had been transferred, wondered in her notes whether she did the right thing by categorizing Jacob’s condition as Shaken Baby Syndrome. (We later obtained her notes from the hospital.) But on January 11, 2006, while still in the hospital, Jacob was remanded to foster care.

“Since Jacob has been in foster care, we have been able to visit only two times per week for two hours per visit. Since August 2006 we’ve also been granted one community visit of four hours per month. Jacob’s mother and I have never missed a visit. We also have not missed one of Jacob’s doctor’s appointments—he averages four a month.

“Since Jacob has gone into foster care, he has not received proper care. For instance, in the first two months of foster care, Jacob was being transported to and from visits without a car seat—and he was only 3 months old! That is illegal, not to mention that Jacob had just received head surgery.

Also, Jacob’s Early Intervention Therapy was not scheduled or started until we reported this to ACS, despite numerous inquiries to the social worker at his agency. We also had to obtain a court order for ACS to allow the agency to present Jacob to a specialist that we found (and paid for) because for nine weeks we and the foster care mother complained about Jacob’s congestion without anything being done.

“In one year, Jacob has also been in three foster homes. We are extremely worried about his multiple moves and his current foster mother. On three occasions she brought Jacob to our visit without food, diapers, or his asthma medicine. She also has a hernia and is unable to lift Jacob. But instead of removing Jacob from this home, the ACS decided to send in a home health aide for eight hours a day. Frankly I have been very disappointed with the consistently poor behavior of the agency.”

A Year of Waiting

That was the background I gave the committee. Then I spoke directly about our experiences with delays in family court, which continue to keep Jacob in care:

“After ACS remanded Jacob to foster care on January 11, 2006, a date was set for a Fact Finding Hearing (to determine whether Jacob should remain in care). It was set for July 22, 2006, six months after his removal.

“We were anxious to get our day in court to prove our innocence and get Jacob back. During the six months that we waited, we complied with our service plan. We received CPR Certification, Parenting Children with Special Needs Certification, individual counseling, and, upon our urging, additional medical training.

“Then our hearing date got pushed back from July 2006 to January 2007—a full year from when Jacob went into care! The Legal Department of ACS in Brooklyn told us that they had lost five attorneys at one time, including our attorney. Due to this loss, 700 cases had to be shared by the remaining attorneys and trial dates were rescheduled. We were separated from our son for an entire year simply because of court delays.

“Because we didn’t feel we should have to—or could—wait a year for Jacob to come home, we asked for a special hearing to return Jacob home until the Fact Finding Hearing. After reviewing our medical evidence and hearing all we had done for Jacob since he went into care, the judge ruled on August 8, 2006, that Jacob could come home on August 15.

“But our joy was very short lived. On August 10, 2006, ACS filed for and received a stay of the judge’s ruling (meaning they asked that it not be enforced) and filed an appeal. That meant that Jacob would have to stay in foster care at least until the appeal was heard.

“We were heartbroken and, financially, we were exhausted. To date, we have spent all of our savings on lawyers, medical experts, and medical record fees exceeding $20,000. Now we have a new trial scheduled: one day in January and two days in February, and then the dates jump to May 2007 and June 2007. Who knows how long it will be until Jacob comes home. Was it really in his best interest for ACS to appeal the judge’s ruling that he could come home? Is it really in Jacob’s best interest to be in foster care?”

At the end of my testimony, I urged the City Council to make sure that these delays don’t damage other families. I also called on the city to allocate more funding to provide quality legal representation for parents early in their cases. “I implore this committee to seriously consider all the families being held hostage by the conditions of Family Court, and an unreasonably indifferent ACS,” I stated.

Finally, I added, “Thank you again for the opportunity to be heard!”

I received many blessings from testifying. I was introduced to both attorneys and social service program directors who offered their help. I feel lucky that renowned lawyer Carolyn Kubitscek will be arguing our case in appeals court.

But after that hearing, nothing changed for my family. Our court dates were spaced months and months apart.

Still Waiting for the Court

This time I told the council: “Since Dec. 25, 2005 we have not shared a single Christmas, Kwanza, Thanksgiving, Mother’s Day, Father’s day or birthday with Jacob, alone or unsupervised.”

I spoke with more anger this time, saying, “Being that Jacob’s mother and I had no previous knowledge of family court, we assumed that we would be given the benefit of the doubt, or at least that we would have our day in court. We felt assured because we are both college-educated, registered voters, active in our community, and have never had any problems with domestic violence, drugs, or alcohol. However, our case never started until after Jacob was in custody for more than a year.

“At this point, ACS’ side of the case has rested. According to the timeline, our side will not rest until mid-2009. Jacob’s lawyer joined with our lawyer in petitioning the judge to immediately send Jacob home. We are awaiting a decision.

“It’s totally disheartening to be back here another year later. All that has happened is that our lawyers are extremely frustrated and Jacob’s mother and I are now separated. Jacob is talking, walking, playing—basically being a 2 year old. He starts to cry at the end of the supervised visits.

“I sit here representing all parents and child involved in the New York City family courts. I urge all of you on the City Council to pressure and persuade the legislature to fund more judges.”

Again, I hope my testimony will make a difference, for my child and all other families.

In the past year, the way the agency treats my family has improved. We are fortunate to have a new social worker and director assigned to our case, and they both have been a blessing. Although we are in a horrible situation, they have agreed that we still must be allowed try to have a family life, and they have consistently respected our decisions as parents planning for Jacob.

But I am furious that my son has been in foster care all this time because of court delays. In only two years, he has lived in six different homes. I continue to visit him, to love him, and to fight for him.

Lawrence’s testimony was condensed in this story.