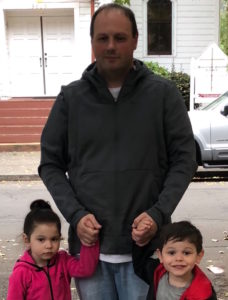 Now McClard works as a peer mentor at a family service agency in Portland, Oregon. He spoke to Rise about how his mentor, Tim, helped him get sober and become a peer mentor to other fathers in the child welfare system.

From the very beginning of my case I was in fix-it mode. I wanted to go 100 miles per hour in the right direction. I was fortunate to get probation, so I wanted things to change in a hurry. Everything was a checklist to me; my mentality was check, check, check, get everything done.

I thought I could do it all by myself.

My fix-it mode mentality was good motivation, but I was going too fast. Substance abuse recovery doesn’t work that way. That mentality can be dangerous to recovery.

Tim was assigned to be my mentor when I was 5 months into recovery. He showed me how to slow down and utilize the people in my life—my probation officer; my caseworker, who was wonderful; and the parents in my support groups. He connected me to the right people and services.

Tim was an active mentor on my case for about three months. Then we’d see each other at the support group and kept in casual contact—a phone call or a text every few weeks, checking in.

He taught me, by example, that I could be both a recovering addict and a good dad. He helped me see that the choices I made and my chemical dependency don’t define the person that I am.

I realized that, like Tim, I wanted to help other dads have a voice and the ability to overcome challenges and still be good parents.

In Portland we have a Father Advisory Board, a group that advises local child welfare on improving policy, perception and procedures specifically for dads.

We also have a Parents Advisory Council, which meets with the leaders of child welfare and human services throughout our state to provide information about what’s happening to parents in our communities. It tries to bridge that gap between child welfare leadership and the ground level.

Tim saw that I wanted to get involved and he referred me to the Father Advisory Board. A week after my case closed, I interviewed to join, and they welcomed me. Then I joined the Parents Advisory Council. I connected to parent mentors from around the state and I eventually applied and started working as a mentor at a family service agency.

Now I see myself in so many of the dads that I support. Like me, they just want to get through that checklist and get CPS out of their life as soon as possible. I help to ensure that they are successful long-term.

The Right Services to Meet Needs

One of the most frustrating challenges is the lack of services for dads in our state, especially affordable housing. It’s the biggest barrier that keeps families separated.

Dads going to treatment also don’t have the opportunity to take their children with them the same way a mom would. There are about 76 treatment beds in the metro area where a mother can go with her child to get clean, and only two for dads.

It’s hard to see parents that are doing really well and they just don’t have that last piece—housing. I would like to see that change.