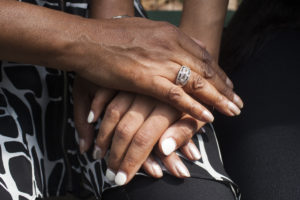 The mother shook her head in disagreement but waited until the CPS worker had finished talking. Then I said that I had seen her shaking her head and asked if she could describe what had happened.

She admitted what no one had known—that she’d had some domestic violence issues with her youngest son’s father. Because of that, she started homeschooling her oldest son to keep him safe, but the school called in a report on her for educational neglect.

When CPS sent her to have a psychiatric evaluation, she’d broken down. That’s when they admitted her to the hospital and placed her children in care.

She looked me in my eyes and said, “I love my kids and I will get them back.” Then she began to cry.

Maybe in other situations, telling us her problems with domestic violence could have made it harder for her to bring her children home. But in this case, the information meant we were able to make a safety plan with her—and return her children to her in five weeks.

LACK OF TRUST, LACK OF PROGRESS

That kind of openness is rare. Instead, I hear parents say all the time: “I don’t trust my worker,” while parent attorneys tell their clients, “Only tell them what you have to,” or, “Don’t admit to anything or it will be used against you.”

On the one hand, that attitude makes sense. It’s a risk being honest with a worker when you don’t know if what you share will extend the time your children stay in care. Other times, parents hide their struggles because they’re just not ready or able to do what they have to do to bring their children home. They feel ashamed and afraid of admitting how much they’re struggling.

But I also see the risks of not being honest. When case planners only learn important information about a client a year into the case, and then have to make a referral for an issue they never knew about, it’s almost like starting the case all over. It’s like getting to third base and having to go back to first.

The barriers to honesty make it difficult for parents and workers to make progress.

Back when I was a case planner, a parent called me who had not visited her children in two weeks. On the phone, she told me she’d fallen down a flight of stairs and that’s why she’d missed the visits.

I felt an obligation to ask if she was OK but I was also skeptical about her story because she’d already reported several times that she’d hurt herself to avoid random drug screenings. When she did come into the office, her test was usually positive.

I also felt upset. I knew this mother had the ability to really care for her children.

When she came for visits, her children’s faces would light up. She’d open her arms and welcome all of their hugs at once. Only her youngest daughter, 4, would stay close to the foster mother. For her, mom would get down on her knees to be eye to eye and ask for a hug.

She would ask her children how school was, tell them that she loved them and speak about positive memories. They would eat, play games, play music, dance and laugh.

PAIN BEHIND THE LIES

But her children had also been in care for almost two years.

So I said, “I know when you get injured you must care for yourself first, but it would help to let us know in the morning when you won’t be arriving so that the children don’t travel all this way just to not see their mommy. It’s di cult for them and they look sad.”

She said, “I know,” in a low tone. Then she told me she had been feeling depressed, that she didn’t want to leave her house. I knew dealing with depression had been di cult for her in the past.

But I also thought she might be staying away because she’d been using drugs.

If she had been honest about it, I would have encouraged her to visit anyway. If it were up to me, I would have put an in-house program in place so that she and her children could be reunited while she worked on her addiction and mental health.

But the truth is that case planners don’t have ultimate control over the consequences when a parent chooses to be honest. Supervisors make decisions, while judges make the ultimate decisions.

In order to support families, those of us working in child welfare need to figure out how to make it safer for parents to be honest.

Case planners could start by explaining to parents the risks and bene ts of being honest from the first face-to-face contact. If we did this, parents might be better able to build a relationship with us.

I also think everyone in the system needs to work together to reward parents for being honest. We need to nd ways to communicate to parents that if they fail or fall, they can get up and try again.