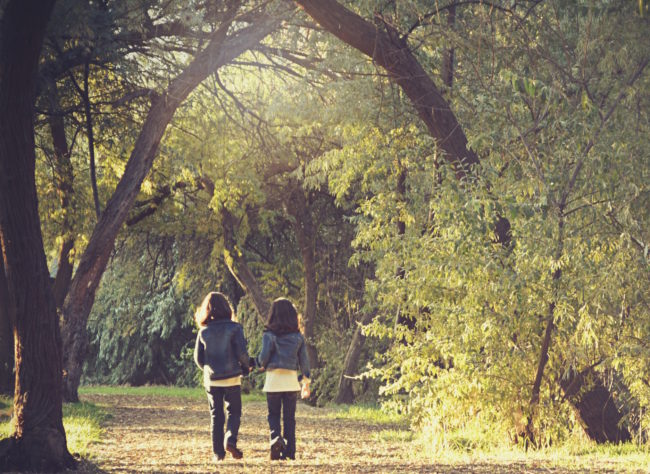 I went into a shelter after my daughter was born, but a few months later my mother asked me to move in with her. It felt good. My mom had always been emotionally cut off from me. She placed me in foster care at 14 because she couldn’t handle me acting up, cutting class and staying out late. She eventually got me diagnosed with bipolar disorder.

Still, I was grateful to see how much my mom loved her granddaughter.

Things changed when my daughter was 18 months and I started a new relationship and quickly got pregnant. My mother and I argued; she told me to have an abortion. I packed up my baby and went to my boyfriend’s place. Then my mother told CPS that I was with my daughter and without medication while dealing with a crippling illness, and my daughter was taken from me.

Shortly after that, my boyfriend became physically abusive. I lived in terror for my entire pregnancy— I didn’t have anywhere else to go and I believed that he loved me.

I became very depressed, stopped going to therapy and often missed visits with my daughter.

I was allowed to take my second daughter home when she was born—with the understanding that I would be living in a shelter and staying away from my boyfriend. I didn’t do that, and shortly after I gave birth, my boyfriend and I argued and he cut my ear open with a knife and threatened to kill us all.

The court said I was putting my baby in imminent danger, and she was removed as well.

I felt worthless for losing my children. I was in such a dark place.

DESERTED IN THE DARK

When I’d met my first caseworker, I was nervous, but she seemed genuinely concerned.

By the time my second daughter entered foster care, my worker had left the agency. I hoped that her replacement would be as caring, but she talked to me like I was too young and dumb to take care of my kids. She made me feel low for being the victim of domestic violence, but she never referred me to DV counseling or a shelter for battered women.

Months later, I had another worker. She referred me to DV counseling, but she also made me feel ashamed for being stuck in the relationship.

It was hard to make any progress. As time passed the agency tacked on new services, but they were always the same. I completed a parenting class six times and Parenting Journey three times.

But none of those services addressed my deeper issues— instead of bipolar, I had been newly diagnosed with PTSD and anxiety due to being thrown into foster care and the trauma I suffered there.

When I went and found my own trauma-focused therapy, my worker said I wasn’t complying because it didn’t address bipolar disorder.

I sank deeper into the dark. Some days I just couldn’t get out of bed.

LIFTED UP AND BROKEN DOWN

Things began looking up a year later when I started dating the man who is now my husband. He celebrated my successes and came with me to visits. He loved the girls and wanted to be a family, so we moved into the shelter together.

When I had my son, we were able to raise him together for two years without incident, and I attended workshops on co-parenting with an abusive ex and on self-care. Yet my daughters remained in foster care.

Then I got pregnant again.

My pregnancy was high-risk. I suffered from diabetes and edema (swelling). I was put on bed rest and didn’t do services or visit my kids for most of the pregnancy.

I also was smoking weed at times.

When my daughter was born, the hospital found THC in my system and she was taken from me. The next day, a worker went by my place and said that I didn’t have enough food and my house was unkempt. She removed my son.

In February 2018, five years into my case, the agency filed to terminate my rights to my oldest daughters and stopped me from seeing them. They are now 7 and 5, and are being freed for adoption in June. It kills me that I can’t see them until they’re 18.

But I’m trying to stay positive for my younger kids. I have a new agency, and it’s been different. They’ve understood that the inconsistencies in my life come from the trauma I’ve suffered.

My new worker helped me to tailor my service plan to what’s going on in my life and set clear steps. She printed it out and attached resources that she felt might benefit me.

When I let an ex back into my life and he hurt me, she didn’t judge me. She helped me set a new path and nd comprehensive DV counseling that helped me to see that he was manipulating me with money and the promise of love. I learned to recognize the tactics abusers use to get you to stay.

It feels good to have an agency that treats me as a partner.

My son and youngest daughter are 3 and 1 now. I see them twice a week, sometimes more. I finally have an apartment and it looks like we are closer than ever to reunification. Still, I get upset with myself because if I had pushed as hard as I do now, believed in myself and had people who believed in me, I know my older daughters would be coming home, too.