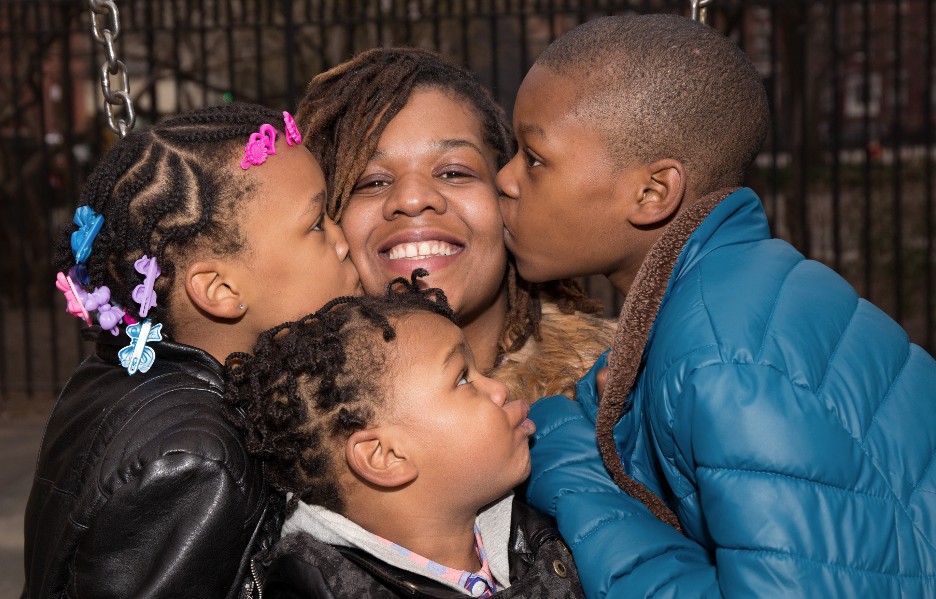 Reunified for life: Sharkkarah and her kids create new memories after years of separation

I was so ready for them to come back to me.

It was the first Christmas we’d spent together in two years, so it was special to us. I was lucky enough to have money to buy them gifts and make a nice dinner like we used to do every Christmas.

I wanted my kids to feel like we were a family again.

CHRISTMAS PAST AND PRESENT

Before my daughter and son went into care we would normally decorate the tree and watch movies with friends and family, listen to music, play with toys together, and of course, we all ate dinner together.

But this year was different because we lived in a family shelter. We could not have visitors and no Christmas trees were allowed. It changed the way we celebrated.

On Christmas morning, my kids came to me after opening up their gifts and asked where my gifts were. My eyes began to water. I told them that they were my gifts and I didn’t need anything else.

It’s true that my kids bring me joy, and knowing that they’re happy just being in my company makes me happy. But in the months after reunification, we also had to adapt to the new routine. At times it was hard for us all.

In October, when ACS had told me that my kids would come home in December, I did not feel confident about the trial discharge succeeding. I still had terms that I had to follow in order to keep my kids with me. I felt a lot of fear and worry that they might go back into care.

I also still had some of the problems that caused them to go into care, like not having stable housing, which has been a major struggle throughout my life.

I asked myself, “Can I really take care of my family?”

But my caseworker was really determined to advocate for my family to be reunited. I immediately started working with my lawyer and the housing worker at the foster care agency to apply for emergency housing.

A month later they found an apartment and I accepted it. But I still had to wait for it to be remodeled. My kids and I stayed in the family shelter for three weeks waiting on our new home.

During that time, I continued to take my children to the schools their foster parents put them in, which were in two different locations. The school hours were the same for drop-off and pick-up, so I couldn’t get them both to school on time. That added stress.

My kids also would have tantrums because they did not know how to talk to me about how they were feeling. At times, the tantrums really stressed me and made me worry about whether I could really take care of them.

But with my therapist’s help, I was able to be strong for my kids and communicate better by being more understanding, patient and consistent. My therapist also helped me find counseling for my children.

We worked as a family to heal and to find ways to create happy memories together after being separated for so many years. We watched movies, listened to music, danced, colored, and played board games that we loved.

Now, we make an effort to tell each other we love one another every day. Even if we feel like it’s already known, it feels good to be reminded.

On January 10, I picked up the keys and signed my lease. I was so happy that my family would finally have the stability we needed. My kids were happy to know that it would not be another shelter, but a safe place for our family. (We had been homeless for years.)

I had a proud mom moment knowing I could relieve some of my kids’ worries.

The agency helped me with the process and made sure that I had furniture in the apartment when I moved in, which really helped me out, since I was not working at the time and was a single parent.

Before my kids went into foster care, I never really enjoyed waking up early and taking them to school. But once we were in our permanent home and they were both going to the same school, it was so much joy to be able to set a routine for us and stick to it.

The walks to school were so exciting for us just because we were together. We would sometimes walk through the park and play on the swings. I will forever cherish those moments.

I never really was an affectionate person but I really wanted things to be different, so I showed my kids I loved them by hugging and kissing them and telling them I loved them every night before bed and every morning before school.

Last week, I received my final discharge papers. I feel free to move on with my family knowing there is no shadow of ACS in the darkness holding us back. When you feel powerless like I felt throughout my case, being able to feel like you control your life again and can be confident about making choices for your family makes you feel like you can finally live again.

I have wanted to show my kids we could have a better life after foster care and living in shelters. My major accomplishment throughout this case was to make it through the trial discharge and prove to myself and to my kids that foster care would be over and we can start again.