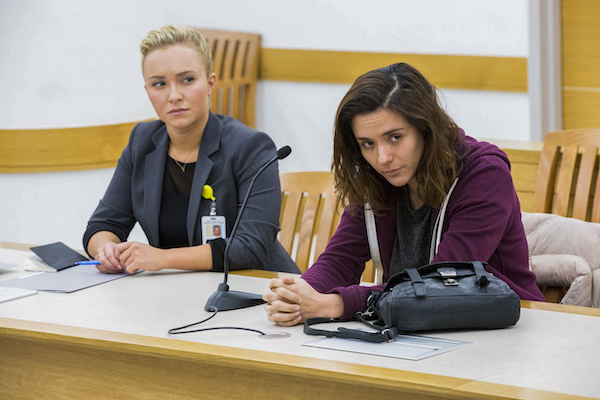 This Saturday, the film Custody by director James Lapine will air on Lifetime at 8pm EST. Starring Viola Davis, Hayden Panettiere and Catalina Sandino Moreno, the film explores the professional conflicts and personal dramas of a mother, a lawyer, a caseworker and a judge as a case of suspected abuse makes its way through the family court system.

In the background is the recent death of another child known to the system. The aftershocks of that death impact in subtle and not-so-subtle ways the case at the center of the film.

We spoke with Lapine about the film and about the time he spent in Manhattan Family Court researching it.

Q: Why did you make this film?

Lapine: I had an acquaintance that was a family court judge. She invited me to come down to the court for a day. I got completely fascinated with the world and the many stories that passed before her. So I came back over and over again. I spent time chatting with all the people there and getting their points of view.

I ended up writing a screenplay about it. I wrote it many years ago but I couldn’t get anyone interested in it, and it went into a drawer. It’s not a subject matter that’s attractive to many people in the entertainment industry. Then I had the idea of sending it to Viola. She’s the one who made it happen.

Q: What did you learn in the time you spent in family court?

Lapine: I learned that for some people who come before the court, it’s like falling down a rabbit hole. People fall down it and they have a very hard time getting out. It’s hard to be a good parent no matter what. A person in the same situation who has money and is more middle class may have a very different result.

I also wanted to make it clear that abuse is not necessarily about people’s socio-economic position in the world; people with money are damaged by abuse as well. Family court felt to me very much like a place where people went to work because they had some personal reason to be there. Maybe I’m reading too much into it. But the judge who brought me there had a father who left the family. It touched me very much to think that the people working there were also trying to figure out their own lives.

I learned that it’s an imperfect system, no question about it. I felt that decisions that affect people’s lives in such profound ways were made quickly without real thoroughness. These are really life changing decisions, and the fact that people are so overloaded with work seemed incredible.

The other thing that fascinated me was how personal it all was. How do you keep the personal connection alongside the professional one? If I were working there that would be a real challenge. I couldn’t really shake the stories I was watching. I brought them home. It must be hard.

Periodically, sadly, we read about cases where children are abused and die. I was also interested in how those cases affected other people in the system.

One person’s wrong can affect so many people, and I think that’s what happened in the case in my story. The woman who was negligent and had a drug problem, everybody else paid a price for that. And not only other families, but judges and social workers. These are not isolated cases. Sometimes we’re punished for other people’s wrongs.