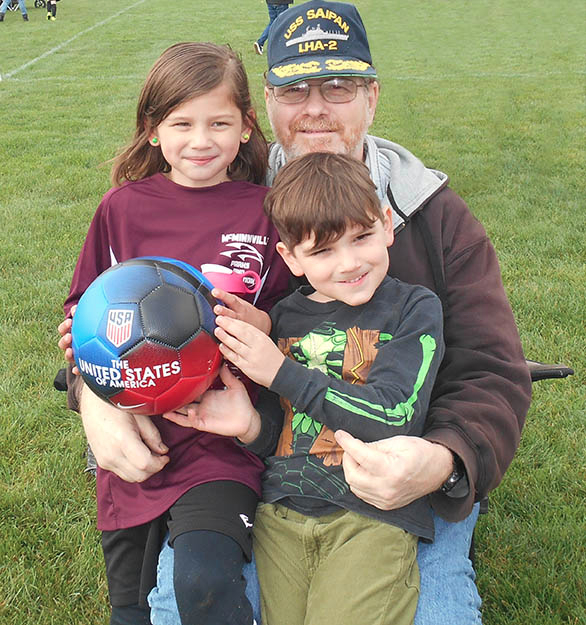 Before child welfare came into my family’s life, my understanding of the court system was that truth is found by careful and dutiful dissection in the court room; evidence is paramount and lies are dissolved. However, I have come to learn that in child welfare, there are flaws that tilt the scales of justice.

The family is considered guilty until proven innocent. The state’s Department of Human Service (as it’s called here in Oregon) has adequate funds for legal representation and experts, while most families do not. Children may be taken instantly, on little evidence, and their time apart from family is of no consequence to DHS.

This is our story. It could happen to anyone.

On October 1, 2011, my grandson was born. He was like his mother, stubborn, as he refused to come out. Two weeks after his due date, the doctor induced labor.

The delivery was scary. My grandson’s shoulders were stuck. He was blue and not breathing when he finally inched through. He came out bruised and had jaundice.

In my grandson’s first weeks, he was seen by several medical professionals. Jaundice required re-turning to the hospital for check-ups.

At the time, my daughter, her husband, and their 17-month-old daughter were between homes and staying with us. My wife and I were glad to spend time with our grandkids. My grandson was almost a mini-me: chubby, with auburn hair.

The nightmare started on Nov. 8, 2011, when my grandson was 5 weeks old. He had been fussier than usual, with an elevated temperature, and whenever he was adjusted for feeding or diaper changes, it was obvious he was in discomfort.

My daughter and son-in-law called a nurse, who instructed them to see a doctor. It was after 5 p.m., so they took him to the hospital. While being examined, the baby let out a horrific scream. The X-ray showed he had a fractured femur—his leg was broken and we didn’t know how it happened.

At that point, the doctor told my daughter and son-in-law that he was mandated to open an investigation. My grandson was transferred to a larger hospital in Portland for a battery of tests.

Then it got worse. The skeletal survey came back showing three fractured ribs and three “Classic Metaphyseal Lesions” on the leg bones, a type of fracture highly associated with abuse, although there are other medical explanations.

NO CHANCE TO SAY GOODBYE

The next day, we went to an emergency hearing in Yamhill County Court. We were not prepared. Up until the hearing began, my daughter had been at the hospital waiting for answers. Fortunately, an attorney we knew agreed to represent my son-in-law.

The State was prepared. At first, the judge ordered that my grandson and granddaughter be allowed to stay with their parents, under the stipulation that my wife and I be safety supervisors. Then the DHS caseworker again detailed the multiple fractures, and the judge changed his ruling. Our granddaughter could remain with us but my grandson would be placed in foster care.

We left devastated. My daughter sank to the floor in the hallway, crying in disbelief and pain. My grandson went straight from the hospital to a special needs foster home. We did not get a chance to hug or kiss him goodbye.

The first court hearing was set for almost two months later. Imagine having your 5-week-old taken, while believing that he must have some kind of medical condition, and the system just whisks him away for months. I don’t want to say that it’s like when a child dies, but it was very close to that.

Before the next hearing, we kept going over how this could have happened. Did we swaddle him too tightly? Were the straps on the car seat too tight?

But when the hearing came, the tone was “We believe you did this.” I wondered, “Why do they hate us so much that they won’t listen?”

I understood why child welfare got involved. I know that people abuse children. But what I didn’t expect was that the system seemed more interested in proving abuse than finding out the truth.

Plus, if the state thought we abused one child, how could they allow us to keep the other? It was surreal.

For 17 months, my daughter and son-in-law visited their son for one hour, three times a week. After about 6 months, my wife and I were also granted visits for an hour once a week. During those hours, we just hugged our grandson and played with him, trying to give everyone some of his time.

The goodbyes hurt. After each visit, my wife and I took my granddaughter to look at horses at a farm not far from our house. I would park on the shoulder and we would look out and sometimes talk to the ones by the fence.

Finally we provided the court a plan for an outside observer (a former DHS caseworker) to observe our visits and submit a report to the judge. She saw how well we cared for our grandson. After many visits, my grandson was allowed overnight and weekend visits.

FIGHTING TO THE END

We also kept fighting. We hired a lawyer and appealed the judge’s finding that someone had abused our son, but the appeals court did not overturn the lower court. The Oregon Supreme Court refused to hear our case.

The expense of fighting was mind boggling. So was the process.

The state and court required parenting classes, domestic violence classes, psychological evaluations, court hearings, meetings and visits—all on their terms and times. If you have a job that allows so many days off, you’re very lucky. For me, my job as a security officer became history.

Nothing in the world boiled me over as much as the court’s double standard. When we suspected that our grandson was being abused in foster care, we asked for a hearing. The court in its all mightiness scheduled a hearing for two weeks away. That was bad enough. Then a continuation was set for two months away. This was the same court that took our child in an instant.

The upshot of the hearing, however, was that the court agreed to send my grandson home.

My grandson was almost 2 the day he was released from the chains of the state. We were overjoyed. Soon he was on track to be a bubbly, active, fun little kid. Luckily, children are resilient.

My family is relieved to have our child home without having to admit guilt when it wasn’t true. Still, I’m writing my story because I want families to know that you don’t just have to say “OK” to everything they ask. I want doctors, investigators and judges to understand that their role is to find out what happened, not to presume. I want the media to keep telling the stories of families like ours.

People think, “That could never happen to me,” but it can.