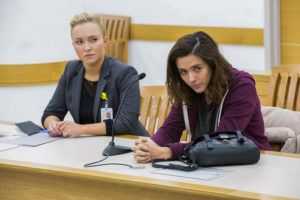 Rise hosted a screening of the film Custody, which was filmed in Manhattan Family Court and traced the shadow that a horrific case can cast across the entire system. Starring Viola Davis, Hayden Panettiere and Catalina Sandino Moreno, the film humanizes a mother caught up in the system and documents how minor challenges can cascade into a child’s removal for a poor family.

The screening was followed by a panel discussion featuring Jeanette Vega, a Rise parent leader whose oldest son was in foster care; Rebecca Boucher, an attorney for parents and Rise board member; and the Honorable Robert Hettleman, a judge in Bronx Family Court. The panel discussed what was real and unreal about the film, improvements in the New York City child welfare system over the past 10 years and areas of focus to improve how our public systems respond to the needs of fragile families.