When child welfare systems are forced to cut their budgets, often it’s preventive services that are hardest hit. The belief is that family 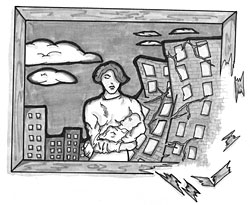 supports are nice if the government can afford them, but it’s investigations that prevent child deaths. But a 2012 study of 20 years of child deaths in Sacramento, Calif., found that cutting preventive services put children at risk—and wasted money.

Sheila Boxley of the Child Abuse Prevention Center, who headed the team that did the study, explained the findings:

Q: What connection did your report find between child deaths and funding for preventive services?

During that time, child welfare funding in Sacramento was cut by almost one third. With fewer resources, the department had to continue to do the things they are legally mandated to do—such as investigations and foster care placement—and stopped being able to do much prevention. Early family maintenance programs and early intervention services all but disappeared. A network of family resource centers was cut significantly. Visiting nurses took quite extreme hits. The Black Infant Health Program was also extremely cut.

There were just not enough services to meet the needs of children and families in Sacramento County.

Q: Should all preventive programs be put back?

A: No, what we’re saying is, let’s spend wisely on programs we know impact child well-being and prevent outcomes that include the death of children.

Insuring the well-being of our children is a moral imperative. There are also solid economic arguments for it. The Centers for Disease Control and Prevention estimated that a child abuse case ends up costing the government about $100,000 over the course of that child’s life. We know we can provide good preventive services for $1,200-$1,500 per year per child. That’s a huge economic argument.

Particularly in the area of child abuse prevention, when we make cuts to programs that work, we wind up paying more. In the very year we make those cuts, we wind up paying more for investigations, for foster care and for hospitalizations. It’s really pretty clear that, at least in California, when families who need supports don’t get them, they are very likely to return to the child welfare system within the same year with very serious situations.