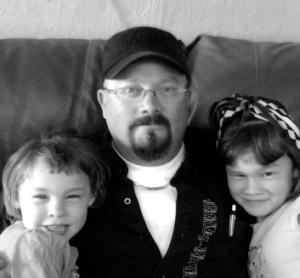 My kids were taken into custody in 2007. I was using meth and selling also.

I never, ever wanted to hurt my kids. I thought I loved them with all my heart.

At the time, Jayme was 2 and Sheryl was 3. My kids loved to be with me. I rode a bike with a trailer attached to the back that the kids loved to ride in. They would cry when I went somewhere by myself.

But I was also using every day.

I grew up in a home with parents who were good to us kids and I had a lot of friends. I was into sports and BMX racing. But at 12 I drank a beer-and-a-half in our backyard and that’s when I thought I’d arrived. After that, I moved on to weed and coke and eventually meth. My parents did everything they could to keep me on track, and I managed to finish high school, go to barber college and get a job in my dad’s shop. But all my money went to drugs.

By the time my kids were taken, I was living with them in my barbershop and spending my time going up and down alleys stealing copper and aluminum to sell for dope.

My kids had nice clothes and toys, and they ate pretty well. But there were also many times when I’d spent all my money on drugs and they had to eat ramen noodles. Other times I put them in situations they should not have been in.

When my kids weren’t with me they lived with their mother. She and I fought all the time.

Still, I thought everything was just fine. I believed that if everyone would mind their business my life would be OK. The truth of the matter is that dope was the most important thing and I could not see it. It is sad to admit but my kids came second.

Then one day I took some dope over to a motel room where my kids and their mother were staying with a guy who was also selling. I sold him some dope, visited my kids for a few minutes, and left.

The next day both my daughters started vomiting. I just thought they had caught something.

But a couple of weeks later, child protective services contacted my kids’ mother saying there were allegations of drug abuse around my kids. When they tested my kids, they tested positive for methamphetamines at very high levels. My kids had eaten it.

When they took my children into custody, my world fell apart.

Everyone I knew who’d had their kids taken never got them back. Today I see why, because they were still doing the things that caused their kids to be removed. But at the time I thought child welfare just wouldn’t give them back.

I also didn’t think I could stop using. I tried to get past the drug screens. I bought some pills to flush out my system with a gallon of water. But it didn’t work.

Shortly after that I found out who had called child protective services. I decided to kill him and save one bullet for me. I felt that I could not stand the pain any longer.

Running From My Feelings

The day I meant to kill him, I sat on the curb by his apartment for hours waiting for him to come outside so I could shoot him. But a cop came by instead and asked me what I was doing. When I told him I was there to beat someone up, he said I needed to leave.

After that, I ran into a friend and told him my plans. He talked me into going to a soup kitchen. He also asked to hold my gun, saying he would give it back when I was in a better frame of mind. As we ate, he told me that killing myself or someone else was not the answer. He convinced me to go to the mental health unit at the hospital. He was a guy I did drugs with regularly and I trusted him, so even though I was terrified of not getting high, I followed his advice.

I detoxed in the hospital for a few days, and the doctor told me that if I went to rehab things would work out. But rehab had a waiting list. After I did the intake there I went directly out to get high again to escape what I was feeling.

A few days later, the office of the attorney assigned to me called. I was still high so I made excuses, saying I was busy. A few days later my attorney, Linda Foster, called herself. She told me it would be a good idea for me to come talk to her.

When I did, she told me she had other clients who had gotten their kids back after they changed their lives. She helped me see that I had a part in what was going on. She told me what she could do for me and what I needed to do for her. I explained that I’d already done an intake at the rehab center and she said that was a great start. But when we talked about my kids testing positive, I still wanted to throw blame on others and minimize the situation.

Then she asked me one question I will never forget. She said, “How much methamphetamine is acceptable in a child’s system?” That is when I paused, and then I started to cry, because I knew the answer is zero. At that moment I knew I had to change but I was in total fear that I could not.

From there I went home to wait for a bed in rehab, but I just got more and more depressed. The night before Thanksgiving I felt so desperate I had to do something. I made a flag that was 3 feet by 4 feet that I mounted to my bike. On one side the flag said, “Do not use drugs or alcohol because it will take your children away.” On the other side it said, “Please GOD watch over Jayme and Sheryl.”

I set out on the morning of Thanksgiving with that flag on my bike and rode from church to church praying for God to help me get my kids back. At the last church I fell off my bike and was lying on the ground looking up into the sky, cursing God. I asked God why he would let something like this happen to me.

I remember being on my knees, telling God, “I don’t really know if you are there or if you will do anything for me but if I ever needed your help it is right now.” At that moment something miraculous happened. I had energy like I had not had in a long time. I rode my bike to my kids’ grandmother’s house to have Thanksgiving dinner. When I got there I explained what had happened. They all looked at each other like I was crazy.

But the next day, the day before my custody hearing, I got a call from the rehab center. They had a bed for me. They said I should check myself in after my day in court.

I was so scared, I felt like I needed to party one last time. I took my truck that was worth about $9,000 and sold it to a car lot for $1,000 so I could get some dope. But I still made it to court in the morning. When I told the judge I was going into rehab the next day the people in the courtroom gave me a look, like, “Yeah, sure you are.” But I made it to rehab too.

A Step in My Direction

In rehab, my child welfare caseworker, Gloria Taylor, came to see me. She said she wanted to know if there was anything she could do for me. I told her how difficult it was to be without my kids during the holidays and asked her if she could bring them to rehab for a visit. She said that wasn’t usually done but she would see what she could do. A little while later I got a message that my kids were coming.

I thought Christmas in rehab was going to be the worst Christmas ever.

But some of the people in rehab were very talented and they made drawings and toys out of paper for me to give my kids. I had a counselor who went out and bought a couple of dolls with some of my money for me to give my daughters. When they brought my children to see me we had Christmas on the floor of the rehab. I didn’t realize it at the time but it was a great Christmas.

Out the Other Side

After I got out of rehab I got involved in 12-step groups and my life started to change one day at a time. Soon the judge, Honorable Charles C. Currier, gave me my kids back. Then he asked me if I would like to be a mentor to parents going through the system in a program called First Steps Towards Reunification. I started attending meetings the judge held at the courthouse. There I saw that the judge had a big heart for people going through the system. He’s one of the greatest men I know. I started to feel like I was a part of something good.

Today I have been drug-free for six years. It has been the best gift I could give my kids. I also work full time in the courthouse and that same judge is my boss.

I tell my story to parents going through the system and I am a mentor if they want encouragement. I’ve also had the opportunity to speak in places I would have never otherwise gone. I recently received an award from the 21st Annual Children’s Law Institute for service as a leader in child welfare.

I see myself as a parent who has made it to the other side. I want to help other parents have hope. Today I see things with a new set of glasses. Life is better than I ever thought that it could be.